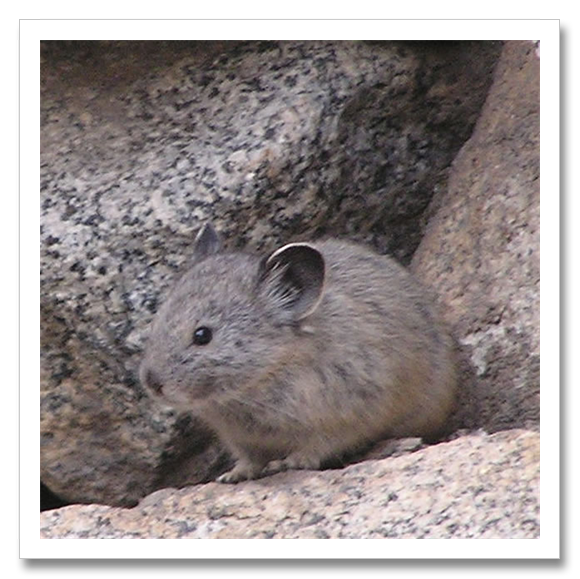 This little guy is one of my (and my wife’s) favorite animals on the planet. It lives in alpine scree or talus slopes – giant rock piles created as craggy mountains disintegrate over eons. These rock piles are devoid of trees and have scanty alpine vegetation (arctic tundra basically) in patches where a little dirt has accumulated.

The pika is a baby rabbit sized rodent with the industriousness of Henry Ford assembly line. They work tirelessly through the fleeting alpine summer to gather enough "pika hay" to last them through the winter. Their Pika hay" is nothing more than grass and those abundant and hardy high altitude alpine wildflowers that are common above treeline.  They store their hay in the crevasses of the rock piles – between the millions of rocks that they call home.

One of my favorite memories of these cute little creatures was from my honeymoon. My wife and I were married in Teton National Park, on the banks of the Snake river outside of Jackson by the local justice of the peace who was the spitting image of a young John Denver.  We backpacked in the Tetons’ for our honeymoon, first crossing Jenny lake at the foot of the mountains in one of the old reliable shuttle boats that takes hikers to the automobile inaccessible trailhead.

Our stay in the high Tetons was brief but nothing short of spectacular. We camped in an alpine meadow, surrounded buy what are undoubtedly the most picturesque mountains in the lower Rockies. As the sun was striking our tent that first morning of our new marriage, we were awakened by the persistent pyeew…. pyeew… of the pika’s call.  One of these little furballs was especially close to the tent and we rejoiced at our good fortune.

The call of the wilderness was just too great. We knew what awaited. Out into the magnificent mountains we tumbled to be greeted by rock and ice, blue sky and one seriously perturbed pika.  It seems we had pitched out tent on it’s favorite hay field. The poor little guy admonished us until breakfast was had and camp struck.

The little guys can’t stand something associated with the warming. It may be that their "hay" is being replaced by shrubby species now that the climate has moderated, or they succumb to the heat. So they have moved up the mountain where the rock fields and scree allow, or simply disappeared in other places.

Repeated attempts to get the pika listed as endangered have failed. http://www.biologicaldiversity.org/species/mammals/American_pika/

From Nature Climate: Rising temperatures may be to blame for the disappearance of a mountain-dwelling mammal. Recent climate change in the American West has substantially increased the rate of local extinctions of one small, mountain-dwelling mammal and has spurred surviving populations to move to cooler spots upslope, a study suggests. Erik Beever, an ecologist formerly at the University of Nevada, Reno, and colleagues compared the modern and historical ranges of the American pika within a 38-million-hectare area centered on Nevada 1. Surveys taken between 1994 and 1999 revealed that pikas were missing from six of the 25 study sites where they had been recorded from 1898 to 1956. But tallies taken at the same sites between 2003 and 2008 revealed another four extirpations, generating a nearly five-fold jump in local extinction rate. The most recent surveys revealed that the low-altitude edge of the pikas’ range had moved upslope about 145 meters since the 1990s, about 11 times the rate of retreat seen during the twentieth century. Because pikas don’t migrate and are generally faithful to their locale, the researchers speculate that rising temperatures have driven the heat-sensitive creatures from many sites they formerly inhabited. References Beever, E. A., Ray, C., Wilkening, J. L., Brussard, P. F. & Mote, P. W. Contemporary climate change alters the pace and drivers of extinction. Glob. Change Biol. doi:10.1111/j.1365-2486.2010.02389.x (2010).