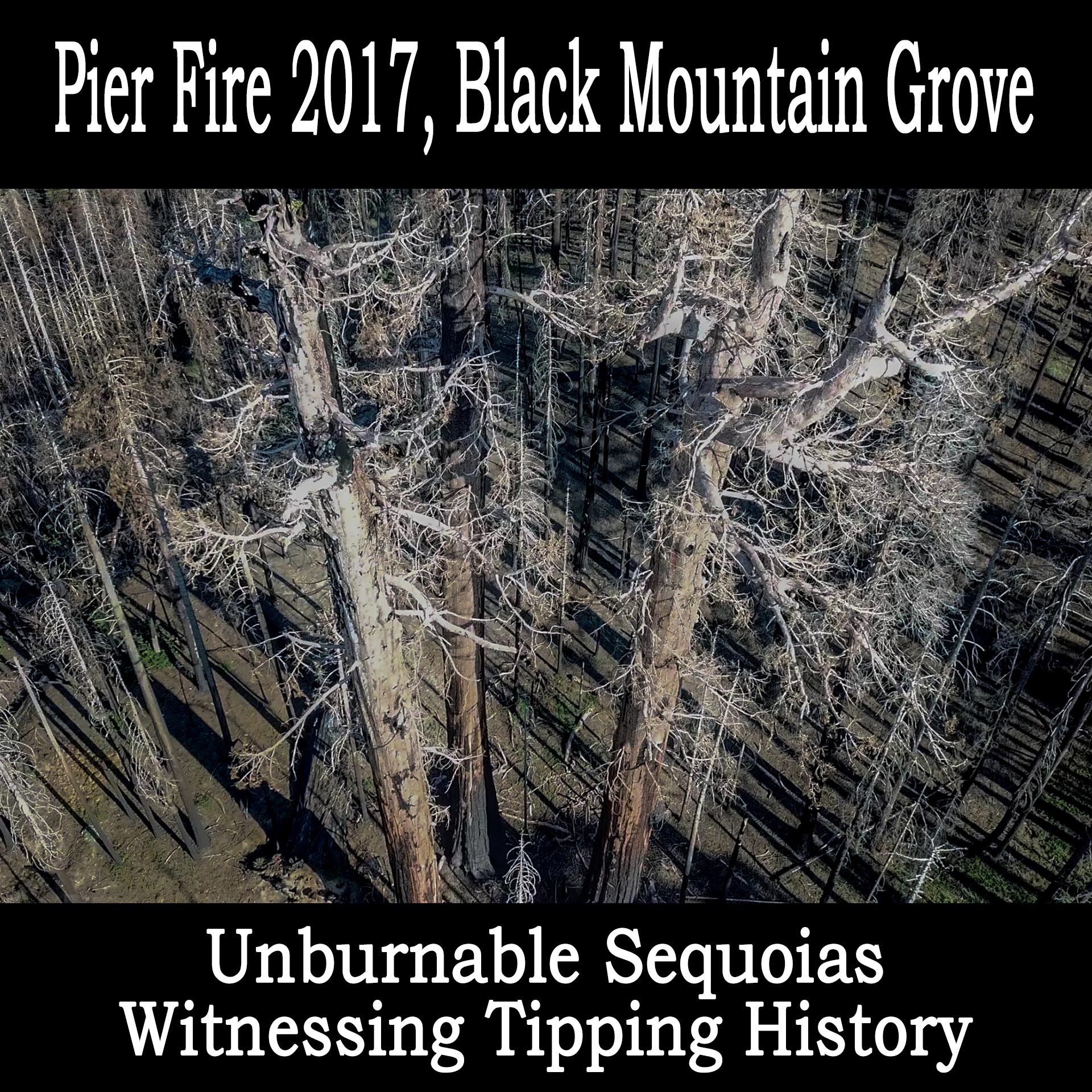 July 2019, Sequoia National Forest – We had been driving the Pier Fire burn for two days. Two days in the black. We camped at the intersection of two logging roads, parking in the middle of the widest spot, as we had only seen two vehicles. 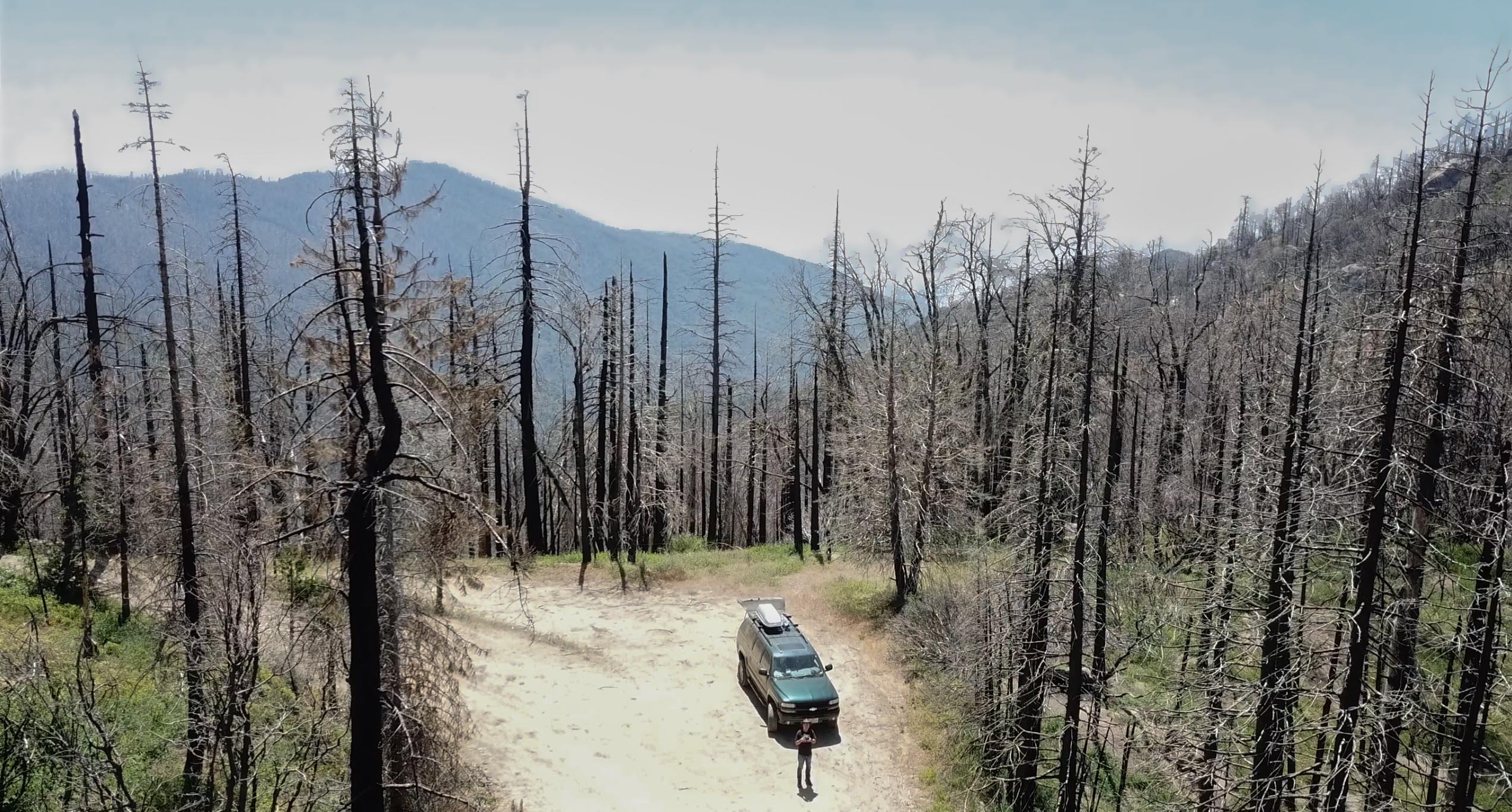 This was the Black Mountain Grove, east of Nelson Camp. The fire was unusually extreme with little mosaic of lesser burned areas. This fire was one of the first tipping point fires driven by not only excess fuels from fire suppression, but six other climate change-caused extreme fire behavior mechanisms that have emerged since the middle of the twenty-teens: record dry fuels from climate change drought, record low humidity, higher temperature creating easier ignition and more extreme burning, record wind storms, longer drying with earlier spring and later onset of fall conditions, and increased nighttime fire behavior. (1) Because of these six climate change-induced fire enhancing factors, CalFire says fires are now burning 400 degrees hotter. (2) 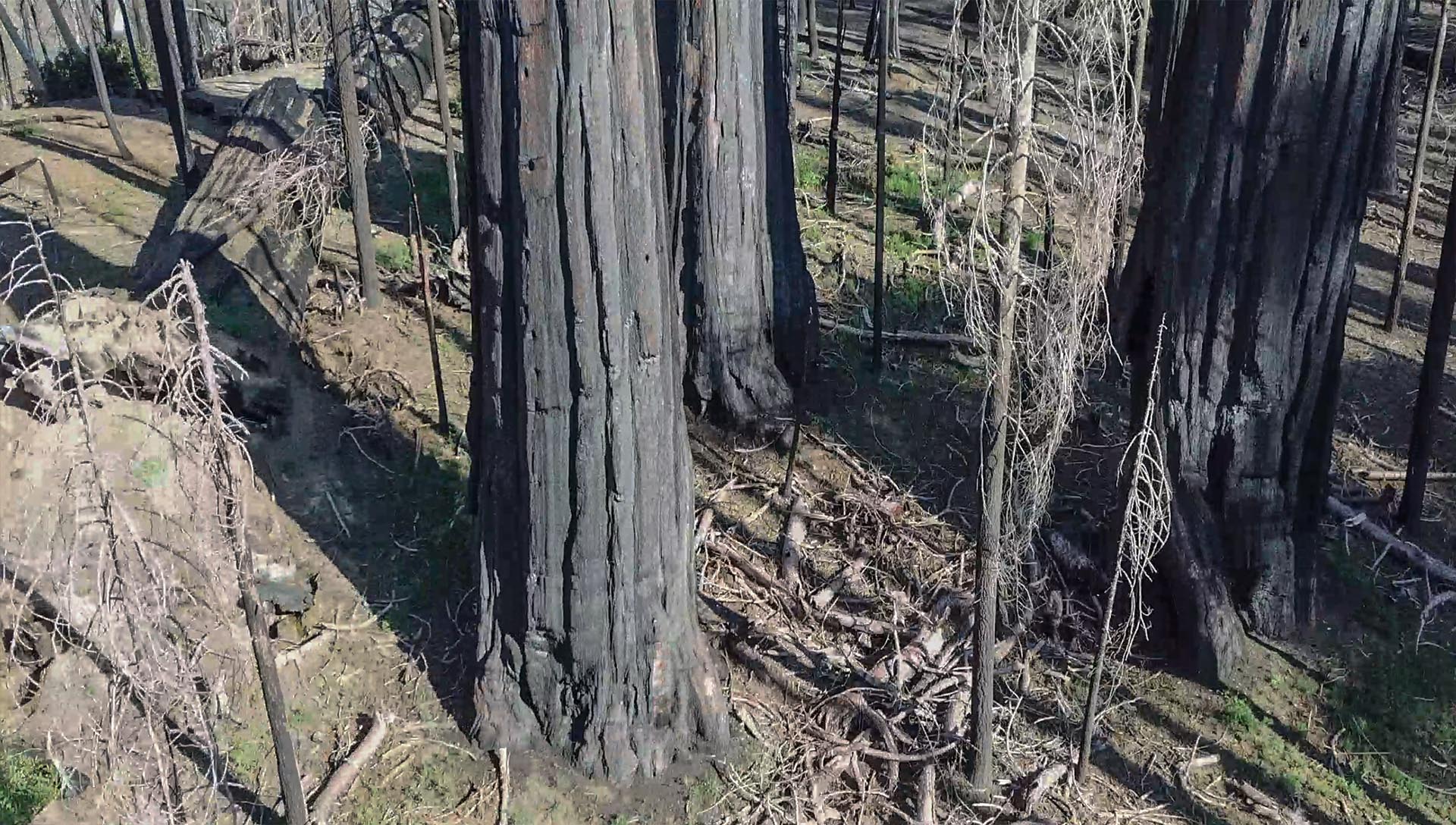 The base of the four giants from the cover photo. Note the fallen sequoia on the left.

Nearly twenty percent of all sequoias were killed by climate change-caused wildfire in 2020 and 2021. An estimated 12,000 mature giants ended their thousand year reign. (3)

Rocks were split and trees exploded from expanding sap. Towering black spires pointed at the cloudless sky. Few trees had fallen yet, though their looming was ever-concerning.

Pioneer annuals and grasses had sprouted but mostly the black ruled. Very few trees of any kind were resprouting, including sequoias. A third of fires in the West burning since the turn of the century have not regenerated at all and half are regenerating at only half the twentieth century rate. (4) 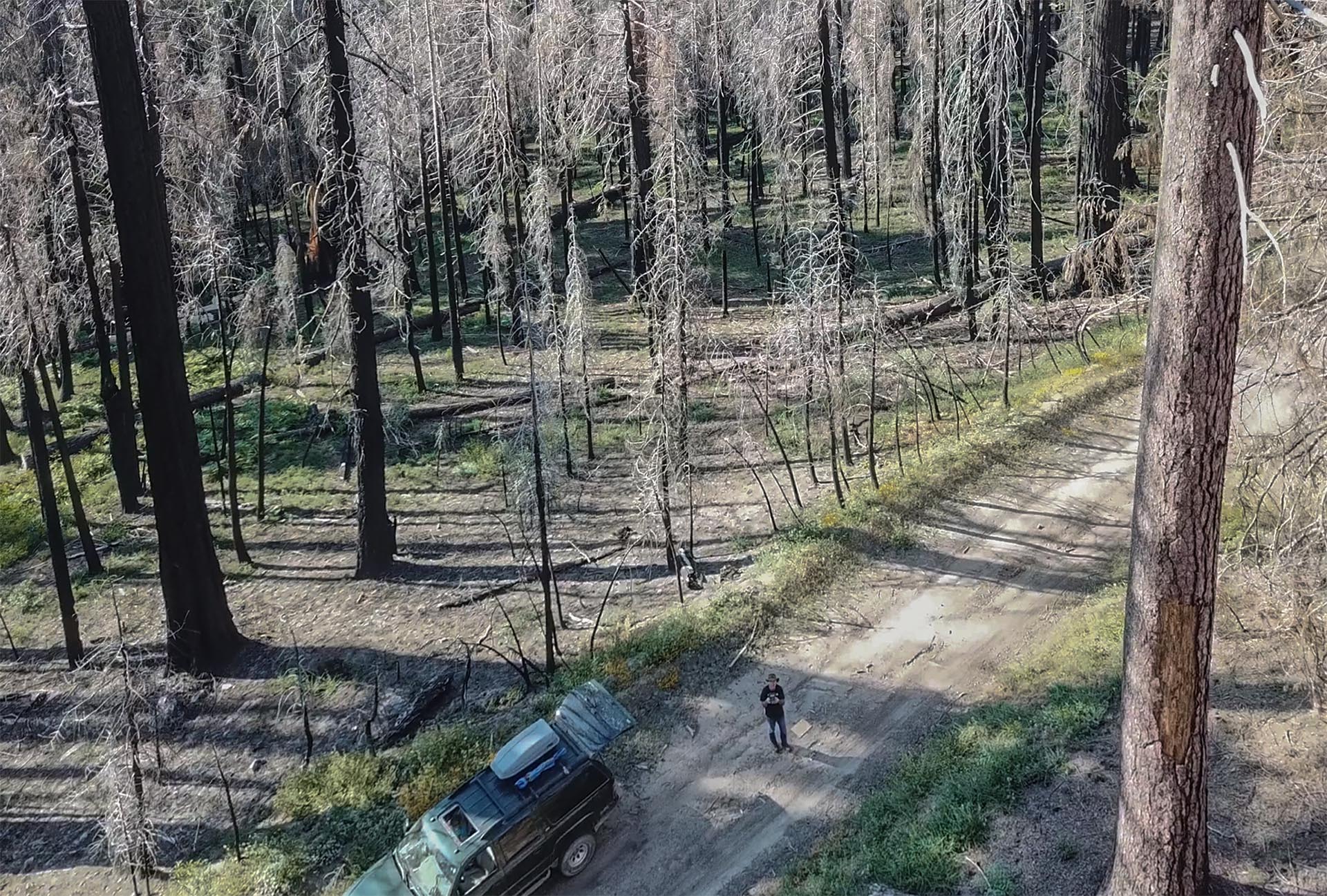 Driving a burn is not like driving in a forest. The contrast between black and light is confounding. It’s dry. Really dry. The smell of burn is no longer ever-present after two years, but it lurks. The lack of life is usually a sign of rebirth, but our climate’s warming beyond her evolutionary boundaries has put “normal” regeneration on hold.

We were headed out. Our time documenting was over here. The moist coastal redwoods were our next destination; green, lovely, soft, cool, moist, threatened.

A grouping of three burned giants appeared on our right, hidden behind us on our way in. I put the drone up and flew over to the grouping and observed a fourth that had fallen in the apocalypse; a 12-inch lodgepole pine growing on its root ball rode down with the giant.

The view from above was staggering. This natural force, killing these unkillable giants, was in itself a natural thing, though caused by us. It happens every time our climate changes abruptly. The last time could have been as much as 10,000 years ago when Earth warmed out of the last ice age.

The giants were bleached white, not uncommon, a trait of extreme fire behavior. These three torched as the behavior is called. The mature forest of lodgepole pine below the giants had preheated this small grouping of thousand-year old trees and then a gust swept the flames into the tops of the sequoias sending flames one or two-hundred feet skyward above their tops. A tower of flame 400 or 500 feet tall lit the region like it was day but only for a minute, then all needles and small branches were consumed and the giant torch was snuffed leaving the bleached bones of the sequoias towering over the rest of the forest. Fifty-two of the 183 mature sequoias in the Black Mountain Grove were killed. (5)

Sequoia and Kings Canyon National Parks says this about these fires:

“Prior to the recent severe drought, research about giant sequoia mortality suggested that large sequoias typically died by falling or, occasionally, having extensive crown scorch from fire. Death while standing, unrelated to crown scorch, was almost never observed by scientists who had spent decades working in the Sierra Nevada. And while mature giant sequoias did die from fire impacts; that were a relatively rare event, typically the result of many accumulated injuries over their long lives. The hotter drought of 2012-2016 appears to have been a tipping point for giant sequoias and other Sierra Nevada mixed-conifer forests. In hotter droughts, unusually high temperatures worsen the effects of low precipitation, resulting in greater water loss from trees and lower water availability. This is an emerging climate change threat to forests.” (6)