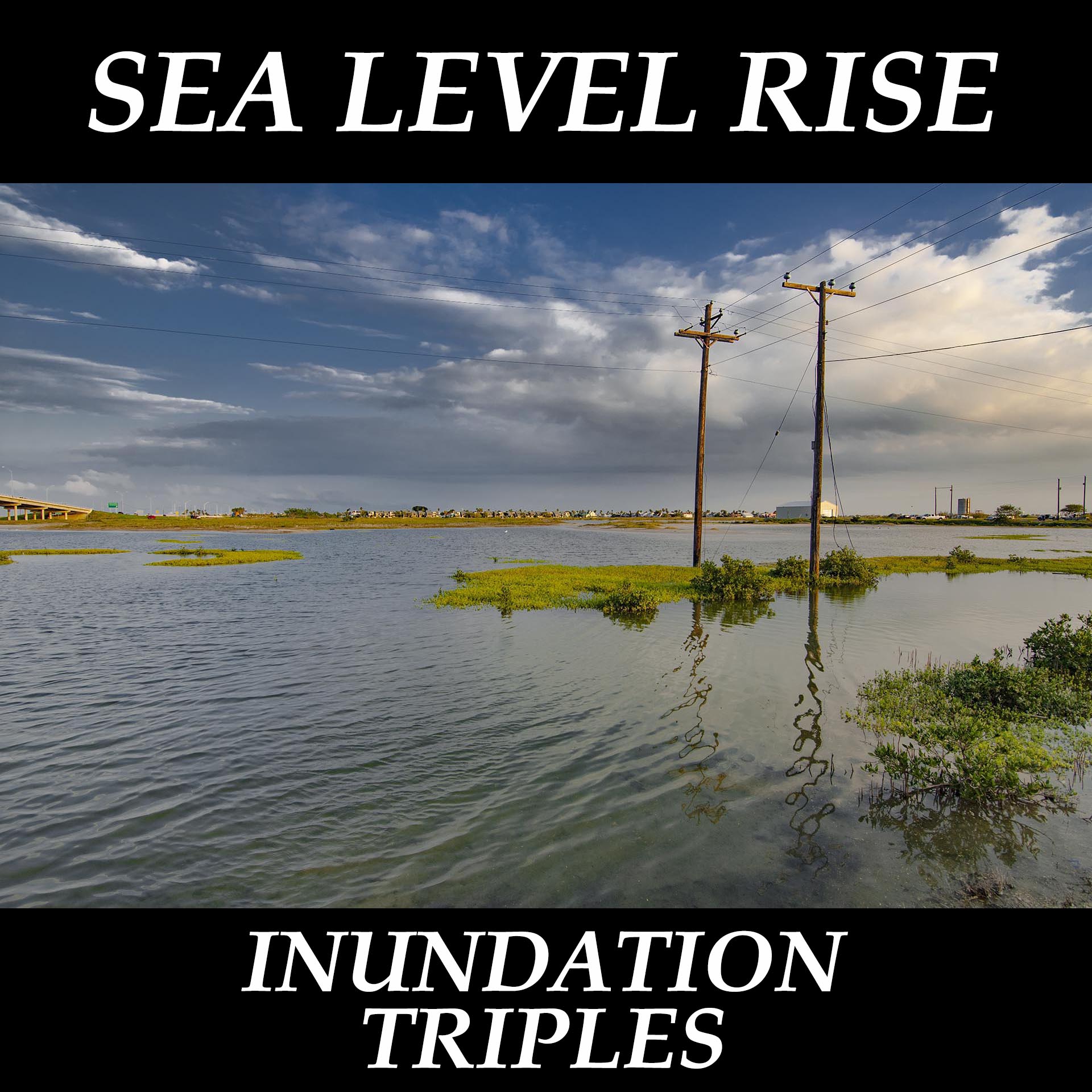 Drs. Kulp and Straus at Climate Central used new tech satellite elevation data to update leading sea level rise projections.  Before this work, satellite elevation data looked at the top of plants, trees, buildings, etc. This new satellite techs looks at top of dirt. On average, the elevation error with the old satellite data was (+) 1.7 meters (5′ 6″) globally The new elevation data error with this new top of dirt tech is between (+) 0.01 and (+) 0.11 meter (1/3 inch to 4 inches). So it’s easy to understand why the number of people/structures inundated tripled above previous estimates with Climate Central’s new model. Accurate sea level measured to the top of dirt is 1.7 meters (5 foot 7 inches) lower than the old top of object data.

The rest of the story is a bit more bleak as is everything with climate change. Remember though, climate restoration to within the evolutionary boundaries of our Earth systems at warming of less than 1 C, stabilizes or restores almost all of these tipping collapses that are now ongoing.

Sea level rise from Kulp and Straus 2019, in meters: Supplementary Table 1 below. 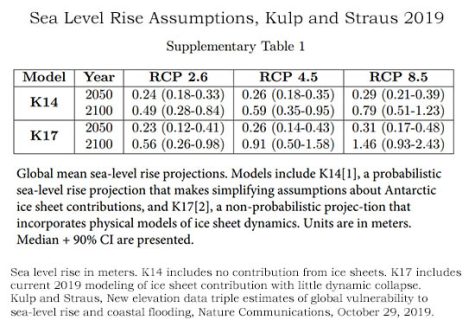 From RCP 8.5 above, the worst-case warming scenario, Kulp and Straus used 1.46 meters (4′ 8″) sea level rise in their population modeling. The Intergovernmental Panel on Climate Change (IPCC) sea level rise projections from its recent Assessment Report 6, worst-case scenario, is 1.00 meter (3′ 4″) by 2100 with a range of 0.70–1.60 m. This is the power of sea level rise. Because very few live right at sea level, but very many live close to the coast, every foot above sea level sees a rapid rise in population affected.

Kulp and Straus Results, Worst-Case Global Population Impacts: Notice the sea level rise from Kulp and Straus that has been highlighted here (1.46 meters) is the worst-case scenario. There is a maxim in climate impacts that we need to follow to be safe. Because almost every single climate impact is occurring generations to a century ahead of long-held projections, we must follow the worst-case scenario when we evaluate our possible climate change futures. Kulp and Straus project worst-case population impacts by 2050, of 150 million people (range of 130 to 180 million) being permanently inundated and 300 million flooded (range of 270 to 340 million) on average once a year. Worst-case by 2100 is 340 million people (range of 220-520 million) being permanently inundated and 480 million (range of 380 to 630 million) flooded on average yearly.

The 1-year maximum high tide is obviously a problem. This is the maximum daily tide that happens every year on average over long time frames. Insurance standards protect against the 100-year event, or the event that happens on average once every hundred years over very long time frames.  Why does climate science report impacts that are literally 100 times more common than we as a culture have decided we must be protected against with insurance?

The 1-year max tide is a very poor planning instrument for anything except abandonment and then, almost all except the most valuable properties will be abandoned long before they see inundation as frequent as once a year. We should be protecting our safety and resources to the same standards the insurance industry has developed where NOAA’s worst-case 100-year tide is 13.5 feet (4.1 meters) above today in 2100 at Miami, and this is a normal maximum daily tide, not a storm tide (Sweet 2017). IPCC says 3′ 4″ of mean sea level rise by 2100, Kulp and Straus say 4′ 9″ is the 1-year high tide, or the extra high natural tide that happens on average yearly.

One of the most meaningful climate impacts statements I have ever read is that IPCC AR5 tells us that adaptation is limited with sea level rise of greater than 3 feet (1 meter) per century. The reason is money. There is so much of our world’s wealth $1,500 trillion in assets located near enough to sea level, the infrastructure adaptation costs are just too high. There is not enough money in the world to adapt once the rise exceeds 1 meter per year — under existing scenarios. Under a restoration scenario, sea level rise stabilizes and adaptation to the new stable sea level height is possible. It’s the continuing sea level rise of existing scenarios that is existential, with additional warming from today, where currently activated ice sheet collapse does not self-restore unless our climate is restored back to within the evolutionary boundaries of our Earth systems.