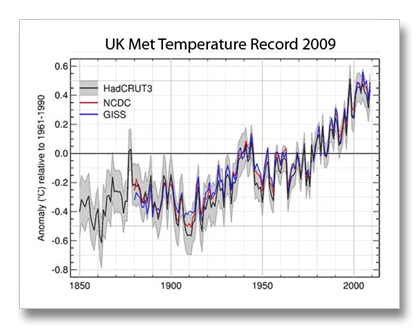 It never ceases to amaze me  – the tenacity of the dedicated climate skeptics. Now they are leading a race to see how many people they can convince that climate change is not real because they say we are not setting a global temperature records every single year.  They do not understand that the chaos of weather makes it extremely unlikely that this will ever happen.  We can see how this chaos affects our global temperature from year to year by looking at the GISS and UK Met Office Temperature records. The UK Met’s annual temperature graph is slightly different form the GISS dataset (The U.S. Government Record from NASA).  The Met office calculates global average temperature a shade different from GISS and consequently 1998 is the hottest year in the UK Met record, whereas 2005 is the hottest year in the GISS record. Neither GISS or the UK Met are wrong. Each has a different way of calculating a global average temperature from global records. But the skeptics will say otherwise. So, what really matters is the trend. The absolute temperature is not all that important, it is the trend that matters. 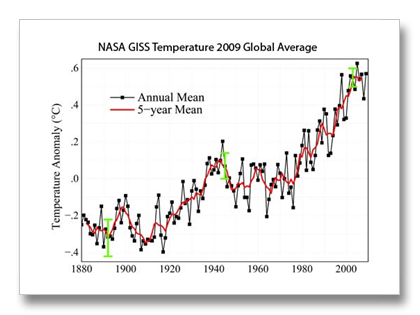 The GISS record shows that it has been four years since we set the last high temperature record, before that it was five years. After 1990 it was six years before a new high temperature record was set. After the high in 1981 it was another six years. Then it was 37 years after the high set in 1943 until another global high temperature record was set. Earth’s temperature has NOT cooled since the turn of the century. Remember when the climate scientists said, back in the early 1980s, that it would be twenty or thirty years before we new for sure if climate was changing or not?  Bingo!  It’s the chaos that prevents the short term assumption. Before 2009, 2005 was the hottest year ever, Before 2005, it was 1998, etc.  the trend is still upwards. This is simply chaos, or noise in the data. It is completely normal and will continue to happen like this into the future. Call me back about this one in twenty or thirty years.