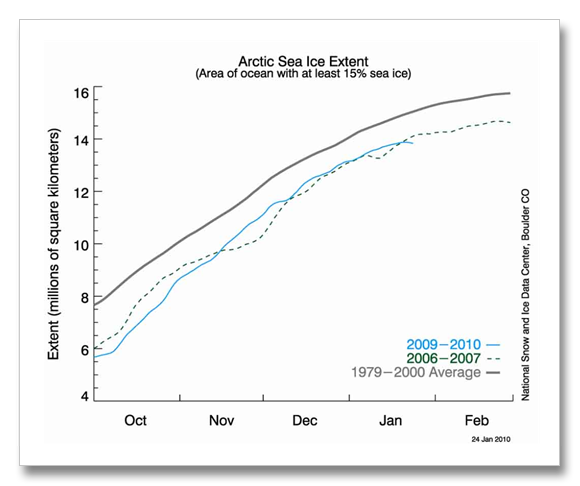 In the U.S., 2009 was 0.3 degrees F above the 20th century average. The solar minimum continues. The two year lag from the Pacific Decadal Oscillation continues. This is why it is not 1.3 degrees above normal or more. I have attached a view of Arctic sea ice extents from the National Snow and ice Data Center. This is an image not normally seen in the middle of winter. But look where sea ice is right now. It is following almost exactly along the record setting year 2006 – 2007,  There was an article that I looked at a few days ago, but didn’t publish that said that there was some questions about last years measurements. The paper came from a polar scientists doing research in the Beaufort Sea up there north of Alaska.   The World temperature last year was the second warmest ever recorded. It was the warmest year ever recorded in the southern hemisphere. The last ten years was the hottest decade ever recorded.