Yes there was a mistake in the 2007 IPCC report, I am sure there were more than one. The biggest mistake is that the report does not go far enough in projecting future climate change. Virtually everything that the report has projected has been proven to be conservative. There are even a number of things that climate change has started to have impacts upon, that are not even considered in the report. Things like feedback from dying forests and accelerating undersea methane clathrate emissions. Not to mention numerous things that happened between the time that the IPCC quit taking papers ( in some cases as early as 2005), and the date of publishing in late 2007.  So it is not likely that the glaciers of the Himalaya will melt by 2035, those in Glacier National Park will melt by then. 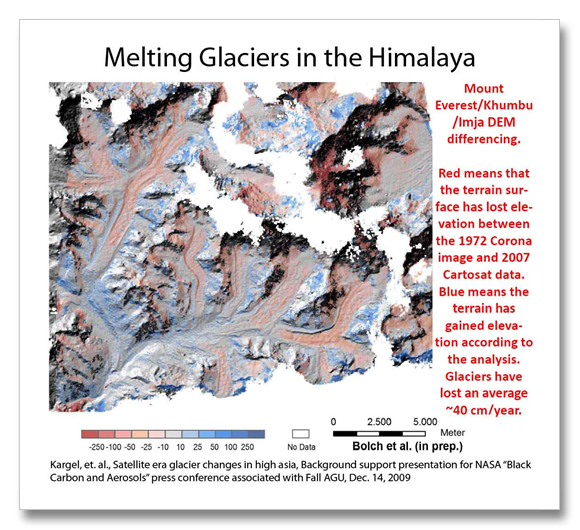 The claims that the 2035 date was off by 300 years are ludicrous. sure, it may be 300 years before every block of ice is melted, in the same light that it will be 2100 before Earth’s temperature increases by 11.5 degrees. By the time it get’s 11.5 degrees warmer – we will be toast. In 20 or 30 years, the glaciers catastrophes from the current melt lakes bursting and flooding in unprecedented ways will be passing and great famine from dwindling water supplies will be the great threat. Who cares if there was one paragraph in the report that was worded wrong. Millions will die, probably 10s of millions. Does this mean that Pauchuri should resign? That’s preposterous.

The glaciers in the Himalayas are melting. Their melt has significantly accelerated in the very recent past, and the results will very likely end in huge catastrophes as these glacial melt lakes burst their frail moraine dams and flood the countryside below.  These melt lakes are forming by the hundreds. They are forming very quickly and the risks are enormous. The will ese lakes are very fragile and geologically unstable. A friend of mine actually just returned from a filming trip to the Bhutan to investigate. His movie can be seen at the Texas Spirit Theater of the Bob Bullock Museum. My friend is Pat Fries, Owner of Arrowhead Films here in Austin. His film Silent Tsunami can be seen here.

The image to the right is a satellite view of the area of the Himalayas around Mount Everest. You can see Mount Everest in the upper middle are of the image. The river-like looking structures are glaciers. Red means that melt has occurred. The analysis says about 40 cm per year (16 inches) on average since 1972. Of course we know from other studies that this rate has accelerated.

This image is from a backup material presentation given at a press conference by NASA in December 2009. This presentation includes 46 pages of information about the melting glaciers of the Himalaya. Like the rest of the world, there are some glaciers that are not melting, or whose fronts are surging (one can not say that these glaciers are not melting, but one can say, and this NASA presentation makes this clear, that determining a timeline for Himalayan glacier melt is very difficult given the state of knowledge today.  The mass balance solution for any individual glacier in this condition is very complicated.  Glaciers that are retreating as well as thinning though, are fairly easily identified as "melting". This is the state of the vast majority of glaciers across the world, and most of them are melting rapidly.

We are likely where we were in the analysis stage of the Himalayas as where we were with Greenland twenty years ago. The estimates of melt are likely conservative. Twenty years ago we understood that it could take thousands and maybe even 10,000 years for Greenland to melt. Today we know that it could likely happen in less than a thousand years and possibly even several hundreds of years. A link for NASA presentation is given below.