One of the quotes in the report states "There continues to be widespread and, in some cases, dramatic evidence of an overall warming of the Arctic system." 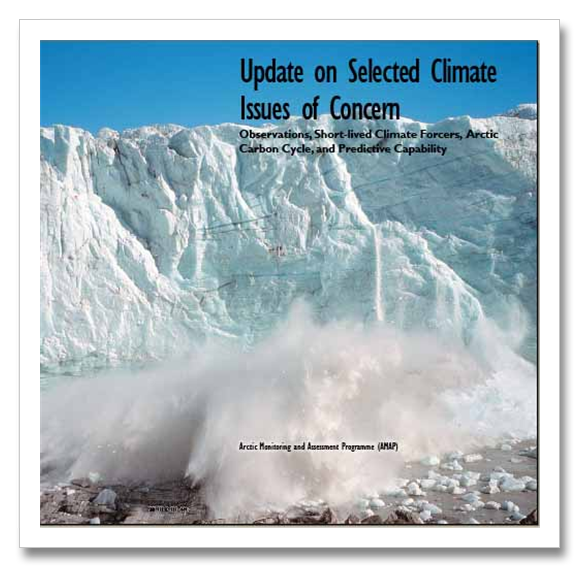 The Arctic Monitoring and Assessment Program is one of five Working Groups of the Arctic Council. The primary function of AMAP is to advise the governments of the eight Arctic countries (Canada, Denmark/Greenland, Finland, Iceland, Norway, Russia, Sweden and the United States). Four Indigenous Peoples Organizations and twenty three observing countries and cooperating international organizations are a part of AMAP.

Warming in the Arctic is greater than ever recorded and is occurring faster than anticipated. Sea ice has decreased sharply, faster than expected, and the Northeast and Northwest passages were open for the first time ever in 2007 and 2008. Most of the ice in the Arctic is now single year ice, that is very easy to melt every year and shrubberies have started to grow in the tundra.

Many of these things may sound innocuous, but they have hidden and unexpected impacts. Take the growth of shrubs in tundra country for instance. Snow reflects 90% of the suns energy completely back into space. Winter snow easily covers tundra, but when shrubs start to grow, the snow depth must be much greater to cover the greenery.  This greenery can capture 70 to 80% of the suns energy and change it into heat where it stays on the planet unlike that energy that is reflected back into space by snow. So there is a difference of 8 or 9 times the amount of heat generated between snow covered tundra, and shrubs that extend above the snow cover. This is an immense amount of heat to add to an Arctic ecosystem.

Permafrost is warming and melting. Snow cover is decreasing by 1% to 2% per year (by half in 30 years). Ice free areas in the Arctic Ocean were as much as much as 9 degrees warmer than their long term average. While growth in tundra areas has increase, growth in boreal forests has declined.

Melt on the Greenland ice Sheet was the largest ever recorded in 2007 and 60% greater than the last record year of 1998. Bird nesting and insect emergence occur two weeks earlier and the active growing season has extended by one month. Eurasian and North American runoff into the Arctic have both increased.