The Potential for Catastrophic Sea-level Rise in the Near-future is Confirmed: 6.5 to 10 feet in 10 to 24 years at Xcaret reef, Yucatan Peninsula, 120k yrs bp

April 27, 2009 Teams from the Institute of Marine & Limnological Sciences, at the University of Mexico and the Institute of Marine Science in Germany published a report in the April 9 scientific journal Nature that shows a sea level rise of six and a half to ten feet in 10 to 24 years because of a catastrophic ice sheet disintegration. This sea level jump compares similarly to those seen during the rapid warming out of the ice ages only this one was right in the middle of the Penultimate Interglacial – the last time Earth was as warm as it is today. This abrupt sea level rise happened about 120,000 years ago. The temperature then was likely several degrees warmer than today, similar to what the latest computer models say we sill see 2030 or 2050. 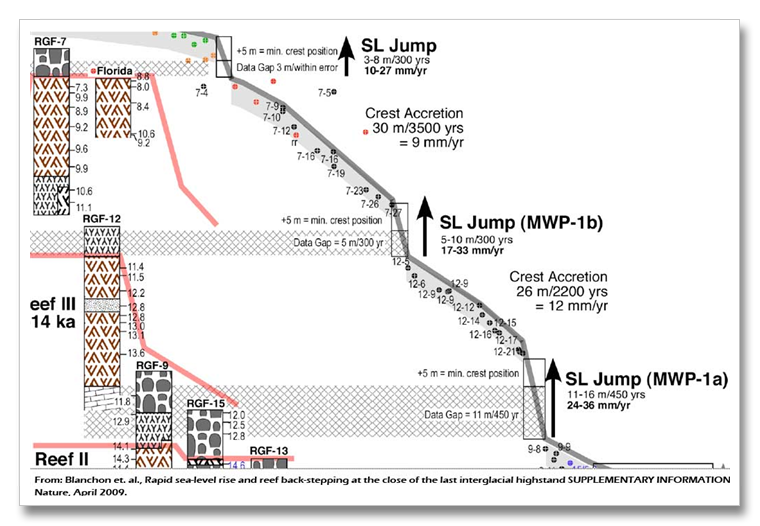 The one big difference however is that today we are pushing climate much harder than it has been pushed during the most unstable periods in the last dozens of millions of years.  During the last interglacial, the climate forcing was relatively calm compared to those during the unstable periods coming out the ice ages.  It is these unstable periods where most of these abrupt sea level jumps occur. The most widely known are the 16 to 20 feet jumps recorded in Barbados 18,000 years ago (16 to 20 feet) that occurred as a result of the end of the last ice age.

Now the scientists have discovered that this sort of thing happens in between ice ages, in the "interglacial warm periods" between ice ages. This research was done at a place called Xcaret on the Yucatan Peninsula in Mexico.

The most likely culprit is the West Antarctic Ice sheet. In a world similar to our world today, which is what the world was like 120,000 years ago, it is likely that the West Antarctic Ice Sheet, like today, was the only marine ice sheet in existence.  It is these marine ice sheets that are unstable and capable of catastrophic disintegration. What makes them so unstable is that they rest on bedrock a thousand or more feet below sea level with ice towering thousands of feet above sea level. As a warming ocean melts ice below sea level the buoyancy of the ice is changed causing the instability. The dynamics are poorly understood, but the results are not.

This team of scientists discovered these prehistoric sea level jumps the same way that those in Barbados and other parts of the world were found – by looking at coral reefs. The reefs are cored to see what their hidden growth layers reveal. These layers show growth over time and are very similar to tree growth rings. The scientists looked at the continuousness of the growth record and they looked at physical things like sediment deposition, mass die-offs and algae buildup.

When a reef is suddenly submerged by a rapid sea level jump caused by disintegrating ice sheets or land subsidence from volcanic actions or earthquakes, etc., the shallow water corals often die. Algal mats form on the dead corals and sand and sediment becomes trapped in these new layers. Then, as ecological time moves forward, new corals grow that are more at home at greater depths. This series of events forms a very distinctive pattern in the coral cores that were recovered by the research team at Xcaret.

What they found was there was one to two generations of coral missing from the record, there was a mass die off and a layer of sediment typical of that formed in other areas by abrupt sea level rises. The particular species of coral that was missing was the elk horn coral with an average life span of 10 to 12 years.

The implications, like so many other newly discovered impacts of climate change on a slightly warmer planet from melting permafrost to ocean acidification, if left unchecked, are going to create dire consequences for the planet.

The lead scientist from the Mexico/Germany research team (Dr. Paul Blanchon) says in his report: "In our warming world, the implications of a rapid, meter-scale sea level jump late during the last interglacial are clear for both future ice sheet stability and reef development.  Given the dramatic disintegration of ice shelves and discovery of rapid ice loss from both the Antarctic and Greenland ice sheets, the potential for sustained rapid ice loss and catastrophic sea-level rise in the near future is confirmed by our discovery of sea-level instability at the close of the last interglacial."