Delayed for nearly a decade by the Bush Administration, as soon as Obama came into office the EPA went back to work. 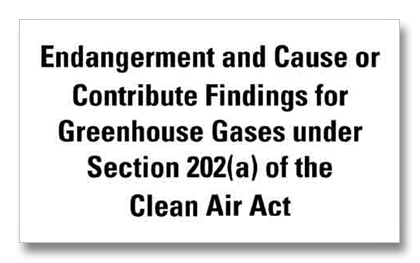 “This finding confirms that greenhouse gas pollution is a serious problem now and for future generations… In both magnitude and probability, climate change is an enormous problem." The press release goes on to state:

"In addition to threatening human health, the analysis finds that climate change also has serious national security implications. Consistent with this proposed finding, in 2007, 11 retired U.S. generals and admirals signed a report from the Center for a New American Security stating that climate change “presents significant national security challenges for the United States.” Escalating violence in destabilized regions can be incited and fomented by an increasing scarcity of resources – including water. This lack of resources, driven by climate change patterns, then drives massive migration to more stabilized regions of the world."

There are no regulations connected to the "Endangerment Finding". It is the initial action that leads to regulation. This is the same procedure that happens, or happened with other dangerous byproducts of our human existence like lead and ozone depleting chemicals. The EPA has stated that they would rather control greenhouse gasses through legislation, which is likely not a good idea. What this action has done however, is to allow science to rule our lives. If the forthcoming legislation is as weak as it appears it is going to be, the EPA will now have the tools available to appropriately regulate greenhouse gasses.

EPA Technical Support: This is a great document (171 pages) about the current state of our climate: http://epa.gov/climatechange/endangerment/downloads/GHGEndangermentProposal.pdf