A new mega report by the  International Union of Forest Research Organizations states the obvious. Persistent drought, insect infestations and disease have increased just as the scientists predicted they would over 20 years ago. These problems have already had enormous impacts on the forests of the world and those impacts are increasing in severity and the accelerating patterns are expected to only worsen.  IUFRO is "the" global network for forest science cooperation. It unites more than 15,000 scientists in almost 700 Member Organizations in over 110 countries. 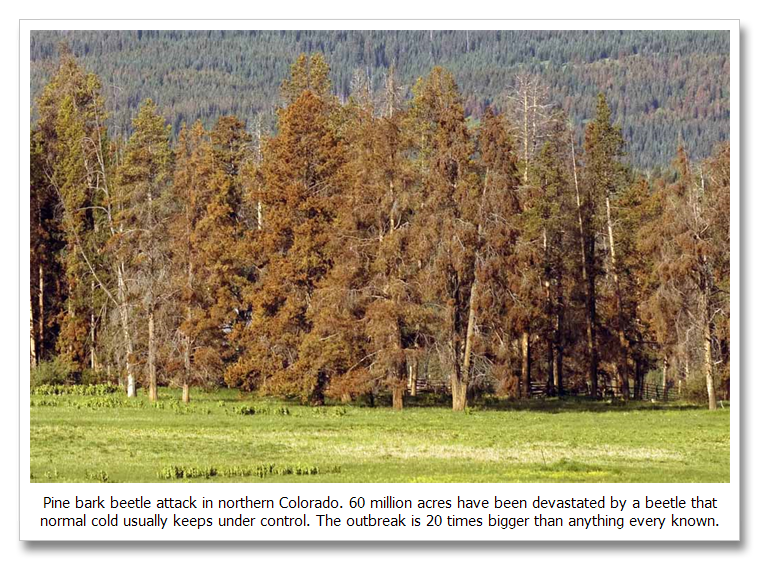 Most people have never heard that our forests are in trouble. Most folks have never heard of the great pine beetle pandemic in the North American Rockies.(see here) It has killed 40 million acres of trees in a little more than a decade, or that this outbreak is ten times larger than the last biggest outbreak that occurred just ten years ago on the Kenai Peninsula in Alaska that was 3 million acres.  The photo above is from the Steamboat Springs, Colorado area in 2008. Over 2.5 million acres have been killed in Colorado. The Rocky Mountain Climate Organization, The Colorado State Forest Service, the US Forest Service says that all of the mature lodgepole pine forests in the U.S. Rocky Mountains will be dead by 2012 to 2015. These forests represent 18% of all of the forests in the U.S. Rocky Mountains. The forests of Canada are in even worse trouble. This is where the bulk of the tree mortality has come from. In British Columbia alone, 30 million acres of trees are dead. In the next decade, another 10 million trees will be killed at which time all of the food for the mountain pine beetle in BC will be dead. The infestation has rapidly spread beyond BC in the last few years.