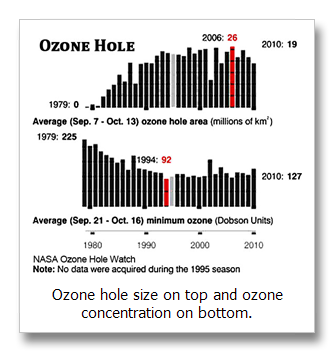 Recent reports of a record low ozone hole are everywhere. I cannot think of a word more appropriate for these reports except “bogus.” Some of the headlines say “lowest in 20 years” and some of the reporting makes this distinction, but do they tell you that before 1979 there was no ozone hole and today the hole is only slightly smaller than it has been for the last twenty years?

Nearly 30 years ago we discovered that ozone concentrations were falling over the South Pole. A few years later we discovered that a gaping hole had opened up over the Antarctic, allowing dangerous UV rays in and threatening to go berserk on us and take over the planet. The culprit was ozone depleting chemicals and we quickly banned them in most countries and developed alternatives. Ozone levels began to recover fairly rapidly, but the ozone hole did not. Why is this?

Climate change causes the stratosphere–that part of our atmosphere above 55,000 or 60,000 feet, to cool not warm. This is because global warming pollutants trap more of the sun’s  heat lower in the atmosphere and there is literally less heat leftover to warm the stratosphere. And the stratosphere is definitely cooling  across the planet and in the Antarctic as most things atmospheric, it’s enhanced. 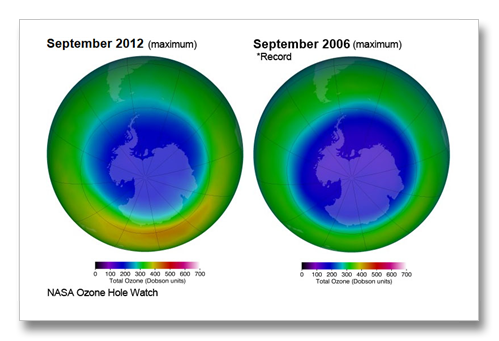 What this means is that the ozone depletion chemistry is enhanced because it speeds up at lower temperatures. Ozone depleting chemicals (choroflourocarbons or CFCs) combine with chlorine clouds in the stratosphere at the poles (yes, we have chlorine clouds on Earth) and ozone disappears. This is what made the hole in the first place. Before 1979, there was  no ozone hole—ever. None. Or at least “ever” as far as us humans are concerned.

So now we still have some ozone depleting chemicals hanging around even though they have diminished a lot since their peak, the stratosphere is colder and the chlorine reaction that eats up ozone is enhanced.

Things are “supposed to get better,” or at least that’s what the atmospheric scientists said when this began in the early 1980s. In 2006 they said that the recovery was would be shifted back by five years because it was slowing beginning more slowly than anticipated.  The hole had not really started to grow smaller yet, but it was not getting worse. That is until the Antarctic spring of 2006, when a new maximum ozone hole record was set. (September in the Northern Hemisphere). Now recovery has been set back another 20 years and we can expect the hole to be under control by then, unless of course climate change keeps cooling the stratosphere.

The bottom line is that recent reporting of a minimum record ozone hole is bogus. Looking at the ozone hole records we can see that at the peak of the decline, an aberrant year created an ozone hole exactly the size of the one we saw last year. If we look at the trend, the hole may be getting smaller by a little bit, but this is by no means cause for celebration.

Global warming/stratospheric cooling is just getting underway as climate change impacts ramp up and we have yet to begin to control our greenhouse gas emissions. We have an even greater opportunity today of a runaway ozone hole than ever before. 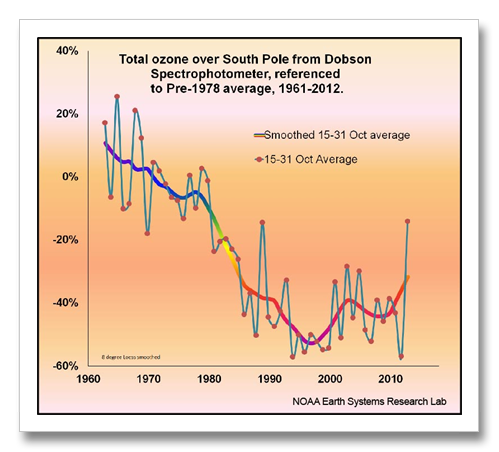 Another sign that the the ozone depletion threat is real: In the winter of 2011/2012 the Arctic saw its second ozone hole ever. The first was some years ago, I can’t recall right now, I reported on it then—maybe it was 2006. the Arctic ozone hole is nowhere near as large as the Antarctic ozone hole but it is there. And it came back. The first time it showed, scientists said it was likely a fluke. But it fluked up again and even a moderate sized Arctic ozone hole would be devastating because so many more people live so much closer to the northern Arctic area than live close to the Antarctic. One last thing that shows that we should not get our hopes up about this new bogus record: 2011 saw a tie for the lowest ozone concentration over the south pole ever recorded. Like Arctic sea ice, the ozone hole is a product of many different atmospheric weather influences. Look at the long term trends to make important plans, and don’t listen to the media when they say something that sounds too good to be true.

And btw, ozone is a greenhouse gas. Less ozone because of a larger ozone hole means less greenhouse gas cooling. The ozone hole does not cause or enhance global warming—it’s just the opposite. The myths out there are numerous and large.