Global Rainfall Increases, But Masked and Weakened by Air Pollution

Globally, rainfall intensity, or the amount of rain in the average rainfall event has already been shown to have increased. But another of the rainfall related projections for a warming world—total rainfall—has not yet seen a similar increase. This can be justified in some places as the length of dry periods is longer and the total number of rainfall events is fewer, or in many other ways.

Because of increased warmth, a longer summer, a longer growing season, drier soils between rainfall events, greater plant use of moisture in the soil because it is warmer, and the fact that some plants are not going dormant in the winter around here any longer (using soil moisture all year long), less rainfall is running off into the lakes. During the last 10 years, inflows into the Highland Lakes have been 10 percent less than they were during the drought of record—even with greater rainfall.

For the first time this new research shows aerosols (smog forming pollutants mostly), have been counteracting the influence of greenhouse gases and limited global rainfall. This work compares the years of big city smog in the northern hemisphere, beginning about 10 years after WWII to today.

Because of rising levels of air pollution during post WWII economic expansion, aerosol pollution increased markedly. This has already been tied directly too the global air temperature trend flattening during this period and how global temperatures began to rise again in the 1980s once air pollution laws were put into place in developed nations. Now this effect is visible with the global precipitation record. 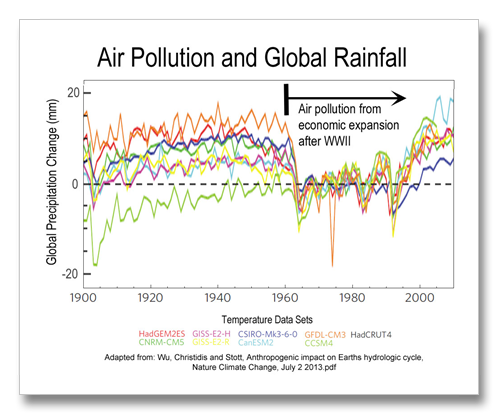 Implications for China are quite significant here.

The research only looked at Northern Hemisphere precipitation because of a lack of reliable observations in the Southern Hemisphere. But the authors did mention other similarities in land precipitation globally with the rainfall datasets implying that these processes are likely global in extent.

Key quotes from these findings:

“Using
improved climate models we show for the first time that
anthropogenic aerosols have not only slowed down global warming
during the past century23,29, but have also cancelled out the
expected increase in precipitation over Northern Hemisphere
land due to increased GHGs.”

Paper concludes: “Although the net historical trends in Northern Hemisphere land
mean precipitation and global  mean precipitation are insignificant,
our results show that these have actually resulted from the
combined influences of two major anthropogenic factors. The
individual effects of increasing GHG concentrations and decadal
changes in anthropogenic aerosols are substantial. Reductions in air
pollution and aerosol emissions in Europe and North America from
the late 1980s have already seen an acceleration of the hydrological
cycle in the past two decades4,14. If the current effort4,1214 to
control air pollution persists, further intensification in the global
hydrological cycle is expected, presenting additional challenges on
communities attempting to adapt to changing rainfall patterns.”