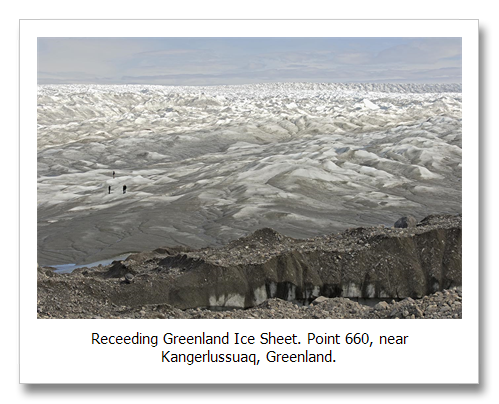 A study in Geophysical Research Letters has found moss beneath a recently melted glacier on Baffin Island that dates back 44,000 to 120,000 years using radiocarbon-14 dating. This technique uses the radioactive decay rate of carbon-14, a rare but predictable version of a normal carbon atom, to date things that were once alive. The radioactive decay starts once a living thing dies and no longer takes up new carbon dioxide to build tissue. By comparing the amount of carbon 14 to normal carbon we can tell how long something has been dead.

Typical to science, this range is caveated heavily and the estimates are almost always underestimated. The lead author (Miller) tells us in the CU Boulder press Release: “The youngest time interval from which summer temperatures in the Arctic were plausibly as warm as today is about 120,000 years ago… We suggest this is the most likely age of these samples.” Miller’s quote from the press release continues: “Although the Arctic has been warming since about 1900, the most significant warming in the Baffin Island region didn’t really start until the 1970s, and it is really in the past 20 years that the warming signal from that region has been just stunning. All of Baffin Island is melting, and we expect all of the ice caps to eventually disappear, even if there is no additional warming.” 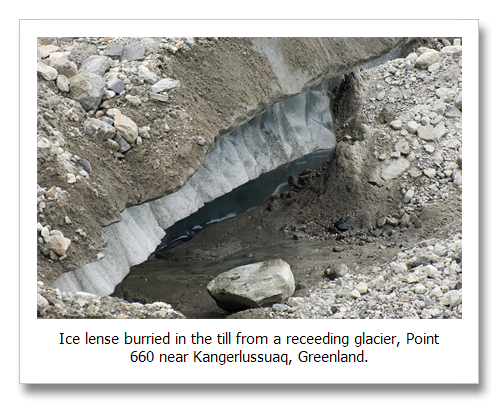 Baffin island is the fifth largest island in the world  after Greenland, New Guinea, Borneo and Madagascar. It is located west of southern Greenland in Ninuvit Canada. The most rapidly melting fringes of northern ice have been receding by as much as a hundred feet in three years since about the turn of the century.  An ice sheet only 1,000 feet thick presses down with a force of 57,000 pounds per square foot or approximately the weight of 16 mid-sized automobiles stacked one-atop the other—on an area the size of 1 foot square kitchen tile.  Ice sheets and glaciers also move, especially close to their edges. They are always expanding or contracting. That anything organic can survive these circumstances has been a surprise to scientists to say the least.

Glacier observations from far northeastern Nunavit, Canada show 52 glacier observations over 50 years where almost universally there has been continued reduction of glacier size below the equilibrium line. The equilibrium line is where snow fall equals melt and evaporation. Below this line, glaciers are losing ice. Above this line, also called the snow line, we are seeing increasing ice. This is something projected in the models that is caused by warmer air holding more water vapor and creating more snow.  But even with more snow at higher elevations, lower elevation melt and evaporation are great enough so that overall, ice is being lost constantly. Over the past half century summer temperature has determined  greater than 90% of glacier retreat at 145 separate  samples from 110 different ice caps that were radiocarbon dated.

The authors tell us that the vast majority of the dates were from the last 5000 years. This was when all but the oldest of these mosses were alive. Since the maximum heating of this current interglacial 5,000 years ago (Global Thermal Maximum), ice caps have been growing again—at least for the first 4,970 years of that 5,000 years.  In this 5,000 year time frame Greenland cooled 2.7 degrees C  (7 degrees F). During this time, the snow-line (where snow never melts all year long) has increased in elevation about 2,700 feet or over half a mile.

The younger dates almost all came from lower elevations. That most of the dates came from the last 5,000 years shows the equilibrium line was much higher about 5,000 years ago and that melt and evaporation had completely consumed parts of or all of the ice located at low elevations.  The older samples from higher elevations then are from remnant ice formed in the depths of the last ice age, even older.

So how do we know that the ice has not receded back at least to the point it is today since the oldest (44,000 to 120,000 years ago) mosses were once alive, and that subsequently ice has covered those dead plants again? The Arctic is an extremely windy place that desiccates organic material rapidly and blows it into oblivion. To find these samples, first these researchers had to locate isolated non-erosive ice caps that did not flow from the accumulation of their own weight on flat level ground. The vegetation beneath these caps was basically preserved intact from the time the ice started to accumulate. the authors tell us that surrounding these shrinking ice caps are wide areas completely devoid of anything except dirt and rocks. What organic material that remained had rapidly disintegrated once exposed and high winds and scouring sand and snow took away the remains.

The oldest samples were from four small ice caps at the highest elevations and ten different moss samples. The dates for these samples of 43,800 to 51,000 years ago included a small amount of contamination from recent organic material blown onto the dead mosses. All the samples were collected within three feet of the edge of the receding ice, but contamination still happened and can be statistically identified. The contamination created younger profiles for these samples so it is likely that the mosses are at least as old as the oldest age in the range (51,000 years).

So how did these researchers reach the 120,000 year conclusion? They realized that the 51,000 year dates were close to the limits of the radiocarbon dating technique of 50,000 to 60,000 years which means the samples were at least as old as that oldest age in the range. Considering that radiocarbon dating at the extreme end of the scale, when almost all of the carbon 14 was depleted and no longer radioactive, means that samples could certainly be older, especially considering contamination. To understand the rest of the story the researchers had to look at other techniques to find the oldest age possible.

To do this they turned to the ice sheet on Greenland and deep ice cores there with very highly accurate prehistoric temperature evidence. When they compared the ice core data to their evaluation of moss ages and the snow line elevations inferred and the temperature assumption from the snow line evaluation, the were able to come up with statistically accurate dating.