The Canadian boreal forest is that northern area of Canada where almost nobody lives. It extends north through some of the wildest lands ever known to the arctic tundra. Under traditional warming scenarios, the boreal forest, and most forests of the world are “fertilized” by extra carbon dioxide and grow faster. This CO2 fertilization effect was supposed to last far into the 21st century or even beyond before warming creates a hostile environment that overwhelms the CO2 fertilization effect and begins to harm forests. The Canadian boreal forest contains 30 percent of the world’s boreal forests and is larger than the remaining Amazon rain forest. 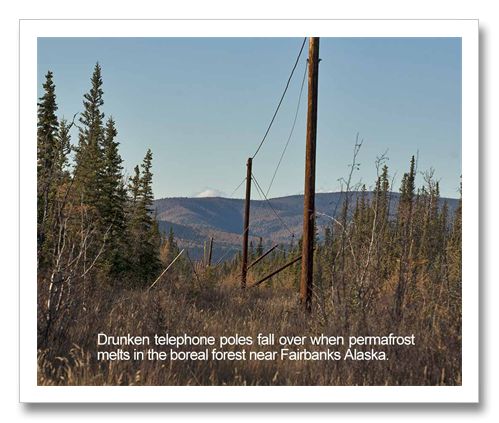 The boreal forest or taiga covers ten percent of Earth’s land area and is 29 percent of Earth’s total forest cover. It contains almost twice the carbon of tropical forests and almost six times the carbon of temperate forests. It surrounds the north pole across Canada, Russia and Scandinavia in an 800 mile wide band of green. It is clearly, relative to climate change, the most important ecosystem on Earth counter to the popular understanding that that the Amazon, or the rain forests are most important. (Not to dis’ tropical forests diversity–we are talking about carbon and climate.)

This study was done by researchers at the University of Quebec, Montreal and published in November 2011. The research looked at 96 long term forest study plots all across Canada. Only undisturbed forest plots were evaluated where no logging or forestry practices had ever been undertaken. The minimum forest age was 80 years. None of the forest plots showed any signs of the unprecedented bark beetle infestations now taking place across Canada nor any other of the dozens of maladies present in Canada’s forests that have been enhanced by a warming climate. The scientists tracked 22,425 living trees; and their data included a total of 74,556 observations.

The mortality rate was ten times greater in the west beginning at 0.25% per year in 1960, and doubling in twenty years (1980), then increasing five times more in the next 30 years (2010). In the east the mortality rate only doubled between 1970 and 2010. Counter intuitively, it was the mid elevation forests that are dying the fastest. Logic (and computer modeling) tells us the highest elevation forests, because they warm more than lower elevations, will experience more stress and thus mortality will increase faster.

Somewhat more predictably however, lower latitude forests are dying faster than higher latitude forests. The reason is likely that those trees further north are already existing on the ragged edge where the Arctic rules. As these climates warm it becomes more habitable, which still does not make much sense because there should then be less mortality; until one recognizes that these forests on the ragged edge exist in a very shallow layer of active soil that thaws for a few months every summer. Beneath is permafrost. With warming the permafrost is melting, but much of the melt is trapped on top of more permafrost. This creates a bog, not a forest and the trees stress and die, even as the temperature becomes more hospitable. So mortality, while increasing, is less than further south, confirming the logic.

So now this is happening generations or even a century ahead of schedule. The same thing is going on in the American West. In a study done by the U.S Geologic Service, the U.S. Forest Service, the Universities of British Columbia, Washington, Arizona, Oregon State, Colorado at Boulder and Penn State, published in the journal Science in January 2009.

These researchers found an average increase in mortality of fourth to five times from “normal” in the 1960s. They looked at 58,736 living trees over the study period, and 11,095 died. Seventy-six plots of old growth forest were studied with the minimum tree age of 200 years from all across the American West.

The researchers ruled out beetle infestation and the other maladies enhancing mortality because of warming. They also ruled out fire, successional dynamics where shade tolerant species dominate,  increasing forest density from fire suppression, and something called the “majestic forest syndrome.” This is where really ancient trees, possibly allowed to become over ancient because of forest fire suppress, fall on younger trees causing their deaths.

Regrettably, recruitment rate is failing as well. Normally when a tree dies in the forest, dozens of new trees pop up to replace it. This is happening in only half of the forest plots studied today. The researchers conclude that warming stresses are responsible. As our climate changes, forests are simply evolving to something different from the way they originally evolved in our old climate.

This pervasive increase in mortality dramatically reduces stored carbon. In twenty years, standing carbon is reduced by 50 percent. In thirty years it is reduced by 80 percent. this bodes poorly for the carbon sequestration ability of our world’s forests in the short-term.