Temperature Changes: It’s Not All About the Average Global Temperature 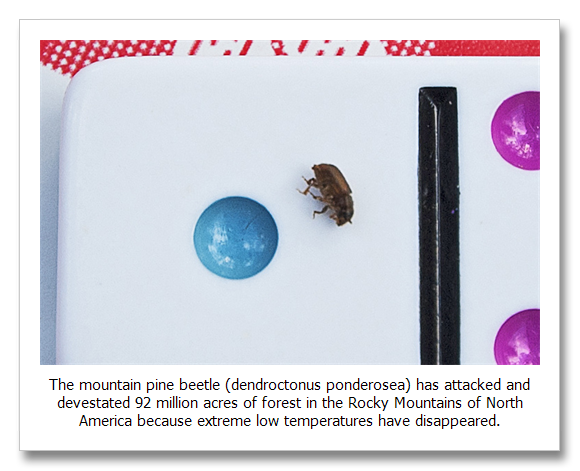 A couple of examples of impacts due to changes in temperature variation are bird migration and insect prosperity. It’s the extremes that drive life. If it never get’s colder say, in any one area, than the average nighttime temperature, why would birds migrate? Their food sources would not die or lose their leaves.

The University of Wyoming press release tells us: “For example, the variability in temperature could potentially mean bugs survive for longer periods in nontropical regions. The result could be increased crop damage (from pest insects) or spread of diseases, such as malaria carried by mosquitoes.”

As nighttime temperatures warm more than daytime highs, this is beginning to happen. But there are other impacts dealing with insects that are happening right now that are very profound.

In the Rocky Mountains of North America, 92 million acres of forest have been attacked and largely destroyed by a native pine beetle gone berserk because of warming nighttime temperatures. The mountain pine beetle (dendroctunus ponderosae) is only killed by extreme cold of –20 degrees C for literally weeks in a row during the early and late winter season and –40 degrees C during midwinter. These extreme low temperatures have virtually disappeared in the Rockies and the beetle has responded accordingly.

Because of a flattening of the daily and annual temperature variation in the Rockies, the mountain pine beetle has flourished and as a result the forest devastation has been at least ten times greater than any other recorded pine beetle attack.

(See our film “What Have We Done” about the mountain pine beetle attack in North America here.)

This work evaluated over 1.4 billion hourly temperature measurements from 7,906 weather stations from 1975 to 2013. They found that the difference between summer and winter temperatures
decreased, and the difference between day
and night temperatures increased. More importantly, they found these trends are largest closer to the poles, and by interpretation, at higher altitudes because climate at higher altitudes directly translates to climate at higher latitudes.

This polar amplification of temperatures controls the world of the pine beetle among other things. When high latitude and high altitude temperature differences between night and day temperatures decreases, this means the extremes decrease and the mountain pine beetle survives winter in larger numbers so that it’s attack can be carried out to greater extremes in subsequent seasons.

Another important quote from Wang shows us again that average temperature is not the end-all to climate change: “What we have done is come up with a quantitative assay of how seasonal a place is when it comes to temperature… We find that the seasonality of the Earth is changing. This has continued, and even accelerated, even when increases in mean temperatures have paused in recent years.”