The Arctic is warming more than twice as fast as the global average, Arctic sea ice and Northern Hemisphere snow cover are decreasing faster than the models project, more frequent extreme weather events are occurring and more frequent severe winters are occurring too. Three potential drivers  of these events are: changes in storm tracks, the jet stream, and planetary waves and their associated energy propagation.

All three are emblematic of Arctic Amplification, where the temperature difference between high latitudes and mid latitudes decreases from what it has been in the past because of global warming. 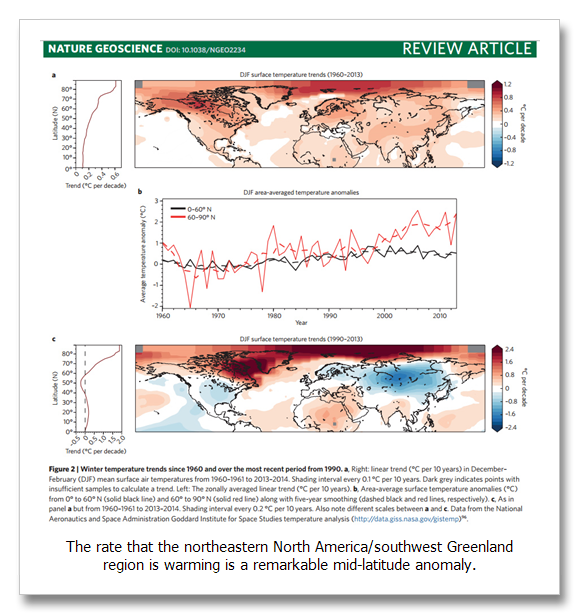 The intro to the paper states: “September sea ice has declined at a rate of 12.4% per decade since 1979, so that by summer 2012, nearly half of the areal coverage had disappeared. This decrease in ice extent has been accompanied by an approximately 1.8 m (40%) decrease in mean winter ice thickness since 1980  and a 75–80% loss in volume. Though sea-ice loss has received most of the research and media attention, snow cover in spring and summer has decreased at an even greater rate than sea ice. June snow cover alone has decreased at nearly double the rate of September sea ice.”

Arctic Ocean temperatures in areas where sea ice is declining have increased 7 to 9 degrees F. The paper continues: “

The increased fraction of
open water in winter generates warmer, moister air masses over the
Arctic Ocean and nearby continents weakening the
near-surface temperature gradient. Therefore, these feedbacks indicate
that observed Arctic sea-ice loss acts as both a response to and
a driver of Arctic Amplification.

The last paragraph of the introduction illustrates another concept that may play a significant role in the future: “snow cover and sea-ice trends diverge in the autumn and winter with sea ice decreasing in all months while snow cover has exhibited a neutral to positive trend in autumn and winter.” (even though the melt season comes earlier in the spring and stays longer in the fall). 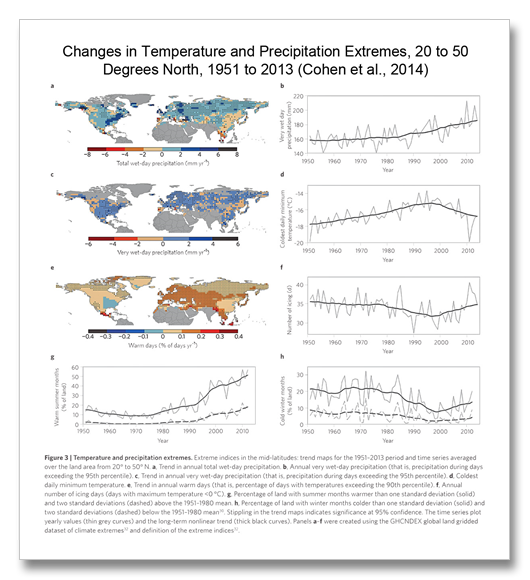 As can be seen from Figure 2 in Nature Geoscience showing surface temperature trends, general warming in the early days has been replaced by massive warming in northeastern North American and Greenland and across northern Russia and the half of the Artic Ocean that lies north or Russia and Greenland.

The graphic labeled Figure 2 shows changes in precipitation and temperature extremes for the region of the globe between 20 and 50 degrees north. This is an amazing compilation of stats. Don’t forget that you can click on the image to enlarge it.

Three Arctic Amplification mechanisms that influence life in the northern hemisphere are discussed in this paper: Storm tracks, the jet stream and planetary waves.

Storm tracks are being impacted by what is referred to as “ the warm Arctic–cold continents’ pattern.” While the Northeastern US, is suffering from years of repeated blizzasters and snowtastrophes, the Artic is basking in relative warmth.

The decrease in the temperature variation from north to south has increased the size of jet stream loops. In the winter pattern, these loops tap Arctic air (which is still radically cold compared to mid latitudes) and pushes this frigidness south.

At the same time, planetary waves slow and or stall out. These planetary waves are basically the backbone of the jet stream. When they slow or stall, weather patterns associated with the jet stream do the same.  Blizzatrophes are just one example. Hurricane Sandy made it’s unprecedented left turn into New York City and the Jersey Shore because of a very large and persistent high pressure system over Greenland that has been increasing in size and persistence in recent summer seasons.

Storm Tracks: Over the past two decades, weather patterns or storm tracks have favored the warm arctic, cold continents pattern (negative NAO/AO: NAO-North Atlantic Oscillation, AO-Arctic Oscillation). In other words, Some places just can’t get a rest. They are continually pounded by extreme winter storm after winter storm like in the US Northeast. The authors tell us that climate models that are forced with regional variations in atmospheric heating similar to observed with decreased snow and ice in polar regions “it is plausible that variability in sea ice and/or snow cover can influence the phase and amplitude of the NAO/AO, and consequently the storm tracks. The connection between negative NOA and AO is so strong in Eurasia that it has been proposed as a”skillful predictor” of the types of cold winters we have been seeing lately.

One of the proposed methods whereby snowfall is increased is simply that warmer arctic air, while still far below freezing, can hold more moisture than colder air. Storm then come rom the arctic primed with more snow. Loss of sea ice in the autumn obviously compounds this increase in moisture.

Jet Stream: A difference in temperature between mid and polar-latitudes defines the strength of the jet stream. A reduced temperature difference seems to be favoring a “weaker zonal jet with larger meanders.” This weaker  flow may cause weather systems to move eastward more slowly (stall out). In addition, the jet stream becomes thicker  farther north. This increases the amount of energy (weather) that the jet stream can conduct from polar regions southward.

Planetary Waves: It doesn’t get any geekier than this: “Extensive snow cover may lead to larger planetary waves that increase the vertical propagation of wave energy into the stratosphere, favouring a warmer and weakened stratospheric polar vortex.” Planetary waves, or Rossby Waves: think of one giant lop of the jet stream, rom polar latitudes to mid-latitudes as being one planetary wave. It is created fundamentally by gravity, Earths rotation and the influence of these on our atmosphere.

The effect on Rossby waves is similar to that on the jet itself. a smaller temperature gradient weakens the waves and caused them to slow, allowing weather patterns to persists and really get under some people’s skin.

More work needs to be done however. What we are seeing is real, and a lot of work has been on this subject and more than a majority of this work points towards Arctic Amplification as being the culprit, or maybe it’s an accomplice. We really can’t quite yet say with exactness whether Arctic Amplification is a response to global warming or a response to increasing extremes in the mid latitude because of warming, which may in themselves be forced by something else, like the increase in temperature gradient between mid latitudes and low latitudes where temperatures near the equator are warming less than the rest of the globe.