This research, funded by the Swiss and U.S. National Science foundations, looked at Greenland Ice Sheet movement in the melt zone that extends inland 50 to 100 miles from the edge of the ice sheet. This is where melt water moves through the crevasses in the ice sheet, then flows down to bedrock and lubricates the flow of the ice sheet to the ocean. 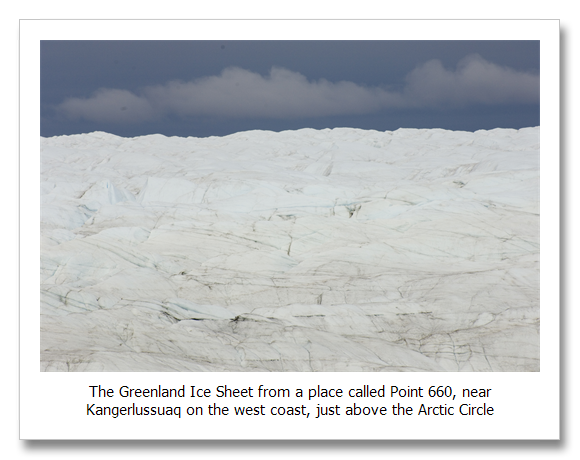 The teams’ work builds on previous ice sheet lubrication research that indicated that the speed of the ice sheet increases and decreases in episodes through both the melt and the non melt season. They did this by evaluating movement at various depths through instrumentation lowered into bore holes.

As the paper’s title illustrates, the ice sheet behaves like a caterpillar, with areas of faster movement extending down gradient depending on melt flow beneath the ice. Previous research has suggested that this movement is caused by pools of melt water that build up and then drain through channels beneath the ice.

Their work confirmed this hypothesis and added that 40 to 70 percent of the motion at the bed of the ice sheet is transferred to the top of the ice (,000 to 5,000 feet above) during  winter and up to 90 percent in summer when melt water drainage is higher.

Their work also demonstrates that water is stored both in and beneath the ice sheet in winter because movement continues after surface melt has ceased.