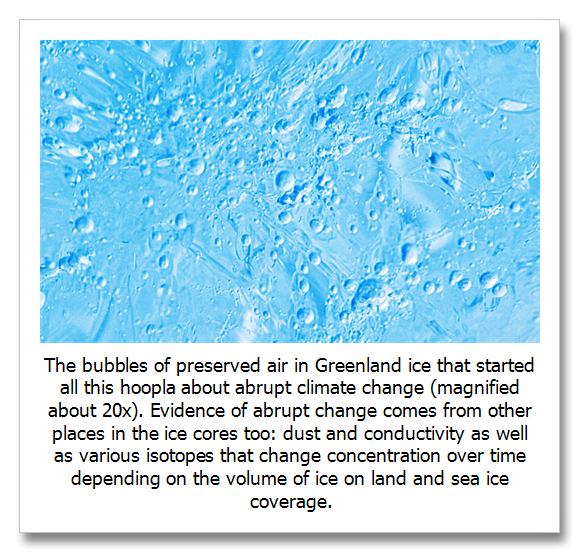 The Gulf Stream may not actually shut down, but it is slowing now and has been for some time (see here) and these researchers have come close—if not having actually solved—the puzzle of why the Gulf Stream slowed or shut down in the past and what the consequences were.

From Australia and Hawaii, science workers have created a tremendous modeling experiment that replicates evidence of abrupt climate changes across much of the globe between 30,000 and 50,000 years ago. They were caused by  Heinrich events (iceberg armadas) that created Dansgaard-Oeschger cycles (abrupt temperature change).

Heinrich events are described as iceberg armadas. They happen when ice sheets become unstable and produce massive pulses of icebergs as they break apart.

Dansgaard-Oeschger events (DO) are abrupt warming episodes that take place in decades (or less). About 23 DO events took place over the last ice age, or between 10,000 and 110,000 years ago. The biggest warming was 13.4 degrees F over 40 years. The most abrupt was 9 degrees F in two or three years.

The theory of abrupt climate changes has been decades in the making. What has been accepted as a most likely scenario is that iceberg armadas were released from the great North American Ice Sheet (Laurentide Ice Sheet) in the Nova Scotia area and points north into Baffin Bay. These icebergs drifted into the North Atlantic and melted and their fresh water floated on the more dense salt water of the Gulf Stream obstructing its flow north, putting much of Europe in the deep freeze with cooling extending across the Atlantic to northeastern North America.

These cooling conditions persist for centuries and as the ice sheet regained its equilibrium after purging, iceberg calving slowed and the freshwater plug over the North Atlantic grew weak. At some point, a threshold was crossed and the Gulf Stream started flowing again. This is the abrupt warming found in DO events.

Rising sea level during warm periods also likely had an effect that destabilized the floating portion of the ice sheets. Warmer water circulating beneath the ice sheet and melting from below, also created instability. These things eventually led to collapse and the entire process began again.

This hypothesis has now been confirmed by modeling by this new work. The work was confirmed by comparing temperature and rainfall records in hugely divergent areas across the globe and the observed evidence fits the modeling experiment.

This is a great coup for abrupt climate change theory. We have known that abrupt climate changes have existed for a couple of generations now. In the early days of ice cores we didn’t realize that such massive changes were anything but noise, but as the Greenland ice cores continued to come in during the mid 1990s with the same abrupt features it became clear that our planet’s climate was far more violent than previously assumed.

But recreating these dangerously abrupt events was not possible until now. More importantly, we see a slowing of the Gulf Stream happening today. It is being caused by a plug of fresh water that is drifting south from Greenland from ice discharge and melt that has increased 500 percent in the last ten years. At the same time we see an increase in winter storminess in the U.S. Northeast and northern Europe.

Even though parts of Europe and the U.S. northeast have experienced cold like they have not experienced since climate change warming began about 20 years ago, we continue to see increasing global average temperature records set. Climate change is certainly a fickled beast. And now that we have a better handle on abrupt climate change, we know that it is a dangerous beast too.