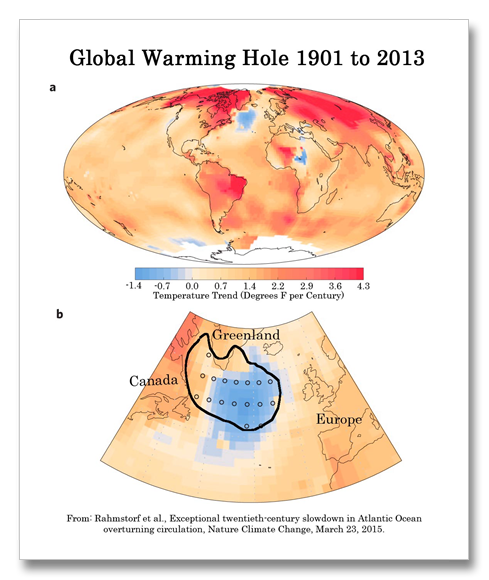 The location of this “hole” in the North Atlantic is in a crucial area where Gulf Stream water sinks. This sinking of warm water buries heat and carbon dioxide in the deep ocean in a massive global current that stretches all the way around the tip of Africa to the Eastern and North Pacific. This current has an influence on our climate that is just as massive as its size would indicate.

The upper image (a) shows the warming trend from 1901 to 2013 in degrees Fahrenheit per century. The authors remind us that the “hole” over Africa is likely caused by poor data. White indicates no data. The lower image (b) is a crop of the warming hole in the North Atlantic. The bold, black circular region with small circles in a grid pattern that encompasses much of the “hole” is the result of modeling overlaid on the 1901 to 2013 temperature trend map. The modeling experiment added fresh water to the North Atlantic and the grid circles indicate cooling from the model with the bold black line being the 4.3-degree Fahrenheit (2-degree Celsius) cooling boundary. Modeling and real world observation match surprisingly well.

The scale of the Gulf Stream is immense. It is the fastest ocean current on earth. It flows from the tropics to the Arctic and represents a segment of the largest ocean current system on the planet (the Thermohaline). At its peak off of Cape Hatteras, the Gulf Stream transports 150 sverdrups, or 21 cubic miles of water per day. (A sverdrup is one million cubic meters of water per day or the approximate volume of all of Earth’s rivers combined.)

The Gulf Stream flows at an average jogger’s speed of about 4.5 miles per hour; throughout its upper several hundred feet. It is about 50 to 60 miles wide and is about 2,000 to 3,000 feet deep. The total flow in the Gulf Stream is greater than all of the world’s rivers combined. All of this warm water from the tropics ends up in the North Atlantic between Newfoundland and Norway.

The “home” in warming is caused by increasing cold melt water from Greenland where ice discharge and melt have increased 500 percent since the turn of the 21st century.  What this all means is that the Gulf Stream is slowing (see here).