What was previously thought to be the threshold or complete melting of the Greenland Ice Sheet was an average global warming of 3.4 to 9.2 degrees F has now been refined to 1.4 to 5.8 degrees F. this is roughly half the warming that we previously understood. 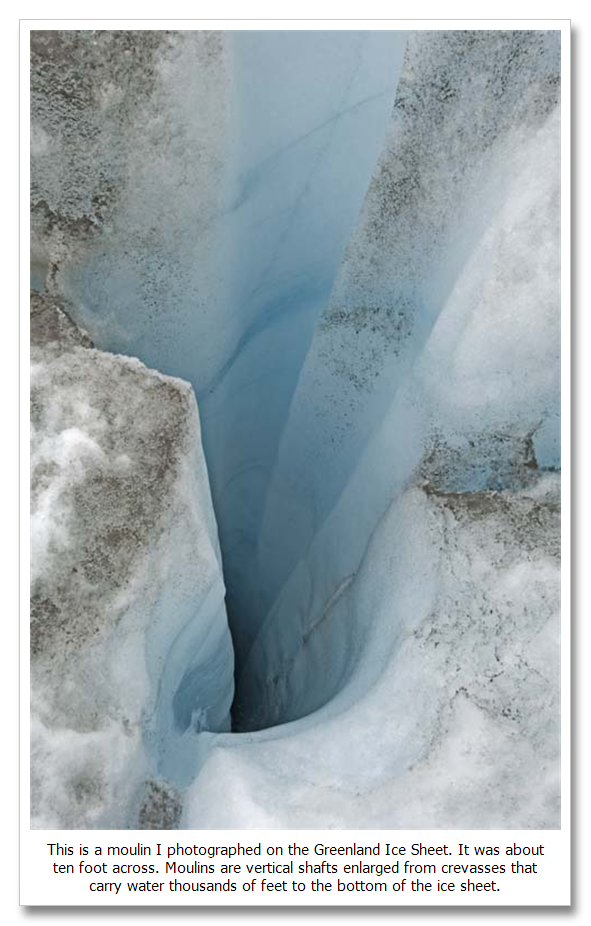 What was previously thought to be the threshold or complete melting of the Greenland Ice Sheet was an average global warming of 3.4 to 9.2 degrees F has now been refined as 1.4 to 5.8 degrees F with a best estimate of 2.9 degrees of warming above preindustrial times. It is extremely important to understand that this 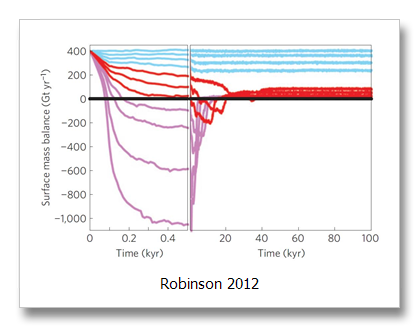 evaluation was done based on the A1B scenario: again–the middle of the road business as usual scenario. We are currently nowhere close to this as our emissions have been on the worst-case scenario track for most of this decade. For temperatures at the higher end of the IPCC 2007 projections, this work is conservative and melt will progress faster. The modeling assumes that Greenland’s average summer temperature will be 50 percent warmer than the global average. But already, the winter of 2010/11 saw most of Greenland experiencing about ten degrees of average warming and winter temperatures warm less than summer temps. This work also does not include dynamical ice sheet disintegration. A process that is aided by rapid melt on the interior of the ice sheet that allows melt water to penetrate to the bottom of the ice through crevasses and lubricate the flow of ice to the sea.

The image (left) shows the various melt scenarios (right click on the image to see it larger). The left side is 500 years, the right 10,000 years. The purple lines are the higher temperature model results. Melt happens much more faster with higher the temperature increases. The solution is also non-linear. That is, it behaves like a population explosion, or maybe a snowball rolling downhill in a cartoon is more appropriate here. Once the melt gets started, it gets really big really fast. The steeper the hill (the faster the temperature increase) the faster the snowball gets bigger (the more melt happens faster).

The The image on the right is one of those moulins, or crevasses where melt water has made its way beneath the surface of the ice sheet. A crack (crevasse) has been enlarged by melt water. Sometimes these things can be bigger than a house. You can see a little melt water pouring in at the bottom of the photo. The day that I took this photo was cold and cloudy at the beginning of winter in late August near Kanerglussuaq, on the Arctic Circle, west coast of Greenland about a mile inland on the ice. So the melt water was not everywhere as it is on a sunny summer day and flow down this moulin was small.

The authors tell us: “Our study shows that a temperature threshold for melting the GIS exists and that this threshold has been overestimated until now. For a sufficiently large temperature anomaly [increase in average temperature], a significant portion of the ice sheet may be lost within several centuries, and the GIS will continue to melt even if temperatures later drop below the threshold value (but stay in the multistable range). Therefore, if anthropogenic CO2 emissions in the coming century drive the temperature considerably above the deglaciation threshold, irreversible total loss of the GIS will be difficult to avoid, ensuring continued substantial sea-level rise for millennia.