The Biggest Misunderstanding about Climate Change (Part 1 of 2)

Part One: Warming over land will be twice the global average because of cool ocean water. 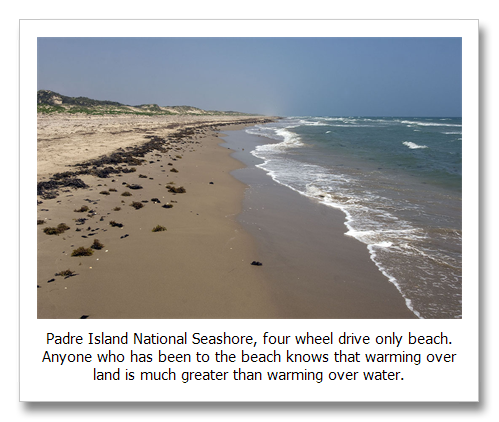 Why didn’t they tell us this to start with for goodness sakes! An average considers warming over land and water. Warming over land is much greater than it is over water. Anyone who has ever been to the beach on a scalding summer day can tell you that. Earth is 70 percent water, and warming over land is more than twice that over water. The popular understanding that Earth will warm 2 to 3 degrees C (3.6 to 5.4 degrees F ) this century is the average warming. What us land–based humans can expect is twice or more what we have come to know global warming will be.

Why is this astounding reality virtually unknown? Why does the projected global average warming carry all the headlines instead of the actual global warming that will impact us? Why is this simple relationship, so profoundly important to us humans who live on land, almost completely absent in the news we hear about global warming?

The answer is complex, but I will try and give you a few clues. Straightforward; it’s about understanding how an “average” works. The message has always included the thought that “warming will be greater over land,” but because of other things, this part of the message gets discounted.

Those other things include “the messages” from both environmental advocates as well as those that would have us believe otherwise. It has to do with the psychology of global warming. The answer is not what we have been told would happen for twenty years. But there is more to the story than just a math problem related to how an average works.

The answer is based on our long-term assumption that we will do what we can to reduce global warming to levels that are not dangerous. For two decades we have been planning on reducing emission. We have been talking about it for so long it is like we have actually done something about it. But because we did not begin to reduce emission like was suggested prudent twenty years ago, we are no longer concerned about the middle of the road scenario (the A1B scenario) that the last twenty years of discussion has been based upon. If one ignores a problem, it usually gets worse, and now it has.

Before I get to the details, two things are important to note and I carry these with me everywhere I go. The good news first: Climate change will be no more difficult to fix than human toilet pollution. The solutions to cleaning up climate pollution, using existing technologies, will cost about one percent of global gross domestic product (GDP) per year for 100 years. The astonishing thing to understand about this 1 percent of global GDP–this massive sounding $540 billion a year–is that it is little different from what we have spent on our efforts to control human toilet pollution and provide safe drinking water across the planet every year for the last 100 years. It is little different from what we spend on the U.S. military every year not counting wars, or what we spend on adverting every year across the planet.

It is little different than the normal economic costs to our nation every year because of normal inclement weather—rain, snow, heat cold, wind, flooding and drought. It is four times less than the average 2001 to 2010 annual health care expenditures in the United States alone. New technologies will significantly reduce or even change these costs into profits.

So if the solution is so simple, why are we in this pickle? The “voices” of vested interests are very powerful. Their money has created the message that allows doubt. This greatly decreases the importance of the message of the vast majority of climate scientists. This statement however, is not as sinister as it sounds. These interests did not do this to purposefully destroy the climate that our society evolved with. They did it because of ignorance, innocence, and the pressures of their respective industry’s economics. They did it because the projected global warming was no more warming than we see every morning before 10 am. They did it because climate scientists did not convey enough emphasis on “only a small amount of change can make a big difference” and “warming will be greater over land.”

Now the bad news. Climate change is much worse than we as a society recognize. Why is it worse, and why can’t we recognize it? American’s views on climate change are 20 years behind those of the vast majority of climate scientists’. Only 60 to 70 percent of climate scientists believed that Earth was warming in 1991, compared to 97 to 98 percent today, but only 60 to 70 percent of the public believes in climate change today. This is one challenge that we face: to convince those unconvinced so that we can work together towards the solutions.

Why do we not understand current climate science and how does this make it worse? We live in a Kyoto world. This is a world that is ruled (in our minds) by the philosophy of the Kyoto Protocol. Kyoto said that if we started reducing emissions slowly, over time our climate would change little. We would keep total warming beneath that critical 2 degrees C threshold that marks the imaginary line between dangerous climate change and not-dangerous climate change.

Climate change is a big deal, but on a whole we think it is not nearly so big a deal as it is. Our expectations are low. It has to do with that thing I mentioned about our everyday temperature changing a couple of degrees every morning before 10 am. But it also has to do with what we hear in the media every day. We as a society have talked incessantly about the reality of climate change; about greenhouse gases, emissions reductions, Cap and Trade and dirty coal. We have dwelled endlessly on one or two little mistakes in the massive Intergovernmental Panel on Climate Change report (IPCC), and the world was riveted by the theft of personal emails and statements taken out of context that resulted in four separate independent international investigations (all of which exonerated the accused btw).

The plain truth however is that we did not do what we were supposed to do 20 years (or more) ago. We have not reduced emissions to 1987 levels by 2012 as was required under Kyoto and in fact, since 1987, across the globe we have emitted nearly as many greenhouse gases (87 percent) as have been emitted from 1987 back to the mid-1700s. Earth’s population has increased 40 percent since 1987 and 1,000 percent since 1750. Before 1750 hardly counts. And just for the record, the United States was among only two other countries in the world: Afghanistan and South Sudan that did not ratify the Kyoto Protocol.

Responsibility for this mess can also be found in the George W. Bush Administration. Three weeks after his inauguration, he reneged on his promise to enact Cap and Trade legislation and avowed to never ratify the Kyoto Protocol. This act gave American’s “permission” to doubt. Bill Clinton is also to blame. He had the opportunity to ratify Kyoto as well, but stayed silent on the issue because of “political pressure” from those vested interests that keep popping up in this discussion.

As a consequence of our collective D & D (denial and delay) and the greatly increased greenhouse gas concentration in our sky since the Kyoto message was created, our climate is changing much faster and with much greater impacts than we have understood it would for the last 20 years.

The delay is important. It’s another one of those “buried messages” from the climate scientists. They have been telling us for twenty years that it takes decades to generations for climate change to catch up with greenhouse gases. This is because of the great cooling capacity of the oceans. But this message was buried. We have been cruising along for twenty years thinking everything was fine, because our climate was not changing. It was if we were actually reducing emissions. (This delay is called the climate lag and I will get to it soon.)

Now: Remember that good news I mentioned at the beginning of this article. It is real, and it is very good news indeed. We need to remember this good news because the bad news, the title of this article, is simply astonishing. What I have to report is not that we can expect to see twice as much warming over land as the average global warming of 2 to 3 degrees C (3.6 to 5.4 degrees F ) from the Kyoto message that have come to understand over the last decade or two. We have long since passed this point. 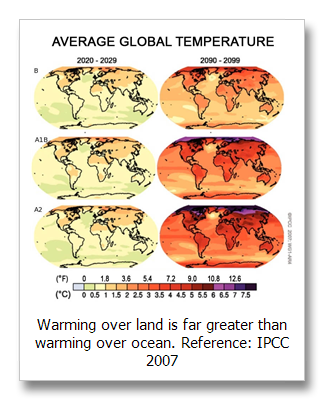 The 2 to 3 degrees C of warming that we have come to know so well was basically what would happen by the end of the century under the A1B scenario. The A1B scenario is one of the 40 IPCC scenarios that were distributed to climate modelers in 1998 for the 2001 IPCC Third Assessment Report. Developed by 50 scientists from 18 countries, the scenarios came in four families and ranged from a perfect world to the worst-case scenario and were based on the next century, 2000 to 2100.

In the middle of the pack somewhere is the A1B Emissions Scenario. The “B” is for “balanced.” The A1B Scenario represents a balance of energy sources including fossil fuels and alternative energy. The scenarios remained the same between the 2001 and 2007 IPCC Reports, but the models changed and a lot of things that go into the models changed. Knowledge for the 2007 report had advanced six years over the 2001 report. Like in cats and dogs, that’s a long time in climate science years.

The results of the models from the 2001 and 2007 reports were quite similar. The difference was in resolution. The 2007 report could see a much smaller areas than the 2001 report. Sub-continental scale areas were now visible.

As can be seen from the image “Average Global Temperature,” the A1B scenario clearly shows that by 2090 to 2099 we will see 3.5 to 4.5 degrees C (5.3 to 8.1 degrees F) of warming over land in the U.S. This is similar to most of the land across the planet, with much less warming over water. This image comes from the 2007 IPCC Report and these model results are what average out to 2.8 degrees C of warming for the A1B scenario. This 2.8 degrees is consider the “most likely” warming in the report, and 2.8 degrees is in the 2 to 3 degrees C range commonly found in the media. The “B” and “A2” scenarios represent one of the better scenarios and one of the worse scenarios.

This is what we can expect based on the ancient (in climate knowledge years) message that most of the public now understands. It comes from the 20th century and it tells us that warming will be twice what we thought it would be, and what most of us still think it will be.

But this is not all of the story. Part two of this article should be up next week. Check back. We were supposed to have reduced our annual emissions to 1988 levels by now under Kyoto. Instead we are emitting 50 percent more than in 1988 and since 1988 we have emitted almost as many greenhouse gases (87 percent) as were emitted from the beginning of time up until 1988.