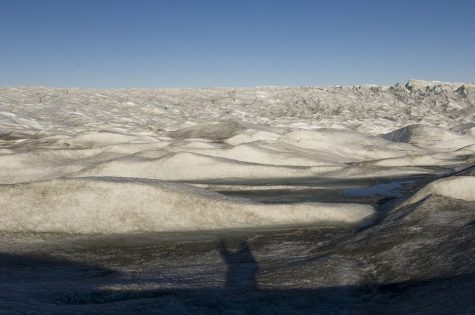 The author waves from a point about a mile onto the ice sheet near what is called Point 660, about 25 miles from Kangerlussuaq, on the west coast of Greenland, 100 miles north of the Arctic Circle. Dust accumulates on the ice from as far away as Siberia. As the ice melts, most of the dust is left behind to absorb more sunlight and melt more ice in a climate change feedback that has already begun. (Photo: Bruce Melton)

Greenland is warmer than it has been in more than 100,000 years and climate disrupting feedback loops have begun. Since 2000, ice loss has increased over  500 percent, and liquid water now exists inside the ice sheet year-round, no longer refreezing during winter.