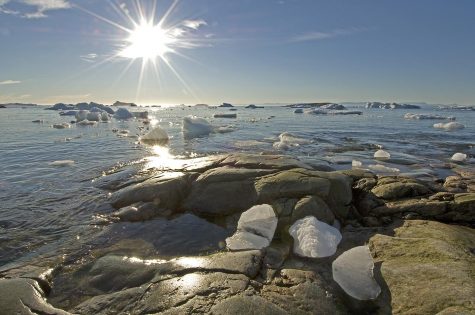 West coast of Greenland. The fastest glacier in the world, Jakobshaven Isbrae, moving at 150 feet per day, dumps ice from the Greenland Ice Sheet into Disko Bay. (Photo: Bruce Melton)

Climate science is way out in front of climate policy. Commitments at the United Nations Climate Conference in Paris pale in comparison to those from the Kyoto Protocol with its beginnings in the Rio Earth Summit in 1992. The cheap and unambiguous solution of removing CO2 directly from the sky has been discredited by the perceived debate. Previously assumed stable ice sheets are disintegrating. It is warmer than any time in the last 120,000 years. The Gulf Stream appears to be shutting down. Nearly 100 submarine glacial valleys beneath the Greenland Ice Sheet tunnel warm subtropical Atlantic water 90 miles beneath the ice. The Intergovernmental Panel on Climate Change (IPCC) says we need to remove more carbon dioxide from our atmosphere than we emit every year (negative emissions). Most importantly, new knowledge about global cooling smog shows that killing coal will create more warming than doing nothing in the most critical decades-long time frames.