Our buddy Tedesco at Cryospheric Processes tells us that The Greenland Melt Index ranked 6th in 2011. The melt index anomaly is the number of days with detectable surface melt compared to the baseline period of 1979-2010, and is estimated from satellite microwave observations. But this “melt index” is something like comparing sea ice extents in the Arctic ocean. It is a tool, but by no means definitive. For one thing, the baseline period interferes with the comparison. If every year, a greater amount of surface area is exposed to melt, and every year the baseline changes to include the increasing melt years, the baseline average increase, thus decreasing the relative value of the Melt Index.

Comparing the Melt Index to sea ice extents measurements does not take the other variable into consideration. For sea ice, wind direction and strength and ocean temperature plays a significant role in how much ice volume actually exists. It’s the ice volume that must be melted, not the ice area. With Greenland ice melt/loss, a simple area ratio only tells us the change in the amount of are subject to melt compared to the average for the period of record. No consideration is given to how hot it was when the melt area was above freezing, what the cloud cover was, if snow was present or only bare ice, or how fast the wind was blowing; all of which have an impact on ice melt and sublimation.

Like the publicly perceived controversy over Arctic sea ice decline, the rest of the story of Greenland ‘s ice shows things a little different than the more simplistic tools. For example, other evaluations of the melt in Greenland this year showed runoff, surface mass balance, albedo and bare ice exposure were approximately equal to last year’s record levels. 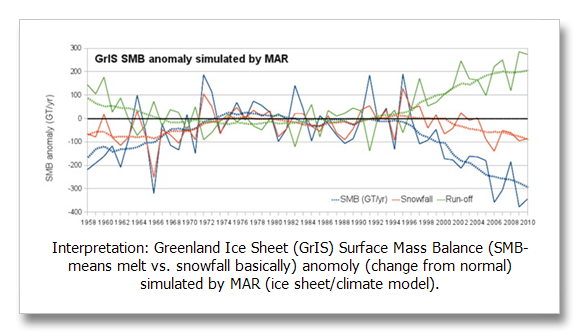