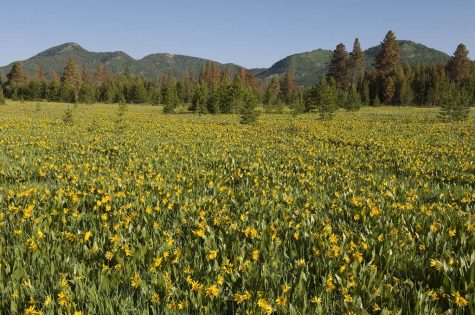 A healthy climate is not always as it seems. Redkill Lodgepole Pine stand behind a field of Douglas’ Sunflower at Steamboat Lake State Park, Colorado. Less than 0.7 degree Celsius of average warming across the globe was responsible for allowing the native mountain pine beetle to kill 20 percent of western US forests between the late 1990s and 2010. The attack continues today with the addition of spruce and fir beetles to the infestation. (Photo: Bruce Melton)

We can have a healthy climate — a climate with zero warming — in our lifetimes. The message for the last 20 years has been that we have to reduce emissions drastically to prevent dangerous climate change of more than 2 degrees C (3.6 F). This strategy would have likely worked when it was first suggested, but we have delayed far too long since then. Now, even stringent emissions reductions allow our warming to at least double and likely triple before finally beginning to cool.