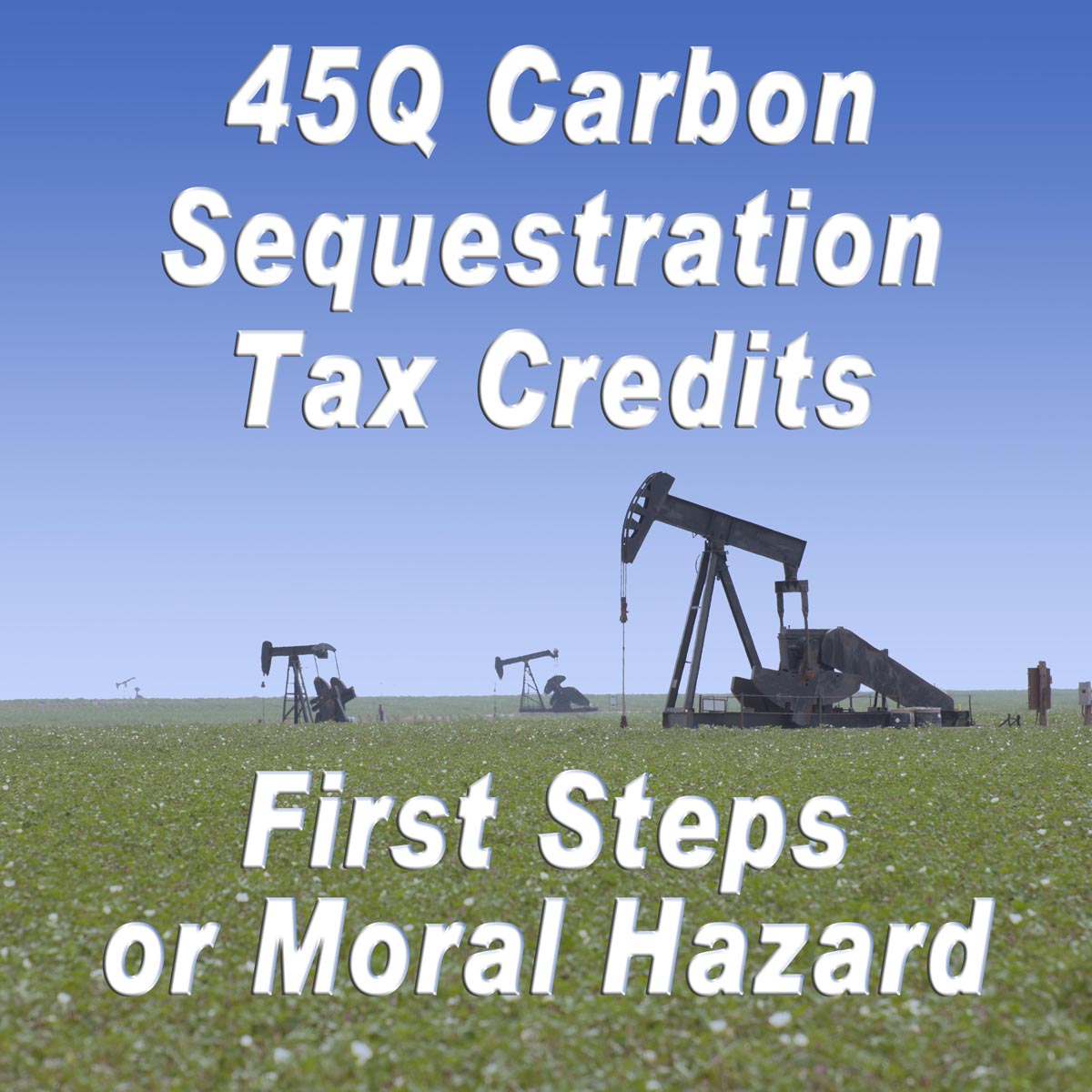 Summary: The new enhancements to Obama’s 45Q carbon dioxide sequestration tax credits are widely seen as a boon to the oil industry. A deeper look reveals they could be the incentive that allows us to actually reverse warming, something that most people understand is a given with emissions reductions. But emissions reductions actually allow triple to quintuple the warming we have already seen—they do not reduce warming for well over a hundred years.

Trump’s new Tax Code has a big anomaly in the revised Section 45Q Tax Credits for Carbon Sequestration. The revised credits are three times bigger than those under the Obama Administration which gives the appearance of being a climate reform strategy, but in reality, the enhanced tax credits have caused outcry of fossil fuel subsidies and license to pollute.

The Section 45Q Carbon Sequestration Tax Credits were originally established by Obama for $10 per ton CO2 when used to recover oil, and $20 per ton for permanent storage underground without oil recovery. Credits were limited to 70 megatons of CO2 sequestration and only allowed for very large point source emissions facilities.

Importantly for the first time, direct air capture of CO2 is allowed and permanent non-oil recovery storage as manufactured products or as stable soil or rock materials is allowed.

So what do these new tax credits mean? Do they give the fossil fuel industrial complex license to keep emitting climate pollution? Much of the popular press reporting, and most environmental groups believe they do. Below is the rest of the story.

Moral Hazard or The Next Step to a Healthy Climate?

The leading criticism of 45Q is that it allows, and even encourages and subsidizes additional consumption of fossil fuels. This is something that cannot be denied and has come to be known as the “moral hazard” of climate reform in academic circles.

Recent reporting by Yale Environment 360 says the environmental organizations that support the tax credit revisions cite that they reduces the net CO2 emissions from oil. This is the “moral hazard.” The credits only reduce emissions, they don’t eliminate them. Yale 360 says that using CO2 to recover more oil results in a 37 percent net reduction of CO2 emission when burning the recovered oil is taken into consideration.

An exhaustive report of the 54 largest oil basins in the world in 2011 from the United Nations Industrial Organization says the net CO2 emissions reductions is more like 60 percent.  Oil recovery with CO2 still increases emissions, but less than even the 37 percent reduction cited by Yale 360.

The “net” emissions reductions aside, there are several other very important things about 45Q that have not been significantly reported in the popular press. I will use Yale 360 as an example, but really, very little of this is in circulation.

Yale leaves out almost all but a brief mention in parentheses about direct air capture of CO2 now being eligible for the tax credit, as well as all discussion about any kind of 45Q tax credits for sequestration that permanently stores CO2 by means other than manufacturing products with CO2 or CO2 derivatives as the feedstock, or by permanent storage as carbonate ion, or as solid mineral limestone or limestone-like material.

The permanent storage of CO2 as a carbonate ion in oceans, or on lad as soil or rock material, is a very important part of this discussion, moral hazard or not. There are technologies in existence that can capture CO2 from the atmosphere quite economically in comparison to other things we do on this planet every day, as well as technologies that can safely store CO2 that are not underground storage. (See Carbon Engineering, Global Thermostat and Blue Planet for just a few examples.) These technologies were actually first put into use to keep our sailors safe from carbon dioxide poisoning in submarines in World War II.

The Importance of Negative Emissions

The most important thing 45Q does, is it incentivizes investors to industrialize and scale existing CO2 air capture technologies to a level that can achieve very large negative emissions and remove excess carbon dioxide pollution already emitted into our sky. The importance of this concept must not be underestimated.

It is also fundamental to any climate reform discussion to understand that direct air capture of CO2 is in addition to limiting emissions from burning fossil fuels and even replacing fossil fuels altogether. Direct air capture alone, while it could solve all our climate problems like a silver bullet technofix if we poured enough money into it, defies the main principles of pollution management. These are:  to limit the amount of pollution being emitted, and to treat the already emitted pollution to an acceptable level.

To reverse warming then, emissions reductions alone are not enough. Since we began attempting to reduce emissions about 30 years ago, we have emitted as much CO2 as we emitted in the previous 200 years. (CAIT)

We have simply delayed too long. We now must employ additional pollution management strategies to reverse warming. The reasons we must reduce warming are also much greater than just the insane extremes we have been experiencing lately (Hurricane Harvey, the California, drought, fires and mudslides, and etc.)

Much more extreme than the climate projections we are all familiar with, and much more extreme than Harvey and the unreal sequence of extremes in California, abrupt changes have now begun. They include things like collapse of the West Antarctic Ice Sheet, shutdown of the Gulf Stream, and the flip of the Amazon from a carbon sink to a carbon source. To prevent these abrupt changes from completing and creating scenarios that would literally make Harvey blush, we must literally “remove the perturbation.” (Feldmann and Levermann 2015) What this perturbation thing means is that we must reverse the warming we have already experienced, not allow warming to continue with emissions reductions alone.

So to keep from dramatically escalating even more extreme climate impacts, and from completing the initiations of these abrupt changes that are far more extreme than what we now see happening, we cannot just reduce emissions. We have to reduce emissions and rapidly move into very large negative emission where we remove already emitted climate pollutants from our sky. Without negative emission we continue to warm, and this warming is not reversed for well over a hundred years even with Paris’ best-case scenario of emissions reductions.

How Do We Achieve Very Large Negative Emissions?

The credit for non-oil recovery sequestration is a lever to assist in financing the industrialization and scaling of existing DAC technologies. It’s a positive financial incentive, just like the financial tax incentive for solar panels, wind energy, and electric vehicles.

Without this incentive, organic advancement of technologies that are capable of very large negative emissions will certainly not be as fast as with the incentives. The solar, wind and EV incentives are proof of this.

There is a vast array of carbon dioxide removal strategies that use the soils, oceans, forests or other aspects of our biosphere to remove carbon from the atmosphere. But these strategies come with major challenges of resource use and land availability. These strategies – combined, at best, cannot meet the limit of dangerous warming of 2 C (that is likely very understated.)

Boyson et al., 2017, in American Geophysical Union’s Earth’s Future, say that carbon dioxide removal measures “are unable to counteract ‘business-as-usual’ emissions without eliminating virtually all natural ecosystems.” Smith et al., 2015, and a team of 39 from some of the most prestigious academic institutions in the world say: “there is no negative emissions technologies (or combination of) currently available that could be implemented to meet the <2 °C target without significant impact on either land, energy, water, nutrient, albedo or cost.”

Of all the negative emissions technologies known, widespread academic publishing agrees that those that remove carbon dioxide directly from air with chemicals, like the technology first used to keep our sailors safe from carbon dioxide poisoning in submarines in World War II, have the least amount of negative side effects.

The final takeaway: The 45Q tax credits are extremely important for industrializing and scaling direct air capture technologies to allow us to move into the very large negative emissions territory that is so badly needed to reverse warming.

Net CO2 Emissions from Enhanced Oil Recovery… What the study says is that, storage of 140 billion tons of CO2 would produce 470 billion barrels of additional oil.  The best sequester to recovery ratio I can find is 2.2 tons of CO2 to recover oil equal to 1 ton of CO2 emissions, or 1:1.4 (sequestered CO2 to additional CO2 emitted.) This is a 60 percent reduction, not a 37 percent reduction as stated by Yale 360.

Sokolov 2016, Paris triples current warming by 2050 and quintuples by 2100… Page 10, Figure 8 shows the increase in temperature given the scenarios studied in this research. The “outlook” scenario is the Paris Acord, COP 21. The increase of the “outlook” scenario is about 2.1 C in 2050 and 3.5 at 2100.
Sokolov et al., Scenarios of Global Change – Integrated Assessment of Climate Impacts, MIT Joint Program on the Science and Policy of Global Change, Report 291, February 2016.
https://globalchange.mit.edu/sites/default/files/MITJPSPGC_Rpt291_1.pdf

Remove the Perturbation: West Antarctic Ice Sheet (WAIS) Collapse Tipping Point Defined… This work out of the German National Science Institute describes marine ice sheet collapse mechanisms, and how there is a very distinct tipping point with the West Antarctic Ice Sheet where collapse becomes irreversible in about 2050. The very important take-away from this work is that to prevent ice sheet collapse the “perturbation” that creates the warming that is responsible for ice sheet collapse, which is mostly ocean warming, must end by at the latest 2050. This means that we must return ocean temperature to its preindustrial stable temperature by 2050. The challenge here is that it is much more difficult to cool the oceans than it is the atmosphere. Figure 3 shows the model runs that define the stable state in blue.
Feldmann and Levermann, Collapse of the West Antarctic Ice Sheet after local destabilization of the Amundsen Basin, PNAS, November 17, 2015.
http://www.pnas.org/content/112/46/14191.full.pdf

CAIT, As much CO2 as in the last 200 years… In just 28 years we emitted as many greenhouse gas pollutants as we emitted in the previous 236 years. Data from the World Resource Institute’s Climate Analysis Indicator Tool (CAIT).
http://www.wri.org/project/cait