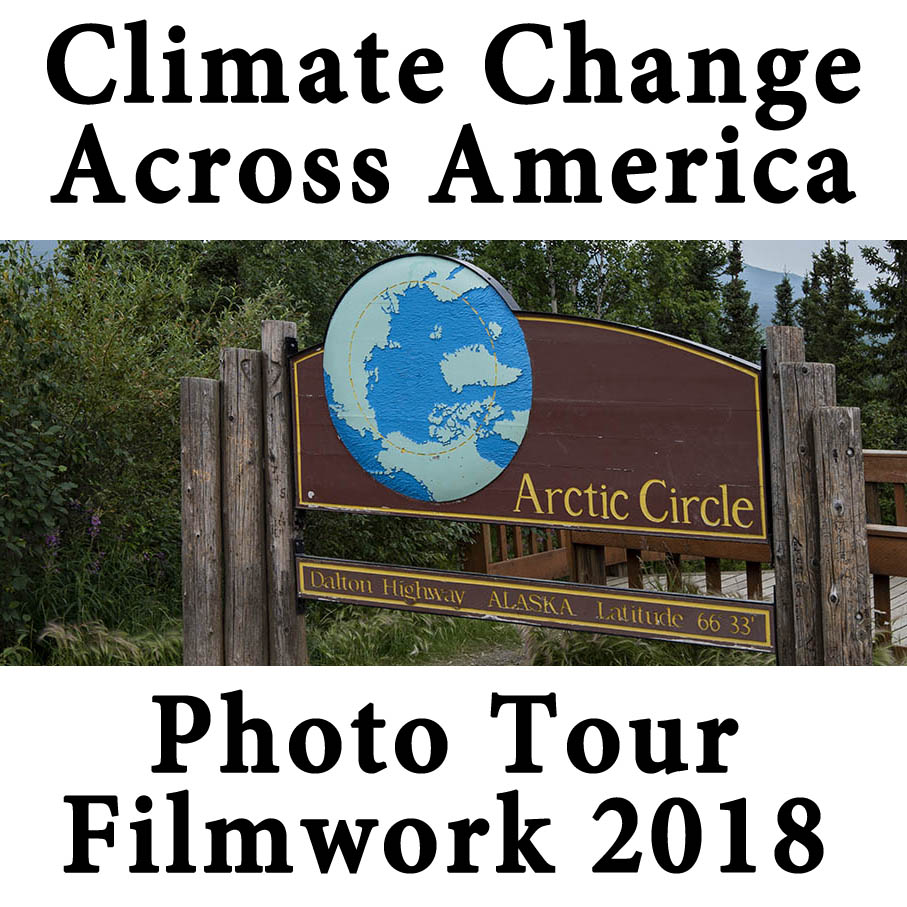 An Epic Film
Four Years in The Making
16,000 Miles From Texas to the Arctic Ocean

Below is a taste of what we were up to in 2018 as an ongoing update to the bigger Climate Change Across America film project. So far we have 43,000 miles of production in the can, with at least two years to go. It’s a big continent, and the impacts are only getting more extreme. The photos below are the teeniest tip of the iceberg. Climate change is far worse than presented in the media because the perceived debate has created a public mentality that broadly believes climate impacts are in a large part natural variations in weather. It’s obvious if one gets out in the wild and one knows what the science says that this is not true. But not everyone has the skills, the equipment, the motivation, the stamina. The story has to be told.

But it comes at a cost. Our nonprofit is an independent science education organization. This a rare thing that has few possibilities for funding. We are almost completely funded by our founder and the more he works on climate the less he can work on engineering to pay for all of this. Our pockets are flat. We have extraordinarily work to do to follow up on our scouting of the California catastrophes last year. And now, we lost our drone.

Our newest piece of filmaking equipment was lost out in front of an extreme thunderstorm about 7 pm on the 10th as we were attempting to get footage of these increasingly extreme storms that have become so common lately. We spent four days on Padre Island three weeks ago filming dune erosion from sunny day tides and there was a gale warning offshore. The drone warned of high winds, they were almost certainly steady at 35 mph (gale force winds are 39 to 54 mph). We flew anyway, the surf was running up against the dunes and eroding badly. (See our beach report and videos here) So, we thought we could handle the winds with this storm. Thinking again…

Everything went well for three or four minutes. At about 350 feet, the view of the wall cloud was phenomenal and it filled the horizon from east to west coming in from the north.

When the gust front hit I was doing one last mega-pan and watching my control screen when my daughter who was watching the show asked urgently, “are you going to be able to get it back?” I looked up and the bird was gone. Looking at daughter, she pointed and the aircraft was moving south fast, obviously straining to stay stationary. Winds were clocked at 78 and 81 miles an hour at ground level with this storm around town.  The aircraft was at 350 feet.

By the time I ran to the corner the bird was out of sight. Autohome landing was not functioning, the wind was too strong. The controls were pushing her north at the max but she was headed south at 25 mph. A minute later it started to rain and control connection was lost. She had traveled nearly a mile. I’ve looked for her twice at the last GPS location and downwind of there a half mile.  The search zone was in the the woods, about 60 percent dense forest. No joy. It’s quite plausible controls disconnected but flying continued, towards the Gulf of Mexico as fast as the tempest could push.

Documenting extremes is expensive. We have spent $17,000 on maintenance on our the Chevy Suburban ice melter in the last four years, that we cannot do without because our work takes us into the four-wheel drive wilderness where many climate impacts are found. We broke her frame on the Dalton Highway somewhere north of the Arctic Circle this year, another $1,000 dollars.

You can donate here, we have very little funding that does not come out of our own pockets. Our photo tour of our big 16,000 mile filming trip to the Arctic is below. A summary of the trip is here, our Instagram video summary is here.

Photo Tour of Our 16,000 Mile Observation From California to the Arctic in 2018 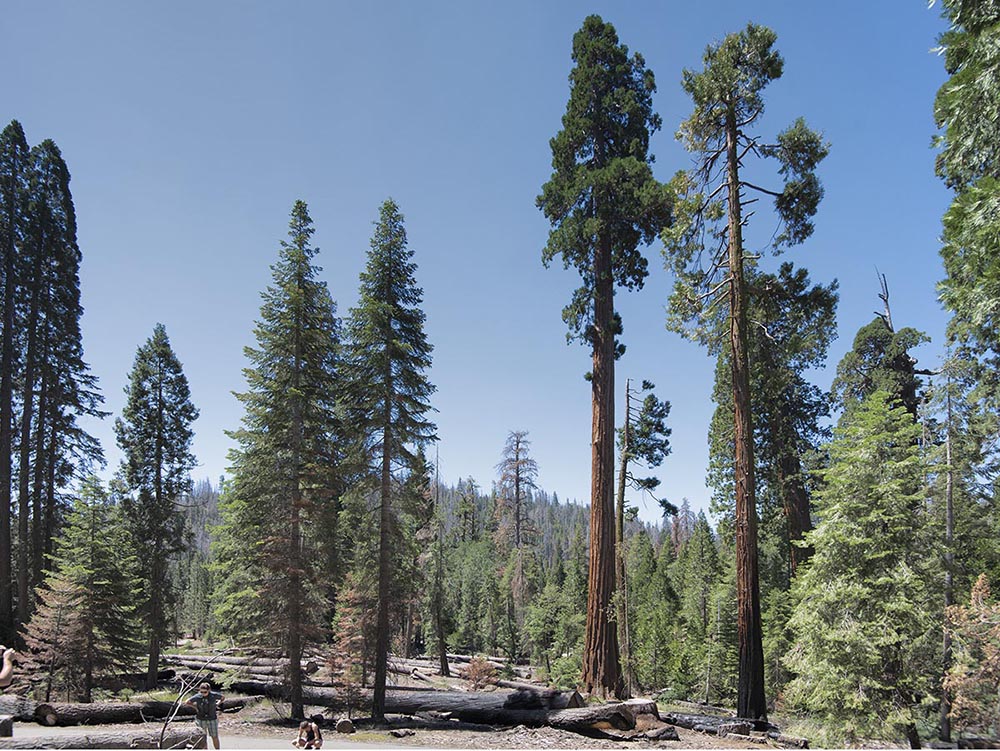 Sequoia National Monument. Red trees have been killed by native bark beetles driven berserk because of warming. Cut trees were felled for tourist safety. Notice the beetle kill sequoia, center background. US National Forests are now dying at a rate that is twice as fast as they are growing. See Our Nations Timberlands Flip: Mortality exceeds Growth by 2:1. 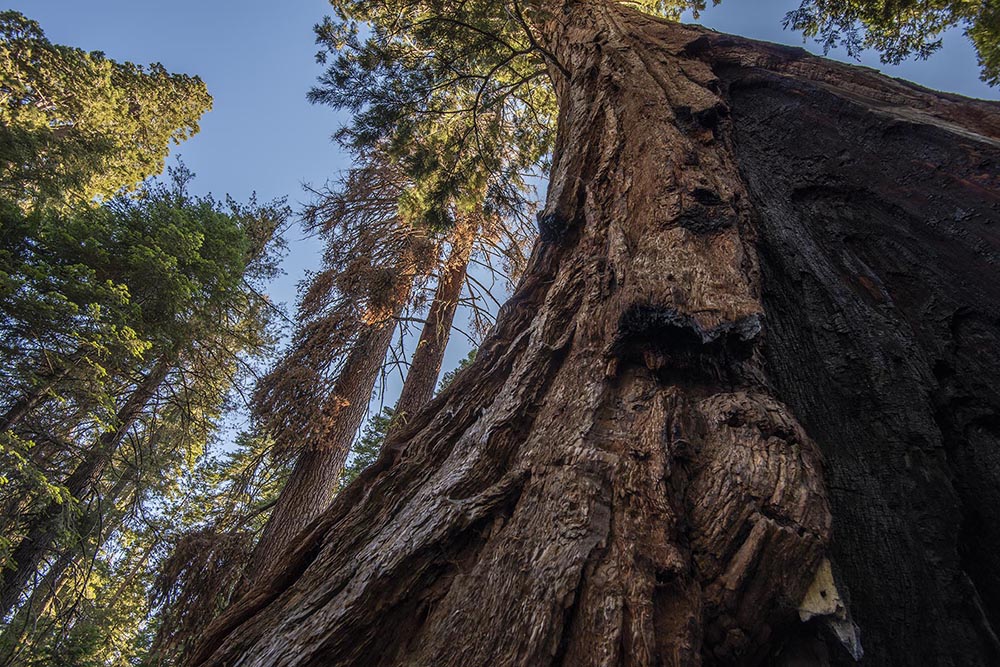 Two redkill (bark beetle killed) giant sugar pines next to a sequoia giant. Ninety-six million acres of forest have been mostly killed by bark beetles since the turn of the century. (See here.) 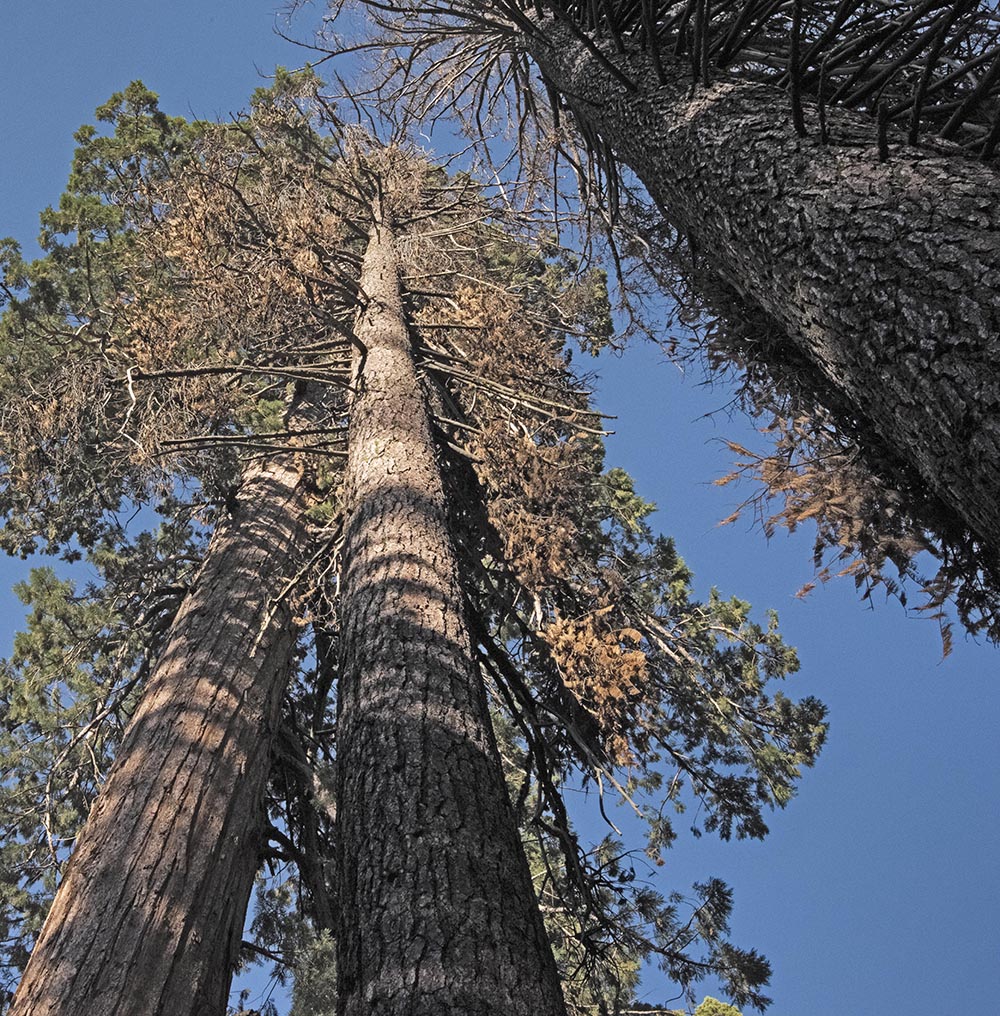 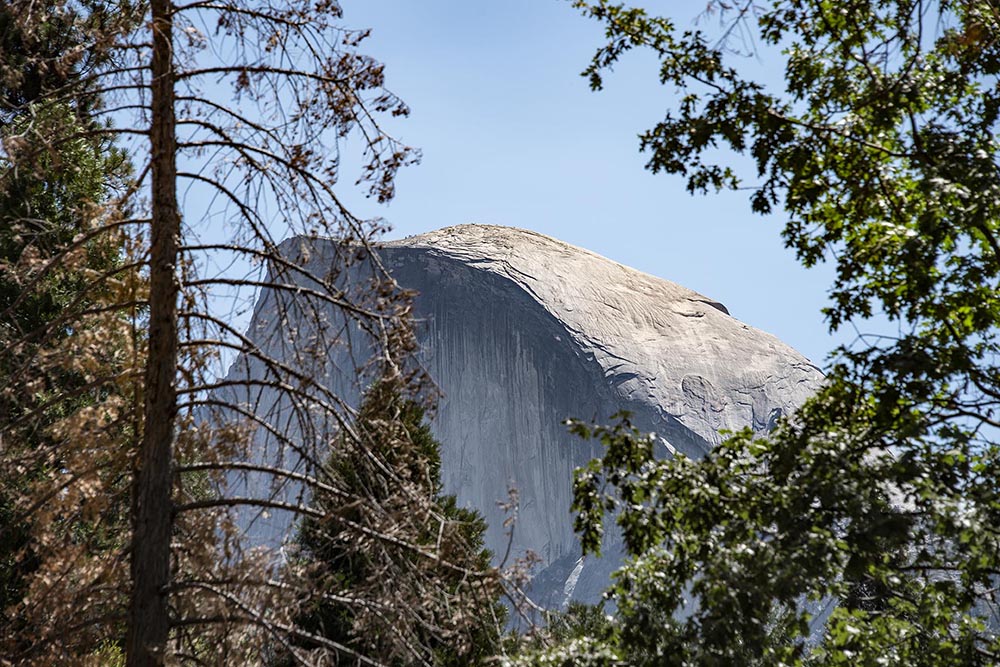 Yosemite National Park, redkill and Half Dome. (See more about the beetle in Yosemite here.) 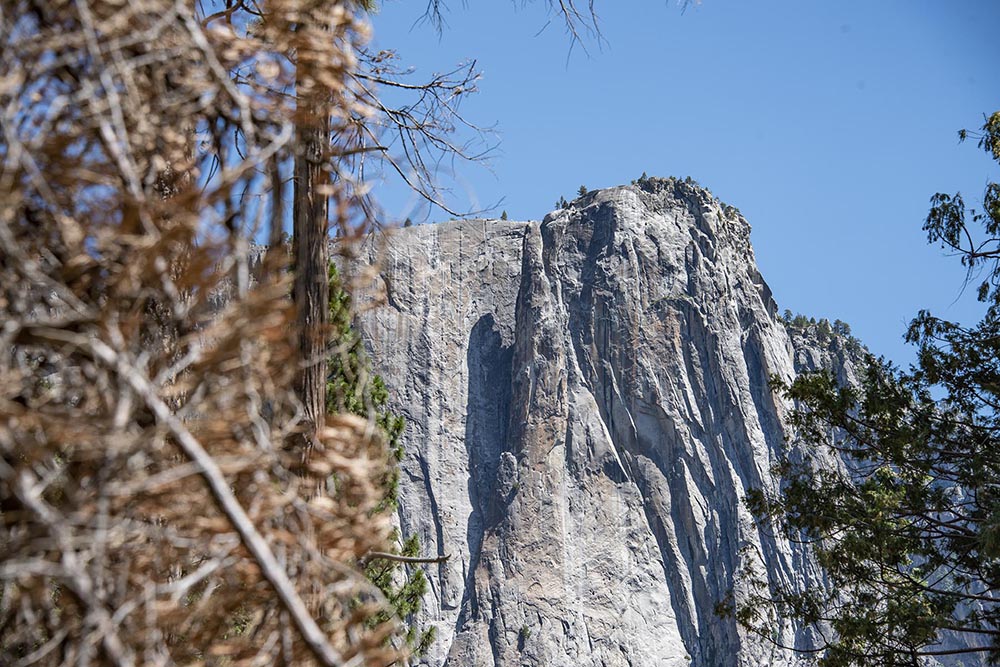 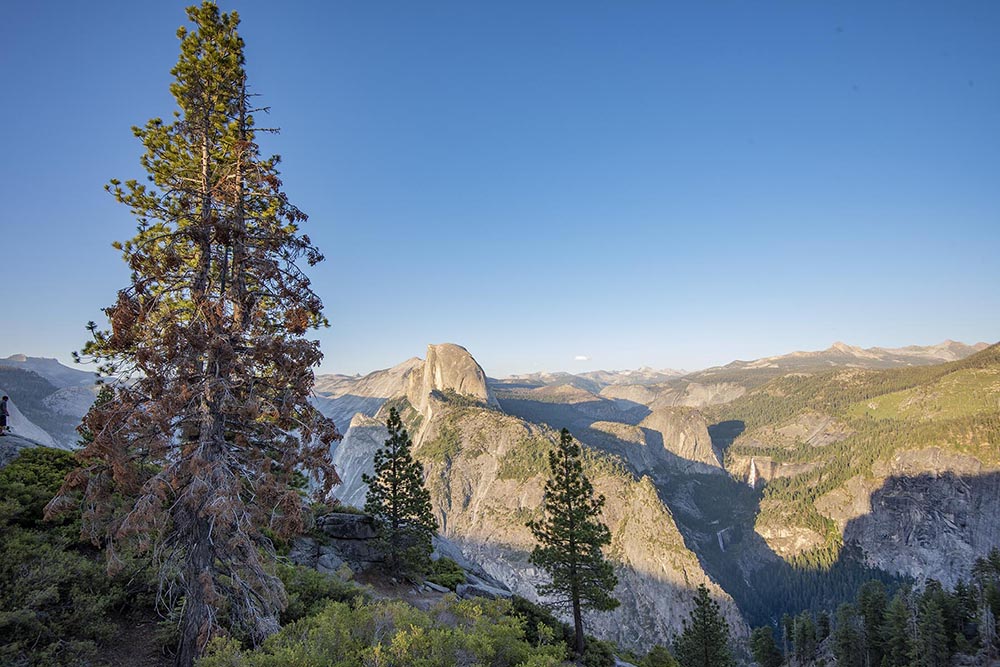 Another shot of Half Dome with a redkill fir, Nevada Falls on the right. 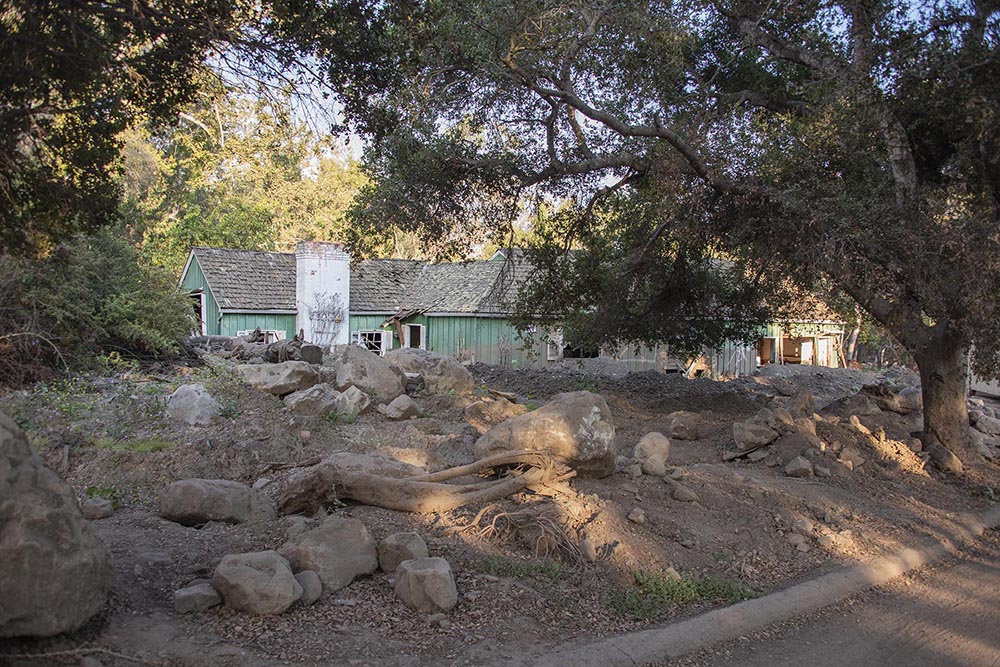 Montecito mudslide, after the the largest fire ever in California in 2017. Twenty-one died. 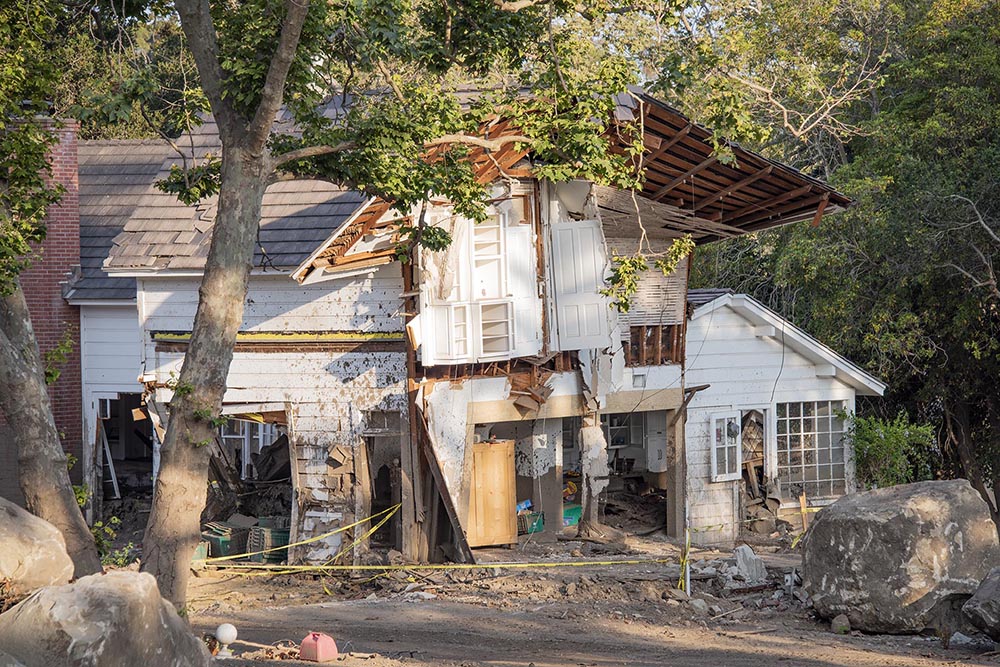 The Thomas Fire that caused the Montecito debris flow was ‎281,893 acres. Its direct cost was $2.2 billion. 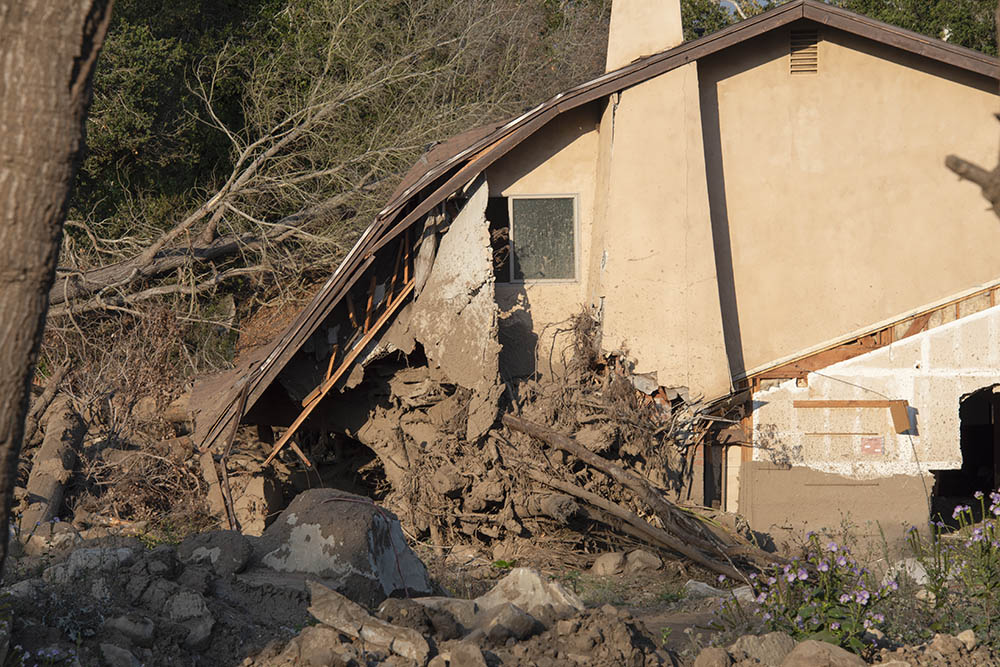 These are some of the 462 homes damaged or destroyed by the debris flow that were not obliterated. Over 1,000 structures were burned in the Thomas Fire. 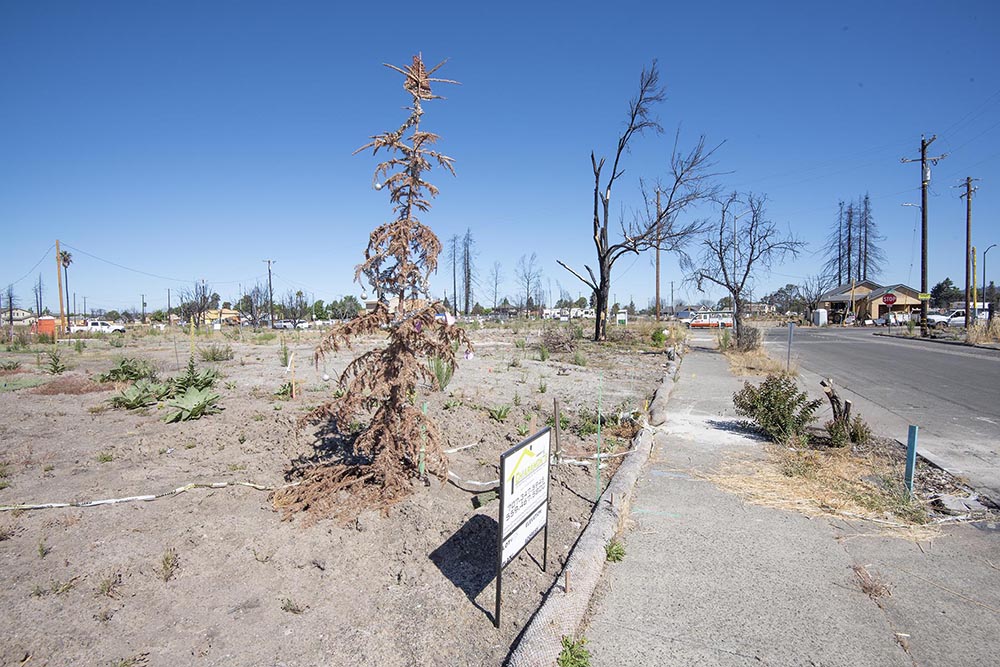 Tubbs Fire 2017, Coffey Park, California, a suburb of Santa Rosa: 5,643 homes burned, the most ever, until the Camp Fire in Paradise in 2018 burned over 19,000 structures. See California Wildfires: Where is the Climate Change Outrage, by Bruce Melton, first published on Truthout, November 17, 2018. 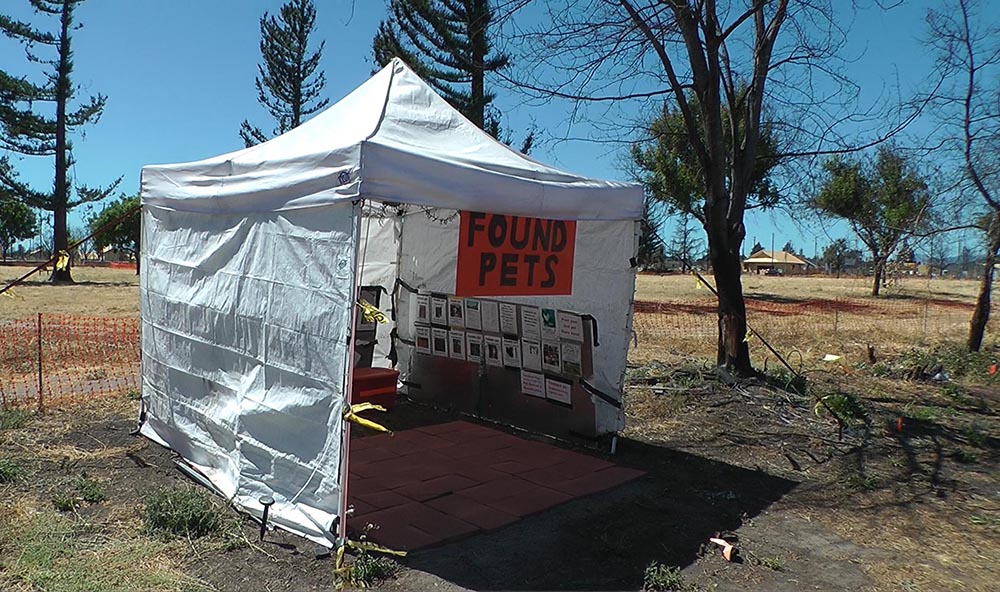 The small blessings that happen with fires of this unprecedented magnitude. 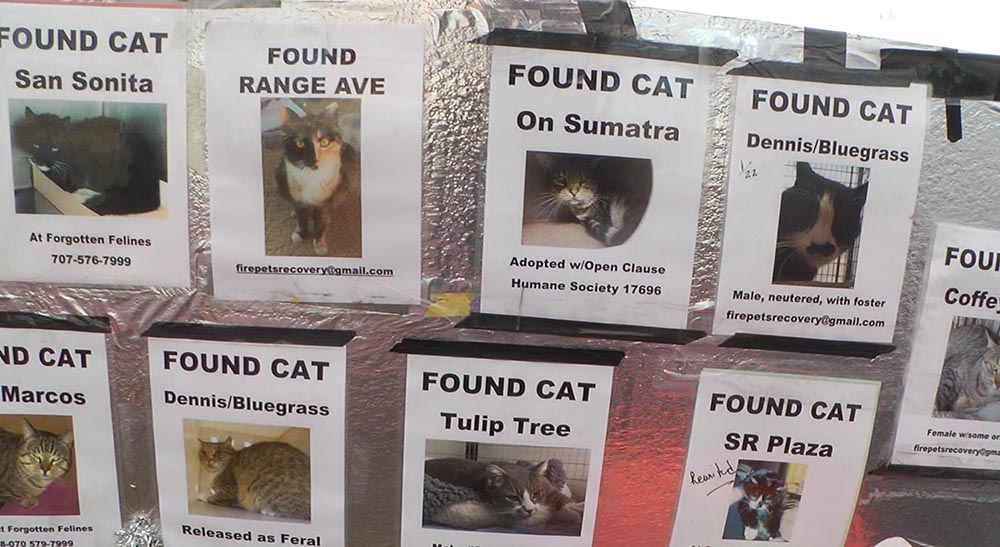 The scope of this event was so massive that we never did find the lost dog tent. 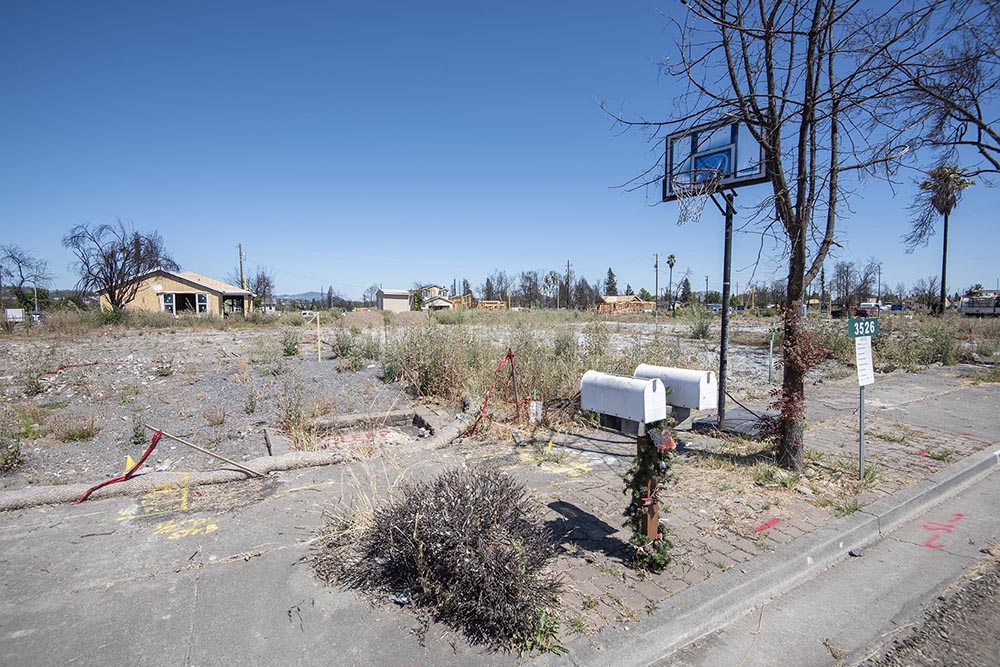 A few homes are being rebuilt in Coffey Park. Not many. 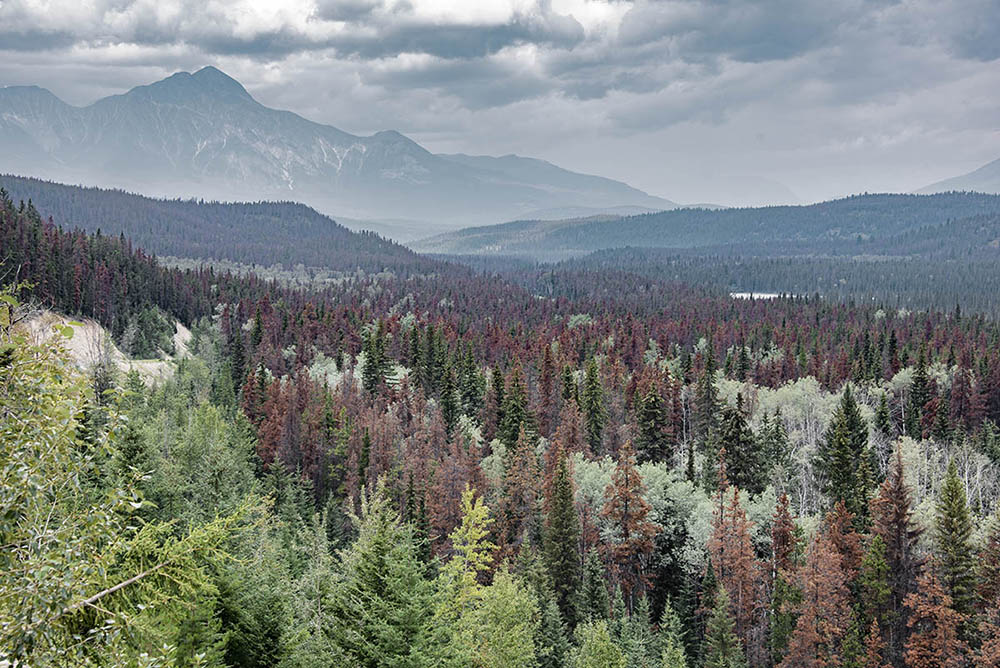 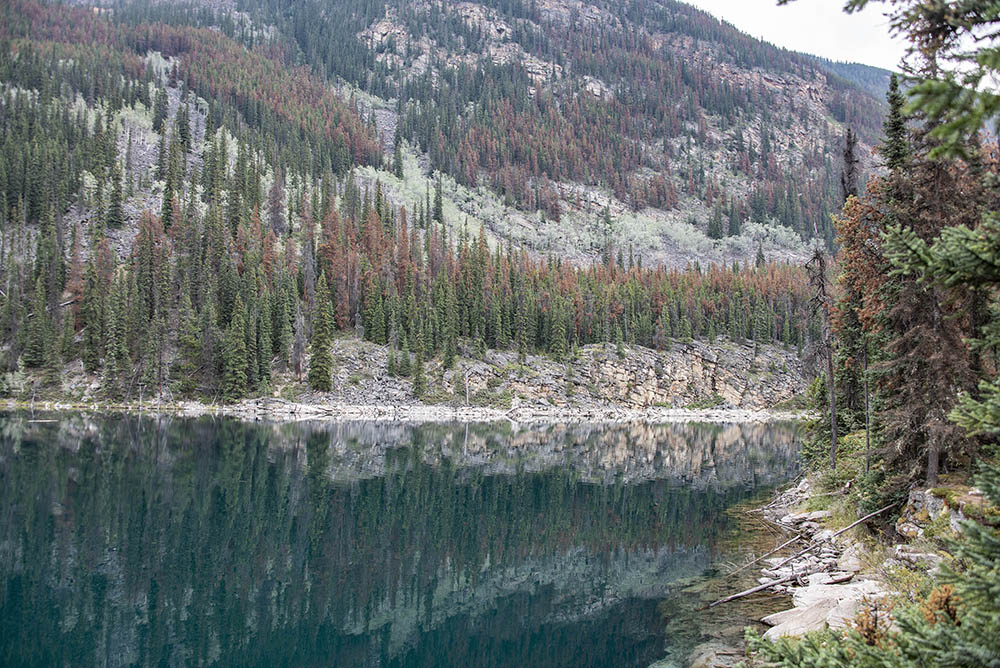 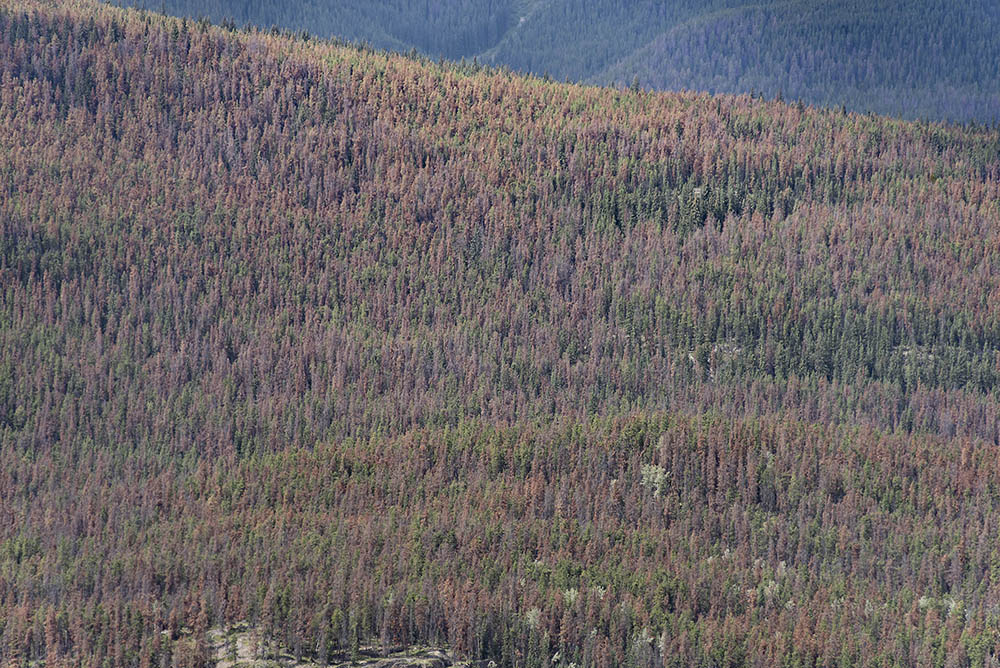 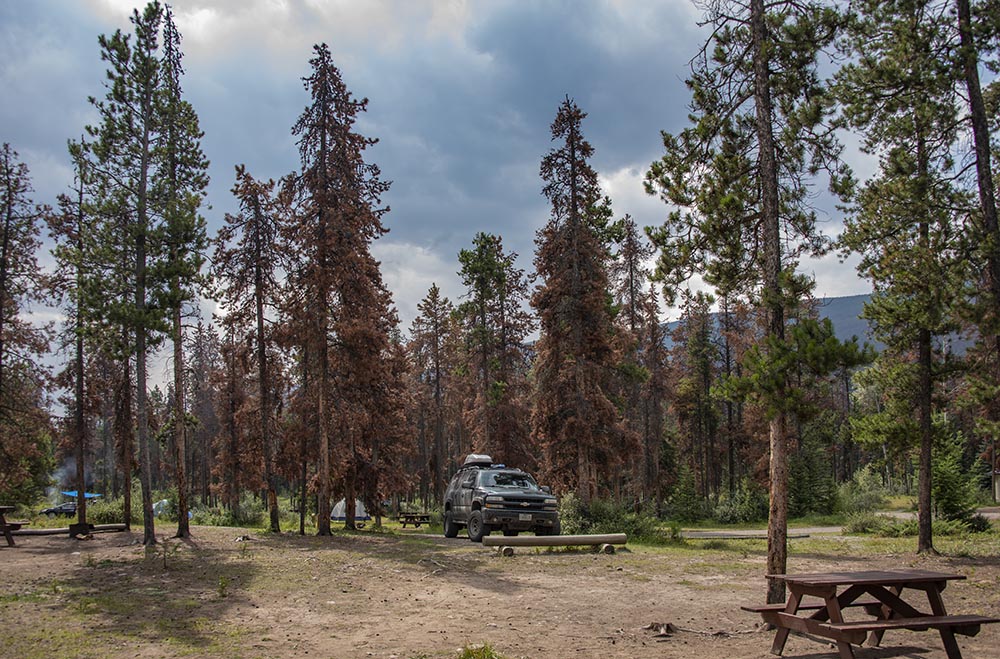 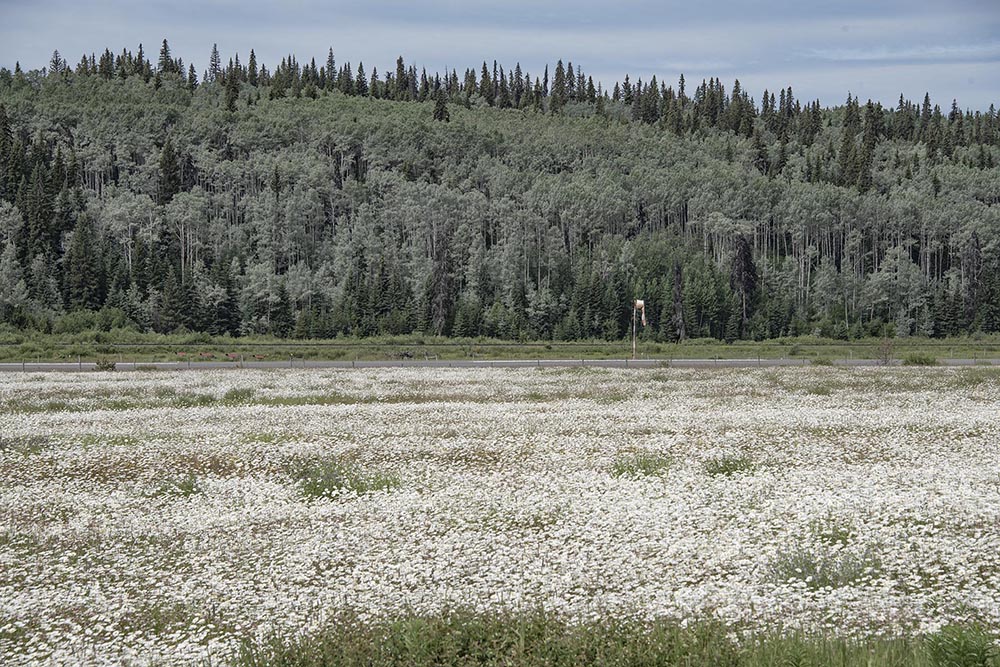 This grove of aspen is being attacked by millions and millions of leaf miners, now ubiquitous across the north from central British Columbia to treeline above the Arctic Circle. These trees should be a beautiful rich forest green.  Leaf miners are small flies whose larvae eat the chlorophyl from leaves and have been observed is impactful populations in the north for well over a decade. (See here.) 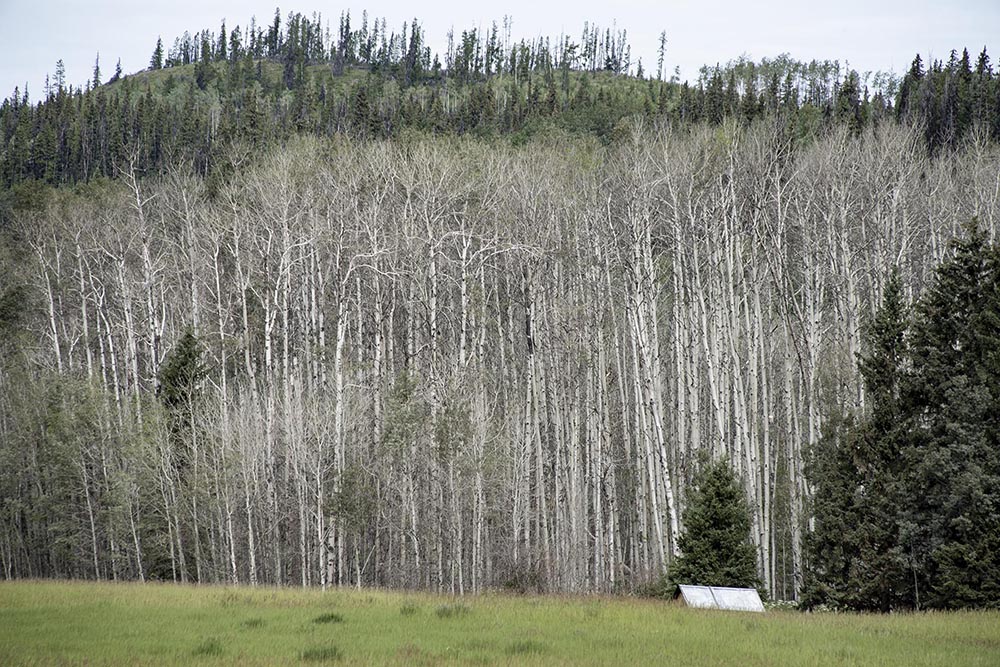 Leaf miner does not kill outright. After several years though, the trees are either so stressed the door is open to other mortality factors, or they simply die of exhaustion. Leaf miner attack now appears to be in pandemic proportions attacking both aspen and willow across the north. (See here.) 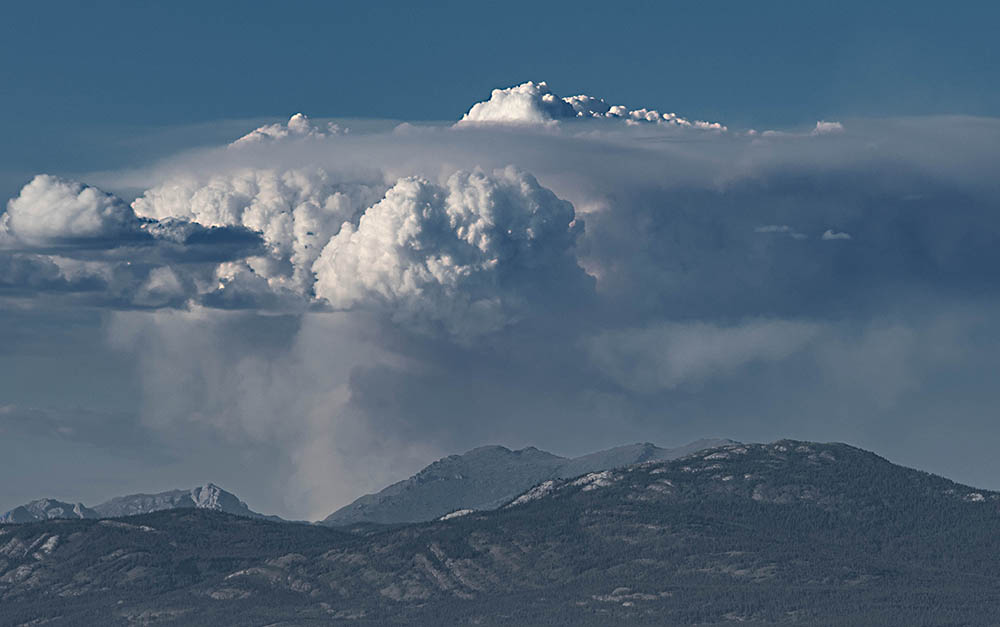 A pyrocumulonimbus above a fire in British Columbia. Once rare, these clouds are fire formed and increasing in frequency. They are so dry they only rain lightning creating a path of firestorms in their wake. The clouds are so powerful they inject ash into the stratosphere like moderately extreme volcanoes. (See NASA and here, and here.) 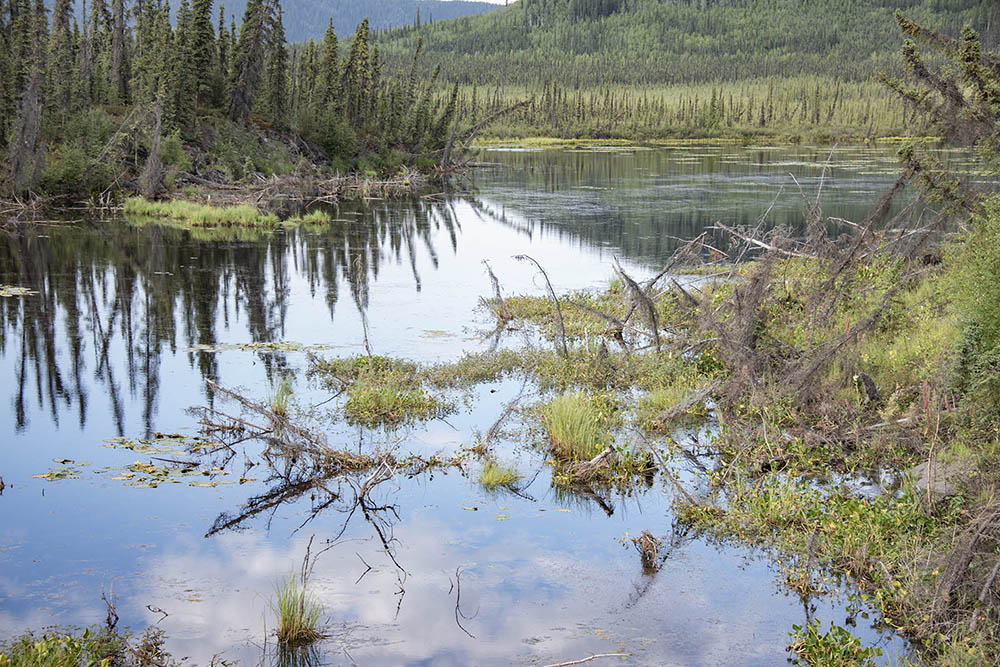 Permafrost melt in southern Yukon. When we filmed the North in 2007, we had to get ice scientists at the University of Fairbanks to tell us where the permafrost melt was. In 2018, permafrost was so common in places it lined the roads. 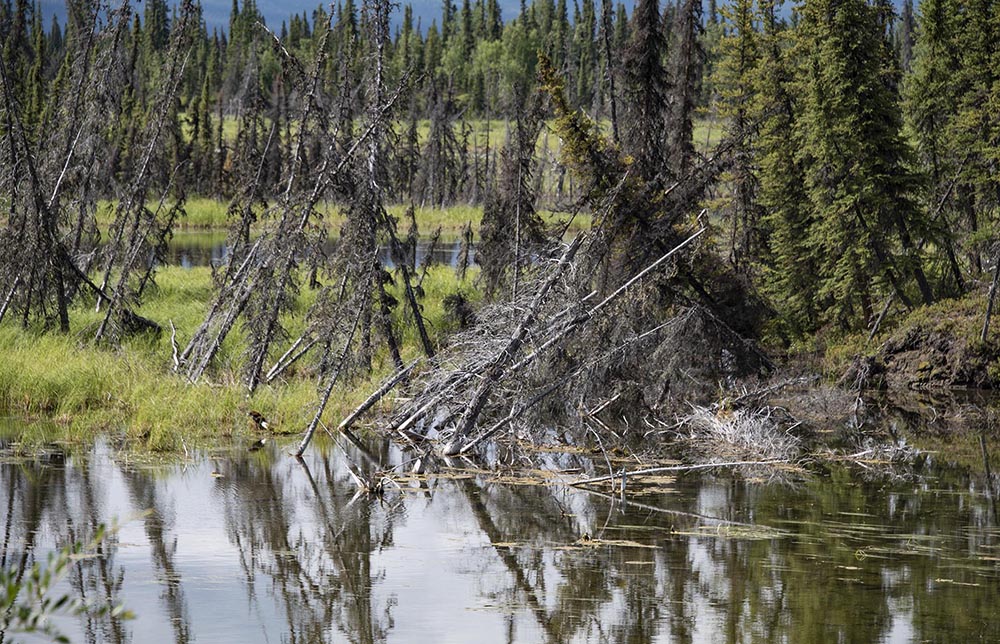 So much permafrost has melted, and there is so much methane in it, Alaska has flipped from a carbon sink to a carbon source, emitting greenhouse gases instead of absorbing them. (See here.) 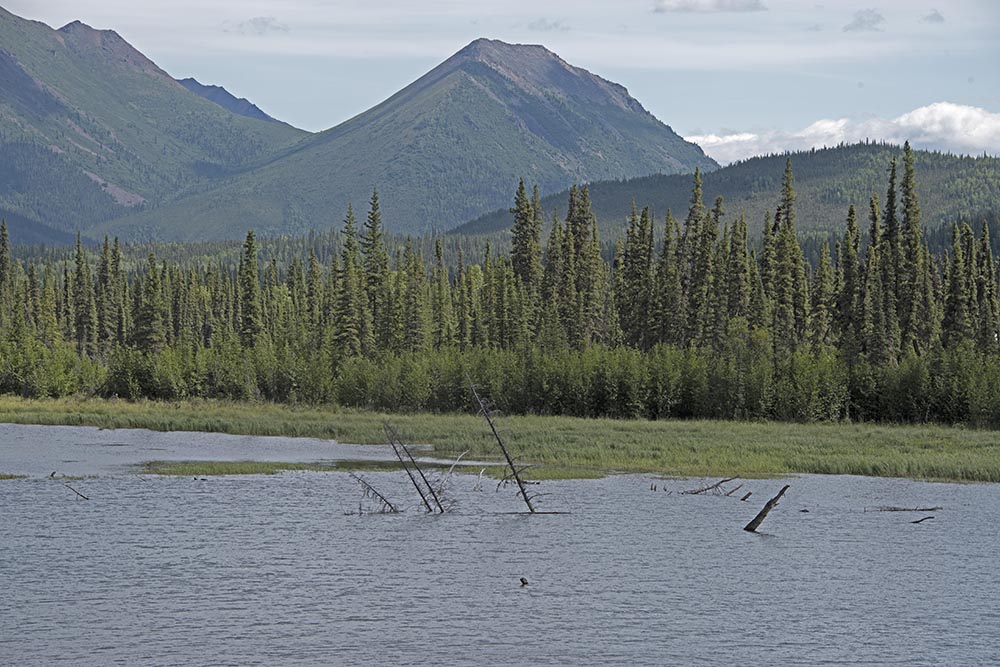 Permafrost can be thousands of feet deep and it has just begun to melt. This deep permafrost melt pool is in Southeastern Alaska along the Glenn Highway. 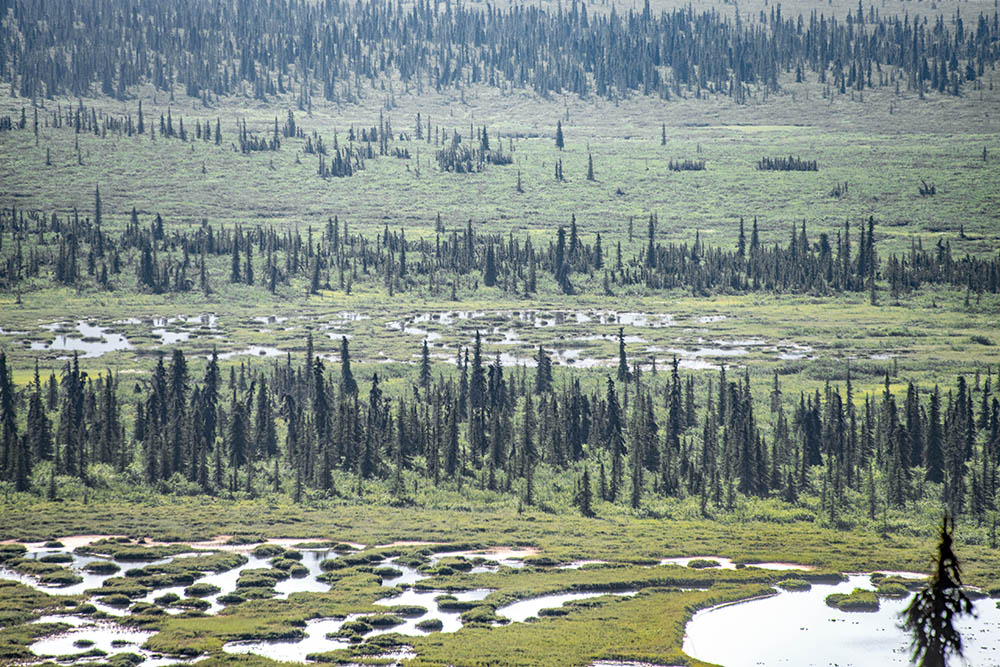 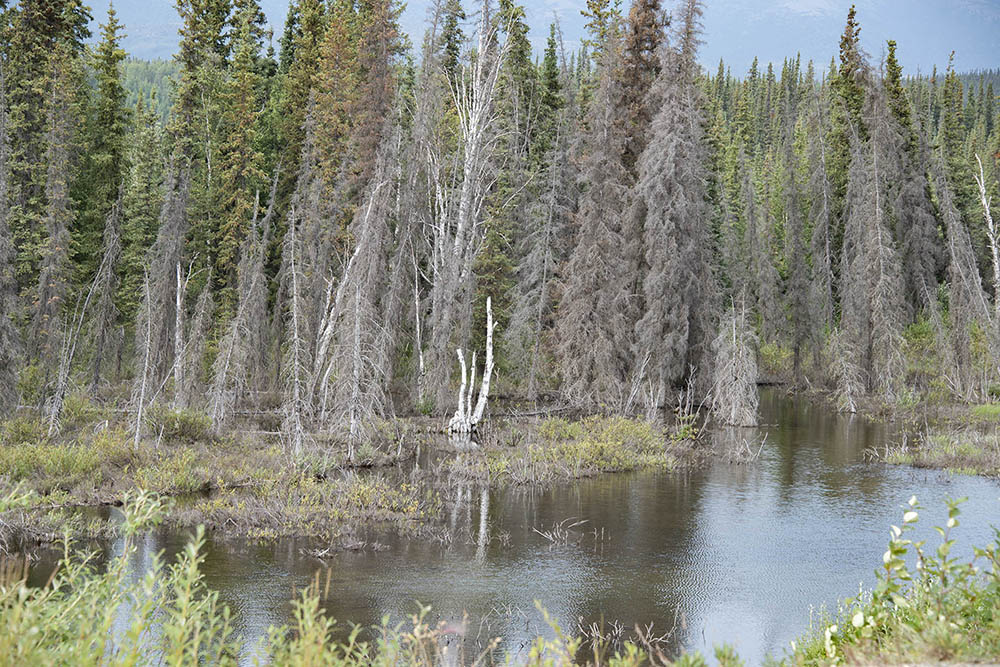 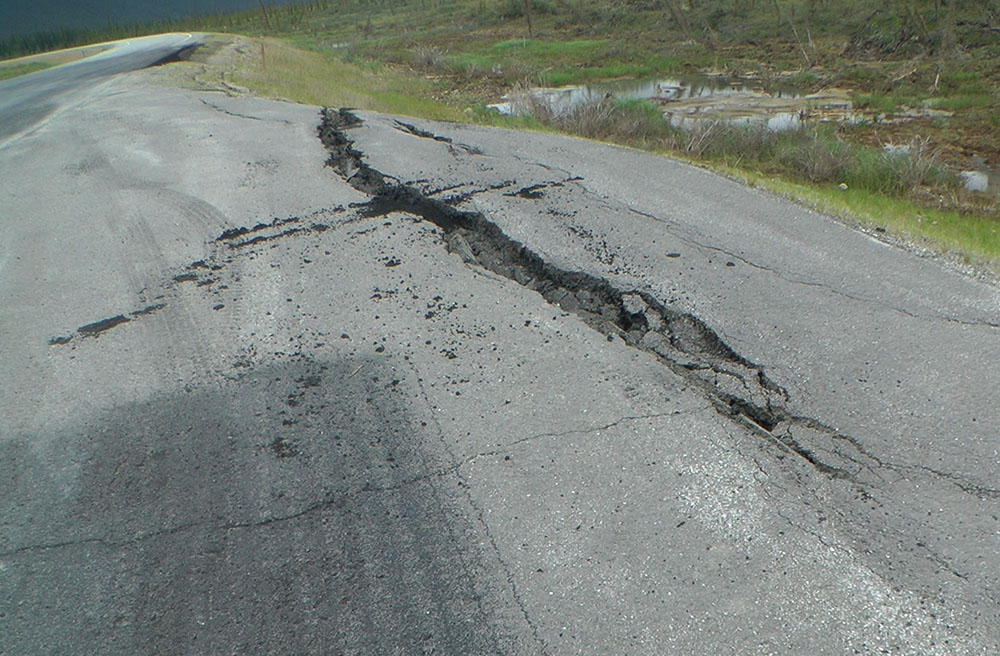 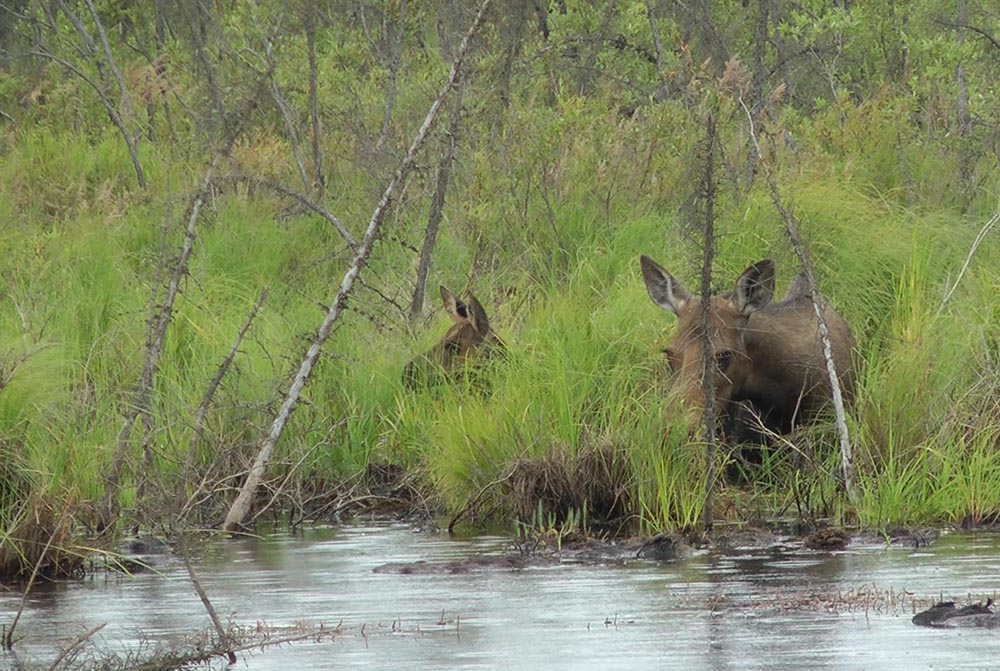 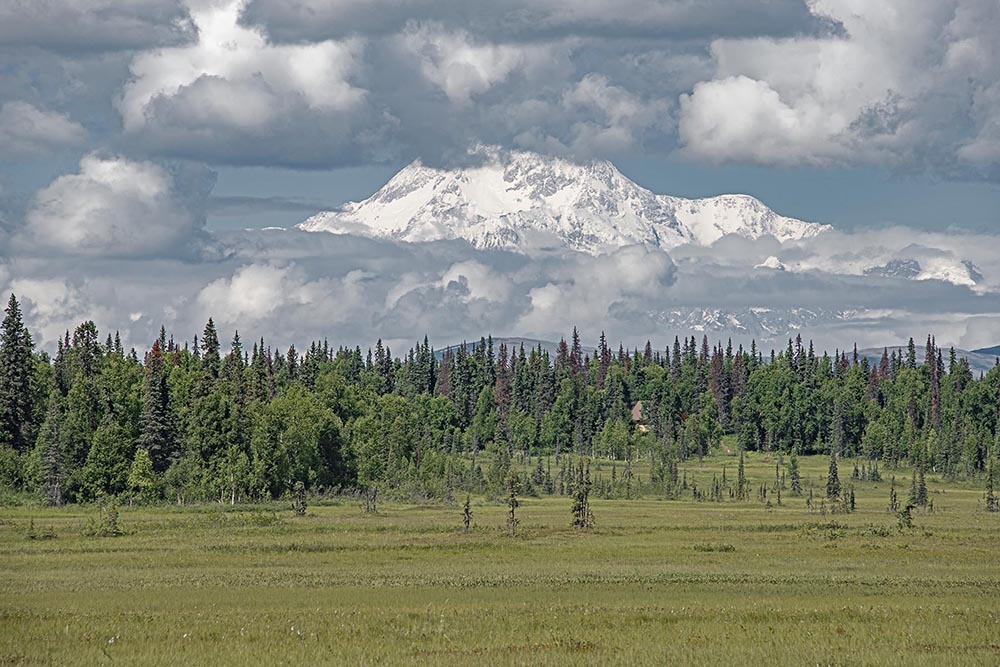 Please tell your friends with philanthropic resources that we need funding to complete this film. Thanks.