IPCC Special Report on Oceans and Cryosphere, The Important Bits 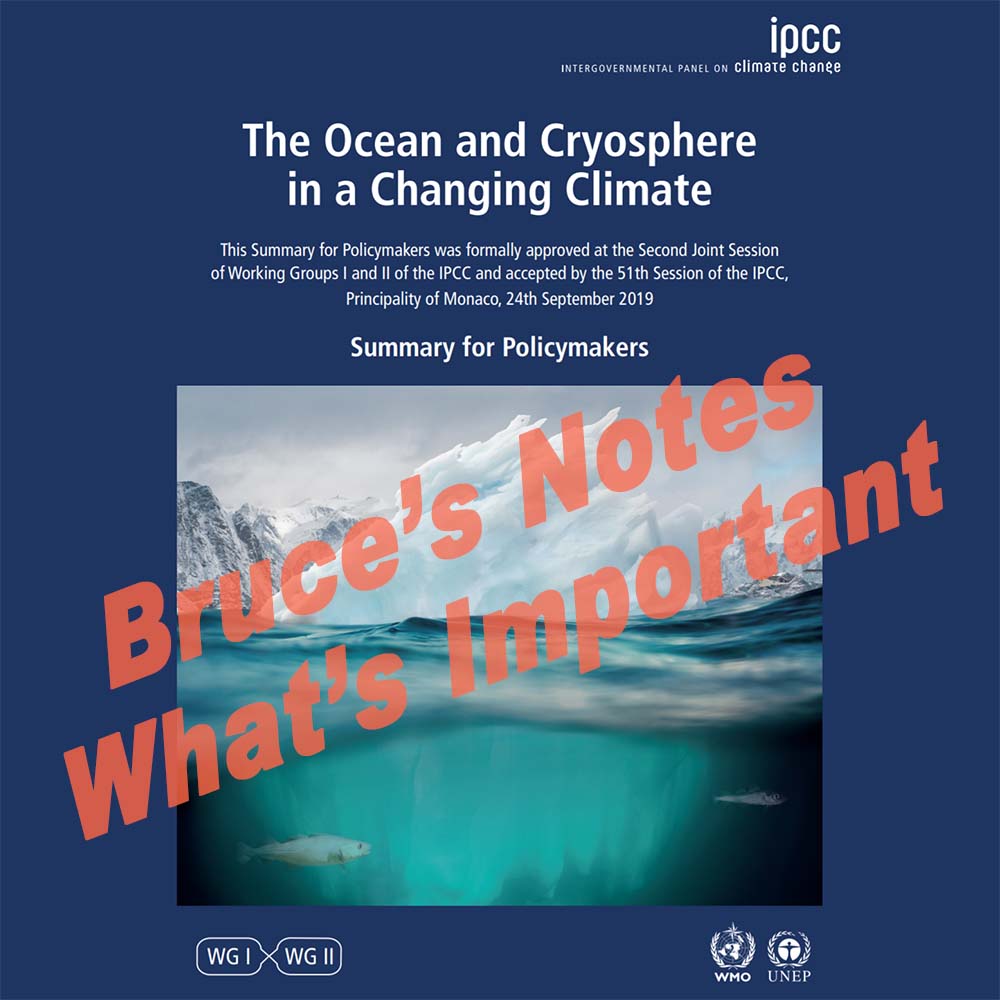 Intergovernmental Panel on Climate Change (IPCC) Report, September 24, 2019
The Ocean and Cryosphere (the icy part of our planet) in a Changing Climate
A Summary of Important Findings

Overall of course, climate change is astonishingly worse with every new report. This one is no exception. Polar and mountain ice are melting faster, the middle estimate of sea level rise is now up to four feet this century, and adaptation limits loom, meaning migration and abandonment will happen sooner rather than later. Caution is also advised with interpretation of this report or any science when risks are high because the science understates. Consensus reports are no exception and are actually understated to a greater degree, relative to recently published science. The reasons are because findings related to rapidly changing trends cannot be fully represented in statistical analyses, obtaining a consensus when evidence discovery is new to science is difficult, and climate modeling is as yet incapable of robustly resolving abrupt changes and collapses. So what this means is that even though this report summarizes what appears to be apocalyptic climate impacts either happening already or projected to happen, in the real world impacts are and will likely be worse and we should plan on worst-case scenario or worse impacts.

The highlights of what I believe are the most important things are presented below, their individual bullets from the Summary for Policy Makers follow. Mostly I have used the words of IPCC authors, simplified a bit when necessary. These are presented in the order that they are presented in the report and are not ranked for importance:

The bullets from IPCC’s new report Summary for Policy Makers are presented below:

The report can be found here.

A1.3 Permafrost temperatures have increased to record high levels (1980s-present) (very high
confidence) including the recent increase by 0.29°C ± 0.12°C from 2007 to 2016 averaged across polar and high mountain regions globally. Arctic and boreal permafrost contain 1460–1600 Gt organic carbon, almost twice the carbon in the atmosphere (medium confidence). There is medium evidence with low agreement whether northern permafrost regions are currently releasing additional net methane and CO2 due to thaw. Permafrost thaw and glacier retreat have decreased the stability of high-mountain slopes (high confidence). {2.2.4, 2.3.2, 3.4.1, 3.4.3, Figure SPM.1}

A1.4 Between 1979 and 2018, Arctic sea ice extent has very likely decreased for all months of the year. September sea ice reductions are very likely 12.8 ± 2.3% per decade. These sea ice changes in September are likely unprecedented for at least 1000 years. Arctic sea ice has thinned, concurrent with a transition to younger ice: between 1979 and 2018, the areal proportion of multi-year ice at least five years old has declined by approximately 90% (very
high confidence). Feedbacks from the loss of summer sea ice and spring snow cover on land have contributed to amplified warming in the Arctic (high confidence) where surface air temperature likely increased by more than double the global average over the last two decades. Changes in Arctic sea ice have the potential to influence mid-latitude weather (medium confidence), but there is low confidence in the detection of this influence for specific weather types. Antarctic sea ice
extent overall has had no statistically significant trend (1979–2018) due to contrasting regional signals and large interannual variability (high confidence). {3.2.1, 6.3.1; Box 3.1; Box 3.2; A1.2, Figures SPM.1, SPM.2}

A6.1 Vegetated coastal ecosystems protect the coastline from storms and erosion and help buffer the impacts of sea level rise. Nearly 50% of coastal wetlands have been lost over the last 100 years, as a result of the combined effects of localised human pressures, sea level rise, warming and extreme climate events (high confidence). Vegetated coastal ecosystems are important carbon stores; their loss is responsible for the current release of 0.04–1.46 GtC yr–1 (medium confidence). In response to warming, distribution ranges of seagrass meadows and kelp forests are expanding at high latitudes and contracting at low latitudes since the late 1970s (high confidence), and in some areas episodic losses occur following heatwaves (medium confidence). Large-scale mangrove mortality that is related to warming since the 1960s has been partially offset by their encroachment into subtropical salt marshes as a result of increase in temperature, causing the loss of open areas with herbaceous plants that provide food and habitat for dependent fauna (high confidence). {4.3.3, 5.3.2, 5.3.6, 5.4.1, 5.5.1, Figure SPM.2}.

B1.4 Widespread permafrost thaw is projected for this century (very high confidence) and beyond. By 2100, projected near-surface (within 3–4 m) permafrost area shows a decrease of 24 ± 16% (likely range) for RCP2.6 and 69 ± 20% (likely range) for RCP8.5. The RCP8.5 scenario leads to the cumulative release of tens to hundreds of
billions of tons (GtC) of permafrost carbon as CO2 and methane to the atmosphere by 2100 with the potential to exacerbate climate change (medium confidence). Lower emissions scenarios dampen the response of carbon emissions from the permafrost region (high confidence). Methane contributes a small fraction of the total additional carbon release but is significant because of its higher warming potential. Increased plant growth is projected to replenish soil carbon in part, but will not match carbon releases over the long term (medium confidence). {2.2.4, 3.4.2, 3.4.3, Figure SPM.1, Cross-Chapter Box 5 in Chapter 1}

B3.3 The rate of global mean sea level rise is projected to reach 15 mm yr–1 (10–20 mm yr–1, likely range) under RCP8.5 in 2100, and to exceed several centimetres per year in the 22nd century. Under RCP2.6, the rate is projected to reach 4 mm yr-1 (2–6 mm yr–1, likely range) in 2100. Model studies indicate multi-meter rise in sea level by 2300 (2.3–5.4 m for RCP8.5 and 0.6–1.07 m under RCP2.6) (low confidence), indicating the importance of reduced emissions for limiting sea level rise. Processes controlling the timing of future ice-shelf loss and the extent of ice sheet instabilities could increase Antarctica’s contribution to sea level rise to values substantially higher than the likely range on century and longer time-scales (low confidence). Considering the consequences of sea level rise that a  collapse of parts of the Antarctic Ice Sheet entails, this high impact risk merits attention. {Cross-Chapter Box 5 in Chapter 1, Cross-Chapter Box 8 in Chapter 3, 4.1, 4.2.3} B3.4 Global mean sea level rise will cause the frequency of extreme sea level events at most locations
to increase. Local sea levels that historically occurred once per century (historical centennial events) are projected to occur at least annually at most locations by 2100 under all RCP scenarios (high confidence). Many low-lying megacities and small islands (including SIDS) are projected to experience historical centennial events at least annually by 2050 under RCP2.6, RCP4.5 and RCP8.5. The year when the historical centennial event becomes an annual event in the mid-latitudes occurs soonest in RCP8.5, next in RCP4.5 and latest in RCP2.6. The increasing frequency of high water levels can have severe impacts in many locations depending on the level of exposure (high confidence). {4.2.3; 6.3; Figures SPM.4, SPM.5}

B9.1 In the absence of more ambitious adaptation efforts compared to today, and under current trends of increasing exposure and vulnerability of coastal communities, risks, such as erosion and land loss, flooding, salinization, and cascading impacts due to mean sea level rise and extreme events are projected to significantly increase throughout this century under all greenhouse gas emissions scenarios (very high confidence). Under the same assumptions, annual coastal flood damages are projected to increase by 2–3 orders of magnitude by 2100 impaired to today (high confidence). {4.3.3; 4.3.4; Box 6.1; 6.8; SM4.3; Figures SPM.4, SPM.5}

B9.2 High to very high risks are approached for vulnerable communities in coral reef environments, urban atoll islands and low-lying Arctic locations from sea level rise well before the end of this century in case of high emissions scenarios. This entails adaptation limits being reached, which are the points at which an actor’s objectives (or system needs) cannot be secured from intolerable risks through adaptive actions (high confidence). Reaching adaptation limits (e.g., biophysical, geographical, financial, technical, social, political, and institutional) depends on the emissions scenario and context-specific risk tolerance, and is projected to expand to more areas beyond 2100, due to the long-term commitment of sea level rise (medium confidence). Some island nations are likely to become uninhabitable due to climate related ocean and cryosphere change (medium confidence), but habitability thresholds remain extremely difficult to assess. {4.3.4, 4.4.2, 4.4.3, 5.5.2, Cross-Chapter Box 9, SM4.3, SPM C1, Glossary, Figure SPM.5}

B9.3 Globally, a slower rate of climate-related ocean and cryosphere change provides greater
adaptation opportunities (high confidence). While there is high confidence that ambitious adaptation, including governance for transformative change, has the potential to reduce risks in many locations, such benefits can vary between locations. At global scale, coastal protection can reduce flood risk by 2–3 orders of magnitude during the 21st century, but depends on investments on the order of tens to several hundreds of billions of US$ per year (high confidence). While such investments are generally cost efficient for densely populated urban areas, rural and poorer areas may be challenged to afford such investments with relative annual costs for some small island states amounting to several percent of GDP (high confidence). Even with major adaptation efforts, residual risks and associated losses are projected to occur (medium confidence), but context-specific limits to adaptation and residual risks remain difficult to assess. {4.1.3, 4.2.2.4, 4.3.1, 4.3.2, 4.3.4., 4.4.3, 6.9.1, 6.9.2, Cross-Chapter Boxes 1–2 in Chapter 1, SM4.3, Figure SPM.5}

C2.4 Restoration of vegetated coastal ecosystems, such as mangroves, tidal marshes and seagrass meadows (coastal ‘blue carbon’ ecosystems), could provide climate change mitigation through increased carbon uptake and storage of around 0.5% of current global emissions annually (medium confidence). Improved protection and
management can reduce carbon emissions from these ecosystems. Together, these actions also have multiple other benefits, such as providing storm protection, improving water quality, and benefiting biodiversity and fisheries (high confidence). Improving the quantification of carbon storage and greenhouse gas fluxes of these coastal ecosystems will reduce current uncertainties around measurement, reporting and verification (high confidence). {Box 4.3, 5.4, 5.5.1, 5.5.2,
Annex I: Glossary}
C3.4 Despite the large uncertainties about the magnitude and rate of post 2050 sea level rise, many
coastal decisions with time horizons of decades to over a century are being made now (e.g., critical infrastructure, coastal protection works, city planning) and can be improved by taking relative sea-level rise into account, favouring flexible responses (i.e., those that can be adapted over time) supported by monitoring systems for early warning signals, periodically adjusting decisions (i.e., adaptive decision making), using robust decision-making approaches, expert judgement, scenario-building, and multiple knowledge systems (high confidence). The sea level rise range that needs to be considered for planning and implementing coastal responses depends on the risk tolerance of stakeholders. Stakeholders with higher risk tolerance (e.g., those planning for investments that can be very easily adapted to unforeseen conditions) often prefer to use the likely range of projections, while stakeholders with a lower risk tolerance (e.g., those deciding on critical infrastructure) also consider global and local mean sea level above the upper end of the likely range (globally 1.1 m under RCP8.5 by 2100) and from methods characterised by lower confidence such as from expert elicitation. {1.8.1, 1.9.2, 4.2.3, 4.4.4, Figure 4.2, Cross-Chapter Box 5 in Chapter 1, Figure SPM.5, SPM B3}
C4.1 In light of observed and projected changes in the ocean and cryosphere, many nations will face challenges to adapt, even with ambitious mitigation (very high confidence). In a high emissions scenario, many ocean and cryosphere-dependent communities are projected to face adaptation limits (e.g. biophysical, geographical, financial, technical, social, political and institutional) during the second half of the 21st century. Low emission pathways, for comparison, limit the risks from ocean and cryosphere changes in this century and beyond and enable more effective responses (high confidence), whilst also creating co-benefits. Profound economic and institutional transformative change will enable Climate Resilient Development Pathways in the ocean and cryosphere context (high confidence). {1.1, 1.4– 1.7, Cross-Chapter Boxes 1–3 in Chapter 1, 2.3.1, 2.4, Box 3.2, Figure 3.4, Cross-Chapter Box 7 in Chapter 3, 3.4.3, 4.2.2, 4.2.3, 4.3.4, 4.4.2, 4.4.3, 4.4.6, 5.4.2, 5.5.3, 6.9.2, Cross-Chapter Box 9, Figure SPM.5}