A Perspective on Air Capture of Carbon Dioxide: Much Easier than Media Reporting Suggests 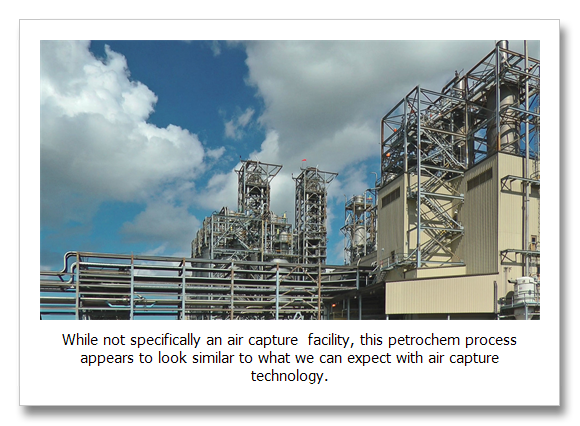 Direct atmospheric removal (air capture) should not be confused with geoengineering. These air capture techniques, old and new, remove CO2 from the atmosphere just like we remove other pollutants from say, water in our wastewater facilities, or simply sweeping up dirt from the kitchen floor.

Existing technologies extract CO2 from the air with chemicals such as sodium hydroxide (lye), or designer chemicals, at high temperatures in a controlled and confined process–such as smokestack sequestration from coal fired power plants. Gases from coal combustion are sprayed with a fine mist of these chemicals in a confined vessel and the gases absorb the CO2. The CO2 is then removed from the chemicals with 700 degree C temperature (1300 F) and collected for disposal or further reduction to carbonate minerals for disposal either as a quasi-liquid in underground formations or mixed with pulverized (ultramific) rocks (high in magnesium) that readily react with the CO2 and change it into solid rock-like substances that trap the CO2 permanently (like limestone–calcium carbonate, magnesium carbonate–chalk).

New technologies remove carbon from the air with similar techniques that use much lower temperatures to extract the CO2 and are much more efficient at the process (100 degrees C or less, 212 F). These new technologies have also been developed to use certain kinds of plastics that have a high capacity for carbon dioxide absorption (polyester-like materials).

In this process where plastics are used (sometimes referred to as artificial trees), plain old air from anywhere is moved across plastic sheets where CO2 attaches to the plastic something like dirt on your car after a rain. The CO2 is then literally washed off of the plastic with water, collected and disposed of in the same ways as with smokestack removal techniques. There are also hybrid strategies that use designer chemicals to suck CO2 straight out of the atmosphere.

Atmospheric removal has been much maligned by vested interests who propagandize about a few studies that show high costs, but these studies do not directly or completely evaluate new technologies (American Physical Society see below). They look at existing high temperature processes instead, and the words we hear from media sources are “economically infeasible.” What should be reported using fair comparisons is much the opposite. But remember, these studies that question do not have to compare anything–they simply have to evaluate technique and report. leaving out one technique or another is not poor scientific practice. Using these studies alone to establish policy however, is poor science.

The state of air capture technology, while still young, has evolved to include several field trials that show great promise and very low costs—far lower than the APS paper suggests. This air capture infeasibility conundrum created by the climate change counter movement is an easy myth to bust, but this knowledge is almost non existent in the popular media.

The APS paper literally only looked at current technology and the paper was reviewed for what it was worth by the prestigious journal Nature. What they said was: “The study – published by the American Physical Society on 9 May – doesn’t put a figure on the costs of innovative technologies from researchers and private companies who claim to be able to capture CO2 from air more cheaply.”

Criticism of air capture abounds and ranges from energy costs to complacency. The energy costs are well discussed in the literature and what is often cited as a break point is cheap solar energy. Today the prospects for cheap solar energy could not be greater as at least five solar facilities across the country are now under contract or are currently being built with costs as low as fracked natural gas. Projections or the future are the solar will continue it’s rapid decline in costs for the foreseable future.

Concerns about complacency, while well meaning, are they really based in reality? If we clean up trash on the roadside, does this mean that more people will litter?

The part of the discussion that seals the deal however is that the IPCC has now indicated that only strong negative emissions will stave off dangerous climate change. Annual emissions reductions are still important of course, but because we have emitted as much CO2 since 1987 as we emitted in the previous 236 years, and we have done almost nothing about reducing emissions or cleaning up the accumulated carbon pollution in our sky, we have no choice. We must begin to clean somr of the climate pollution out of our sky. The IPCC has now suggests ‘strong negative emissions.” What this means is that we need to remove more carbon from the sky than we emit every year—strongly more.

Below is a compilation of resources for further evaluation;

Roger Pielke, noted climate scientists and often quoted skeptic, as far back as 2009, was optimistic and the results of his evaluation showed similar costs of air capture to currently proposed mitigation strategies.
Pielke, An idealized assessment of the economics of air capture or carbon dioxide in mitigation policy, Environmental Science and Policy, 2009.
http://sciencepolicy.colorado.edu/admin/publication_files/resource-2716-2009.03.pdf
What Pielke wrote about this paper in his blog:
http://rogerpielkejr.blogspot.com/2013/01/air-capture-update-2013-stil-progressing.html

Flue capture $60 per ton, $500 or more for air capture… A summary of recent literature.
Goeppert et al., Air as the renewable carbon source of the future – CO2 Capture from the atmosphere, Energy and Environmental Science, May 1, 2012. Section 5.10, paragraph 1: “The cost of direct CO2 capture from air will highly influence the overall economic feasibility of the utilization of atmospheric CO2 as carbon feedstock. Using current technologies, the cost to remove a ton of CO2 from point sources such as a coal burning power plant that contain 10–15% CO2  has been estimated between $30 and $100. The cost of direct air capture (DAC) on the other hand varies vastly from about $20 to more than $1000 per ton of CO2.”
Abstract only: http://pubs.rsc.org/en/Content/ArticleLanding/2012/EE/c2ee21586a#!divAbstract

More Extracts from Goeppert et al.
$20 per ton (just over) capture and storage… Section 5.10 paragraph 2, “using the K2CO3/KHCO3 cycle is described as being able to capture CO2 from air for less than $20 per ton. The total cost including sub-surface injection was estimated to be slightly above $20 per ton.”
$49 to $80 per ton… Section 5.10 paragraph 3: “An air capture system designed by Keith et al. using a Na/Ca cycle was estimated to cost approximately $500 per ton C ($140 per ton CO2).81,98 The authors added that about a third of this cost was related to capital and maintenance cost. Further development and optimization of the system by Carbon Engineering Ltd.113 for the effective extraction of CO2 from air resulted in the decrease of the estimated cost to $49–80 per tonne CO2.”
$30 per ton long term… Section 5.10, paragraph 5: “Lackner and co-workers developed an anionic exchange resin able to release CO2 in a moisture swing process. The cost of only the energy required per ton of CO2 collected was around $15. The initial cost of air capture including manufacturing and maintenance can be estimated at about $200 per ton of CO2. However, this cost is expected to drop considerably as more collectors are built, possibly putting CO2 capture in the $30 per ton range in the long term.”
Conclusion, first paragraph… “Despite its very low concentration of only 390 ppm, the capture of CO2 directly from the air is technically feasible. Theoretically, CO2 capture from the atmosphere would only require about 2 to 4 times as much energy as capture from flue gases, which is relatively modest considering that at the same time the CO2 concentration is decreased by roughly a factor of 250–300.”

A very important factor on air capture research: “Almost $7 billion federal dollars have been spent on research and development on methods to capture carbon from flue gas. The total federal investment for CO2 capture from air may be as little as $300,000.”
Jones, Removing Carbon Dioxide from the Atmosphere: Possibilities and Challenges of Air Capture, page 13, Frontiers of Engineering, National Academy of Engineering Symposium 2012, National Academy of Sciences. page 16, fourth paragraph.
http://www.nap.edu/openbook.php?record_id=18185&page=13