In a paper in Climatic Change, Researchers from Drexler University, the University of Montreal and Ohio State have found that politics and economics (unemployment) are the most important things that shape our thoughts about climate change.

When the economy is tight and or when our politicians are actively advocating for or against climate change science, public opinion shifts the most. The authors looked at science knowledge, extreme weather and even media coverage and these things in general, had little statistical influence on the public’s belief one way or another about climate change.

But when the economy is bad, we are too concerned about where the money is going to come from to worry about the “perceived” threat from climate change. Likewise, when we see our leaders working hard to advance or defeat action on climate change, we change our views to match these actions. But hurricanes, tornadoes and floods make little difference. It doesn’t seem to matter a great deal how much these extreme weather events are in the media. The number of scientific papers published on climate change doesn’t seem to matter much either.

These two things, politics and the economy though, make the case. Since 1986, nearly 300 public opinion polls have been taken dealing with climate change. The data from this large body of work was evaluated and correlated to things like Copenhagen, the movie The Day After Tomorrow, Al Gore’s An Inconvenient Truth, extreme weather outbreaks, media coverage of congressional actions about climate and other similar events.

The authors do admit that even this large amount of data has its flaws. Until recently, thorough, unbiased polls have not been repeated over long enough time frames to come to valid statistical conclusions about the trend of public opinion. They also tell us that in a few more years current work will remedy this situation. Until then, the modeling compiled from this work does have some decent statistical validity. 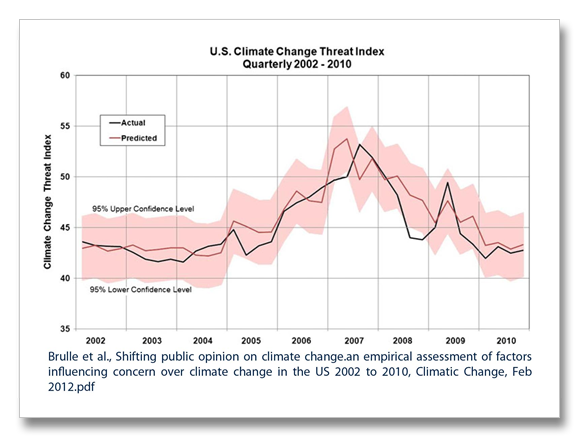 The authors have developed a Climate Change Threat Index (CCTI) that shows the general sentiment of the public at any given time. From this CCTI, they can map out the different influences in our society and draw conclusions. Those influencing factors have been well identified in previous literature and in addition to the above include: publicly made positions of industry and religious leaders (what they call “elite cues”), climate denier and climate skeptic tactics, increasing drought and temperatures, information deficit—when politics make it “inconvenient” to discuss climate change issues, the inherent difficulty of understanding climate change, limitations of personal experience, and inappropriate mental models (understanding that weather and climate are the same thing), wars and energy prices.

One of the flaws that I see in this work is the lack of any relationship with media coverage, one way or the other. Events like the great tornado outbreaks, floods, snowpocalypses and hurricanes, and climategates of all sorts, failed to move the CCTI in a statistically significant way. But the facts are that these things made no difference. Maybe it is those “inappropriate mental models.” Incomplete knowledge about the difference between weather and climate is a good example. The inherent difficulty of understanding climate science is another. Public knowledge simply may not exist in a great enough quantity to evaluate the extreme weather events as being a part of climate change. Especially when so many television weather personalities refuse to become a part of the perceived controversy. Weather extremes today have actually crossed the line into climate change territory, but the same old line about “any one individual weather event not being attributable to climate change” is ever present in the media, even when the extremes have been shown to be significantly caused by climate change.

Amazingly, only a few things other than politics (elite cues) and economics (recession and unemployment) made any difference. One was An Inconvenient Truth and its subsequent Academy Award. The release of major climate assessments and individual articles in popular science magazines had slightly significant impacts. Democrats releasing public statements had about a 30 percent greater impact than did Republican releases.

Of most importance in this study was the finding concerning voting habits of Republicans in the House and Senate. When Republicans made a big deal about climate legislation, public support of climate science fell whereas Democratic voting had no discernible effect.

A personal opinion: The basis of this work looks back decades, but great changes in our climate have come around only in the last several years. It’s quite possible that new work on the subject will show an increasing relationship between the overall public perception of climate change as it is related to weather extremes. There has been work done that does look at individual’s impacted by climate extremes and their own individual beliefs about climate change. This work does show a significant relationship that the understanding of climate science does increase with personal impacts of climate extremes, but the number of individuals impacted is small relative to the overall population. As the number of extremes increase and the number of individuals impacted by these extremes increases, it will likely change the general opinions of the overall population.

The long time period for this study does not allow this connection. This is a primary example of how climate science  (or any science) is conservative. There is no statistical way to prove very short term trends. Logically, because projections have been telling us for decades that extremes would increase, we can make the leap. But most often in peer reviewed literature, the leap must be made off of a cliff shored up by statistics.