Climate Change Communications From the Media – A Mini Symposium

Global Warming Psychology 101: Our climate has changed, but the message is not getting through. How can the media better present current climate science so that the public can convince our leaders to act?

Jim Spencer is the Chief Meteorologists at KXAN in Austin where he has been for 23 years. He graduated with honors from East Central University in Ada, Oklahoma and did his post-grad work in Meteorology studies at Mississippi State University’s Broadcast Meteorology program. Jim was voted Austin’s Best Weathercaster by readers of Austin Chronicle 12 times. He has been named TV Personality of the Year by Austin’s American Women in Radio and Television Chapter four times, including his most recent 2010 award. He is a five-time winner of the Texas Associated Press Best Weathercast award, and in was the 2011 winner of the Best Weathercast Award by the Texas Associated Press Broadcasters. His professional affiliations include the National Weather Association and the American Meteorological Society.

Dr. Andrew Dessler, is a climate scientist who studies both the science and politics of climate change. His scientific research revolves around climate feedbacks, in particular how water vapor and clouds act to amplify warming from the carbon dioxide that humans emit. In 2012, he received the AGU’s Ascent Award from the atmospheric sciences section for exceptional achievement. During the last year of the Clinton Administration, he served as a Senior Policy Analyst in the White House Office of Science and Technology Policy. Based on his research and policy experience, he has authored two books on climate change: The science and politics of global climate change: A guide to the debate (Cambridge University Press, 2006, 2010, co-written with Edward Parson), and Introduction to modern climate change (Cambridge University Press, 2011). This latter book won the 2013 AMS Louis J. Battan Author’s Award. In recognition of his work on outreach, in 2011 he was named a Google Science Communication Fellow. Prior to his work on climate, his research focused on stratospheric ozone depletion. He is presently a Professor of Atmospheric Sciences at Texas A&M University. His educational background includes a BA in physics from Rice University and a Ph.D. in chemistry from Harvard University. He also did postdoctoral work at NASA’s Goddard Space Flight Center and spent nine years on the research faculty of the University of Maryland. Prior to graduate school, he worked on Wall Street in the energy group at The First Boston Corporation doing mergers and acquisitions analysis.

Dr. Kris Wilson re-joined the UT School of Journalism in 2009. He is an award winning reporter, producer, news director and anchor who spent a decade working in television news. He holds a doctorate in geography from the University of Colorado at Boulder where he specialized in climatology and geographic education and a master’s degree from Ohio State University, where he was a Kiplinger Fellow and specialized in environmental journalism. His peer reviewed work as been published in Science Communication, Mass Communication Review, The Journal of Geography, Public Understanding of Science, National Weather Digest, Electronic News and in the book Environmental Risks and the Media. He was a finalist for the College of Communication Teaching Excellence Award in 2012 and was nominated for the Regents Teaching Award this year. In addition to UT, he’s taught at Emory University, Kansas and the University of Alaska.

Brad Johnson is the campaign manager of Forecast the Facts, a grassroots human rights organization dedicated to ensuring that Americans hear the truth about climate change. He was previously the editor for ThinkProgress Green. Brad holds a bachelor’s degree in math and physics from Amherst College and master’s degree in geosciences from the Massachusetts Institute of Technology.

Moderated by:
Bruce Melton PEgraduated from Texas A&M University in 1983 as a civil engineering and founded Melton Engineering Services Austin in 2001. His research was in stormwater quality treatment under the EPA Clean Water Act, where he was first introduced to academic literature on climate science. The great disconnection between the literature and the public motivated him to begin writing and filming about the topic in 2004.  His work is cutting edge outreach, taking advantage of his EPA science outreach training. Bruce is a board member of the Austin Region Sierra Club and a specialist in Edwards Aquifer and transportation issues. He is also the Executive Director of the nonprofit Climate Change Now Initiative which has produced about 400 reports on academic climate science literature, two documentaries, about 50 articles for the popular press and a book “Climate Discovery Chronicles: Recent, Relatively Unknown Discoveries in Climate Science.”

Special Speaker:
Alyssa Burginis a fifth-generation Texan, daughter of an artist and a labor union organizer. She attended the University of Texas, originally intending to enter the public health world and majoring in microbiology and physics, but she graduated with a master’s degree in journalism. During her years in Austin, she was active in politics and issue advocacy. Most of her career has been in political communication, with stints in national, state and local campaigns and crisis communications for NGO’s. In June of 2009, she co-founded the Texas Drought Project with Austinite Jere Locke with the goal of educating Texans on climate change through the lens of drought, and has since coordinated numerous environmental film festivals, conferences and symposia. 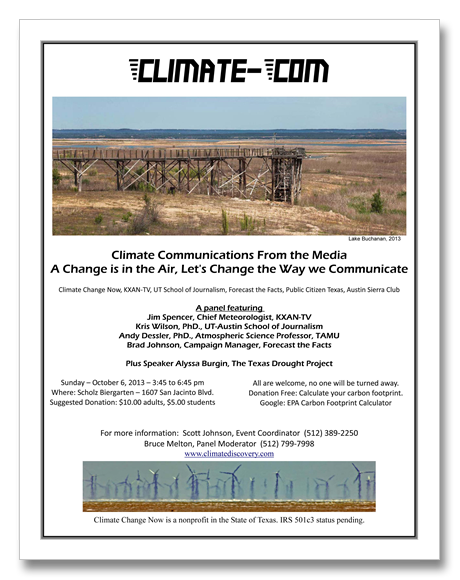