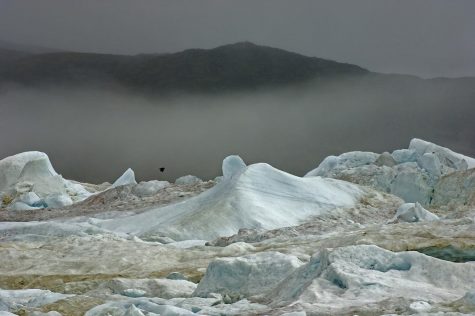 The Jakobshavn glacier in Greenland is the fastest-discharging glacier in the world. Pictured here is its “melange,” the result of a disintegrating ice sheet, which is comprised of “brash” (crushed ice), “growlers” (teeny icebergs) and “bergy bits” (small icebergs). The Jakobshavn glacier discharges 45 megatons of ice per day, or about the same weight as 16,000 air craft carriers per year. Its discharge has increased 400 percent in the last 20 years. (Photo: Bruce Melton)

With president-elect Donald Trump and his army of climate deniers preparing to take office, it could be a hard battle to get the US to adhere to any sort of climate policy anytime soon. This is hard news because today’s suggested but nowhere-implemented climate policy was already much less restrictive than the climate policy from the mid-1990s. In a world where we have emitted as much carbon dioxide since 1987 as was emitted in the previous 230 years, why has policy not become more stringent? This outdated emissions reductions policy has earned the title “legacy,” not because it is worthy of recognition, or something we want to pass on to future generations, but because it is like “legacy software,” in that “it is difficult to replace because of its wide usage.”

Read the rest of the article here