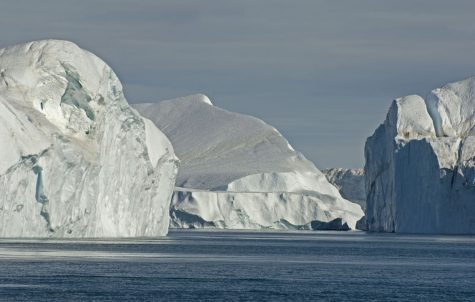 An iceberg armada at the mouth of the Ilulissat Icefjord that funnels discharges from the world’s fastest and most prolific ice sheet discharge glacier in Greenland. Ice loss from Greenland has increased 500 percent 2002 to 2011.

This New York Times article from May has compiled the best of current Antarctic science images into a huge three-part piece, but some of the most important reporting is completely wrong. And most importantly, the way it is wrong exemplifies the impacts of the Climate change Counter Movement and how they have influenced the media’s fairness bias. (NYT Article — Racing to Find Answers in the Ice)

This Climate Change Counter Movement, first defined by Brulle 2013, has no boundaries and its hooks are deepest in the media’s quest to be balanced. This “fairness” behavior is great journalistic morality for issue-based discussions, but for fact-based discussion, it doesn’t work for beans. What we see in this piece in two very critical instances as “fairness bias” reporting, first described in 2004, is alive and well today.

NYT reported Rob DeConto–one of the breakthrough scientists that has finally modeled ice sheet collapse somewhere close to successfully, as saying “We could be decades too fast, or decades too slow.” There is a scientific reality in this statement that is true, but completely unfounded in first-ever physics DeConto and his co researcher David Pollard modeled in this effort. There is always scientific uncertainty and somewhere in the NYT interview, DeConto did his duty to define this uncertainty. But the fundamental truth remains and NYT completely missed it.

Deconto told me in a personal email, when I asked him about how their new physics reconciles with sea level rise evidence from prehistory that is up to 25 times faster (Blanchon 2009) than the IPCC consensus, that they had to imply an artificial speed limit to the new physics they are modeling because basically–the results were simple too far exaggerated from the consensus understanding to be believable. In other words, their certainty was not robust. So they dialed back the speed of collapse to increase their certainty.

What Deconto and Pollard’s work says is that the 2100 contribution from Antarctica alone is a meter–speed limiter engaged. What prehistoric evidence says is that ice sheet collapse can cause sea level jumps as fast as 6.5 to 10 feet in 10 to 24 years, from Blanchon 2009 above, during the last interglacial 122,000 years ago when the temperature was virtually identical to today. Only warming today has massive dynamics never present in prehistory. This likely means greater forcing from ocean warming than in prehistory.

Th NYT goes on to make another classic fairness bias blunder by saying that scientist don’t know for sure that warming water around Antarctica is from global warming or not. For 20 years we have modeling that winds would increase globally on a warmer planet and for a decade evidence that this is happening.  Now we have physics showing how thermally driven underice melt currents feedback to suck ocean water hundreds of miles beneath the ice sheet melting as much as 100 meters vertically per year in the most extreme underice troughs beneath the most delicately balanced and largest of the ice discharge streams. 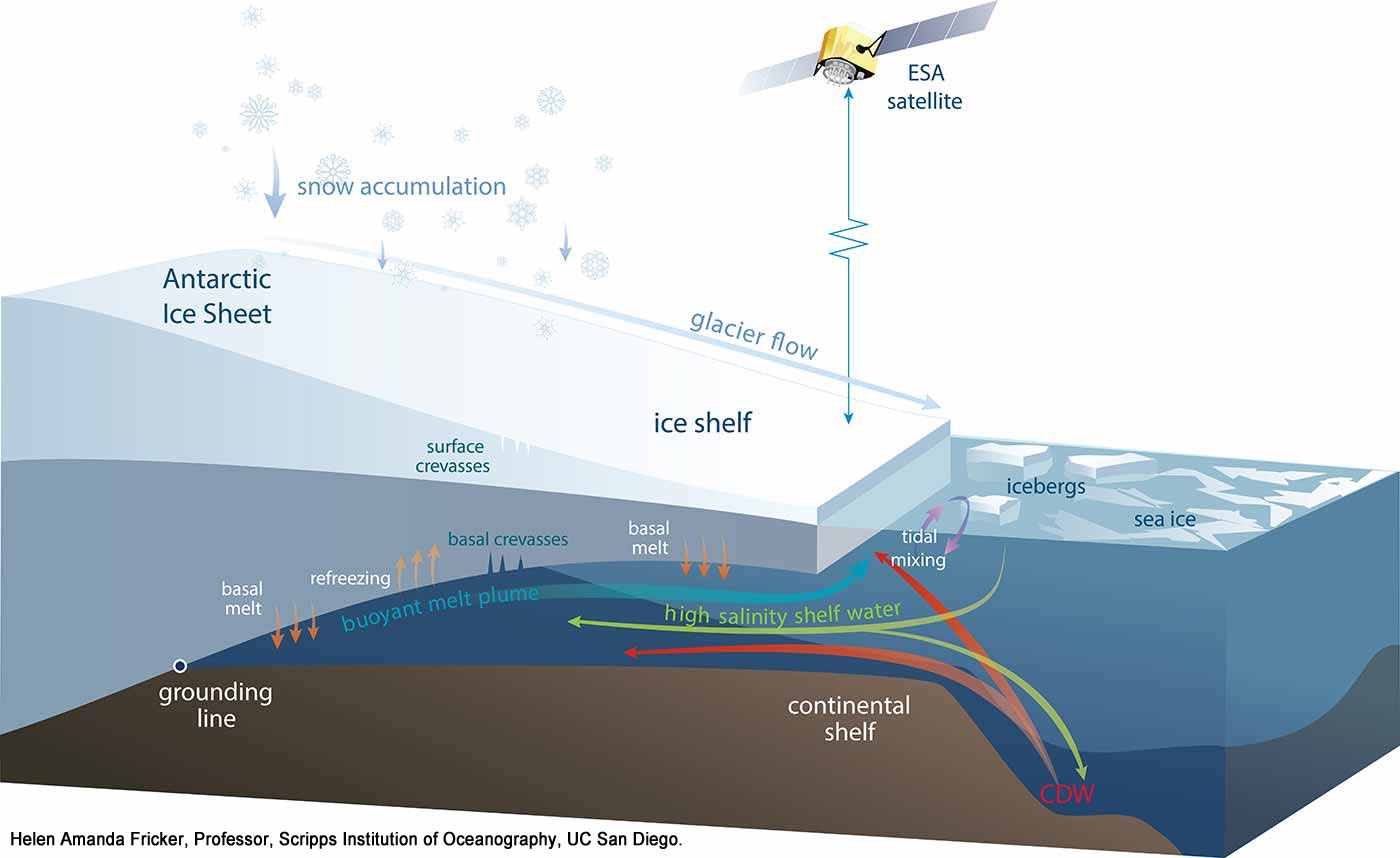 Currents driven by melt beneath floating ice shelves as described by Helen Amanda Fricker, Professor, Scripps Institution of Oceanography, UC San Diego. The fresh water of basal melt from the underside of floating ice shelves is more buoyant than heavier salt water, so it floats up and out from beneath floating ice. This draws warm water in from below, enhancing the melt and creating a positive feedback that increases over time nonlinearly, with warmer water creating more melt, creating more outflow, drawing in even more warmer water to increase melt further. http://ucsdnews.ucsd.edu/pressrelease/antarctic_ice_shelves_rapidly_thinning

Not mentioned in the NYT article was discussion from NOAA in April 2016 about what can only be interpreted as an Ice Sheet Collapse Warning. Much was said in the media about this “warning” being exaggerated. In itself, a classic example of the fairness bias; the prescient, not exaggerated, nature of this “warning” is captured in an email interview with the NOAA director (Margaret Davidson) that made the statement on Climate Crocks. The deal is, the Climate Crocks interview was headlined as “Caution: New Sea Level Story May be a Step Too Far.” These guys aren’t deniers at all but strive to bust climate myths. The headline of Climate Crocks interview belies the depth of the intrusion of Climate Change Counter Movement fairness bias journalism because what Davidson said in the interview, completely supports her interpretation that we will see in the near future, modeling of 10 feet of sea level rise by shortly after mid-century. Below is a detailed reference to this discussion from our end of year 2016 summary of some of the most important climate science of the year:

NOAA’s Ice Sheet Collapse Warning…
This is an “ostensible” ice sheet collapse warning. In other words:  being such in appearance:  plausible rather than demonstrably true or real. In an interview in the Insurance Journal in April, Margaret Davidson, NOAA’s senior advisor for coastal inundation and resilience science and services said “recent data that has been collected but has yet to be made official indicates sea levels could rise by roughly 3 meters or 9 feet [9.8 feet] by 2050-2060, far higher and quicker than current projections.” This report was widely discounted in the press and by theoretical “experts”. Davidson further explained herself in an interview in ClimateCrocks–itself with a substantially questioning title ” New Sea Level Story May be a Step too Far”. The words of Davidson have great meaning however and completely negate any attempt at discounting her statements. ClimateCrocks posted a text obtained from Margaret Davidson of NOAA to Eric Holthaus of Slate, of which the following quote (Davidson) summarizes the pertinent information: “i explained the time lag between observations/data in the field and published approved scientific consensus of peer reviewed literature can be as much as 10 years. and as before, the next approved consensus will likely see a notable uptick in slr [sea level rise] guidance (based upon field work in the period ’05-13) as it will need to have been published by 2017 when the synthesis process begins anew. I am not a scientist, but hang with them a lot. referenced recent paper by Hansen et al (which suggested 3 to 5 meters by 2100 tho Hansen has been saying 5 meters for nearly 15 years.) current work re cryosphere and mass water balance, which is a more recent area of science work. and reports regarding current field observations as mentioned and discussed by experts at various scientific mtgs on presentation rooms an corridors within past 6 months. WA [West Antarctic Ice Sheet] deteriorating rapidly… portions of shelf are now ungrounded with a lens of water underneath like Greenland but different. actually said my personal opinion was 2 to 3 meters in the next 50 years (that 2100 was not a useful frame for most people.)”
Jerger, RIMS 2016: Sea Level Rise Will Be Worse and Come Sooner, Insurance Journal, April 12, 2016.
http://www.insurancejournal.com/news/national/2016/04/12/405089.htm
ClimateCrocks.com, Peter Sinclair, Caution: New Sea Level Story May be a Step Too Far, April 21, 2016.
https://climatecrocks.com/2016/04/21/caution-new-sea-level-story-may-be-a-step-too-far/

Here is an extensive summary we did of WAIS Collapse and policy implications with an extensive literature review of the prehistoric evidence of ice sheet collapse — http://www.truth-out.org/news/item/38794-collapse-of-west-antarctic-ice-sheet-reveals-inadequacy-of-current-climate-strategies