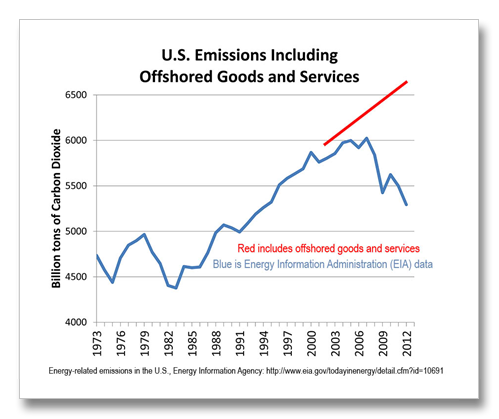 Even though global emissions are way up, US carbon dioxide emissions appear to be way down; down 16 percent since the peak in 2007. This would be good, but it’s a mirage. In 2011, 1.5 gigatons of CO2 were offshored in China (mostly) through goods produced there and shipped to the US. This leaves the US with an increasing, not decreasing, inventory in 2011. Our emissions have actually increased 11 percent since the "peak" year before the decline began in 2007.

Part of the reason that U.S. emissions appear to be falling is the fracked gas boom. Gas has replaced a lot of coal electricity over the last half dozen years and gas produces less CO2 per energy unit than coal. So our emissions fall. But our consumption of goods and services has continued to increase, and the percentage of goods and services that we produce in the U.S. continues to fall.

The understanding that American’s emissions are falling is not even close to being true. Actual emissions are some 25 to 30 percent higher than the figures put out by the IEA because the U.S. has been shifting our Made in the USA manufacturing to Made in China for so many years.

In addition, fracked gas produces three to four times more methane than conventionally produced natural gas. Most understand methane to be 25 times more potent of a greenhouse gas than CO2 and it is, in long term time frames of 100 years. But in time frames that matter of less than 20 years methane is 108 times more potent.