Increasing extreme storms are a big deal. Our civil infrastructure design is based on our old climate. Meteorologist across the country have been evaluating the historic record to see exactly how much change has already taken place. Climate modeling is still advancing towards being able to robustly understand exactly how much the most extreme storms will increase in the future, but recent increases in rainfall extremes are large. NOAA says that eight times in a little more than twelve months, six states have experienced rainfall events in excess of the 500-year storm: Louisiana, Texas, West Virginia, South Carolina, Maryland and Oklahoma. 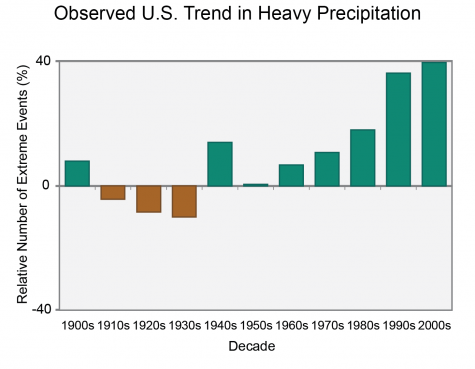 The 2-day precipitation total that is exceeded on average only once in a five-year period, also known as the five-year storm, has increased 40 percent over the 1900 to 1930 period. Climate Change Impacts in the United States, The Third National Climate Assessment, 2013, Chapter 2. http://nca2014.globalchange.gov/report/our-changing-climate/heavy-downpours-increasing

We are entering the nonlinearly increasing phase of climate change now and we have the data to see how much these “rain bomb” have already increased.

Research supported by the USDA Forest Service (Yu 2016) says that with the exception of the Pacific Northwest and Florida, all storms from 1 to 24 hours are increasing across the US with the shortest extreme storms doubling in frequency in the 30 years prior to 2013.

Work out of Duke, University of Texas, Georgia Technical Institute, and the Climate Prediction Center says that both floods and drought have doubled in the U.S. southeast in the last 30 years.

The National Climate Assessment says that the most extreme one percent of all rainfall events that happen once every five years (5-year storm) are happening 40 percent more often today compared to the 1900 to 1930 period and half of the increase has been since 1990. In Austin in 1998 this was the 5.5 inch storm. In Chicago it’s 4.2 inches. In Atlanta it’s 5.3 inches. In Pittsburgh is 3.3 inches.

In Austin, a 5.5 inch storm is a pretty big deal. All of the most frequently closed low water crossings are shut down and a lot more. There is widespread street flooding a swift-water rescues where unlucky individuals used poor judgement in plotting their automobiles through flood waters. Sometimes, even with only a five-incher, people die in their cars when they can’t see flood water at night.

The quantity of water coming out of the sky is not the only problem. These extreme storms are producing much higher rainfall rates than in our old climate. because we are a degree or two F warmer than in our old climate, the atmosphere holds about 7 percent more water. Because it is warmer, the dynamic effects of how hard it rains are increased too. Think of a pot of water on the stove. As it gets warmer, the convection currents get faster and faster as the hotter water on the bottom of the pin rises.  Big storms work the same way. And there is a feedback mechanism too, that increases the rate of rainfall even further.

As moisture condenses in a cloud, heat is released. This heat adds to the warmth of the rising air in a storm and makes it rise faster. All of these dynamic processes serve to increase the rate that rain comes out of the sky. And as we all know, the faster it comes down, the higher the creek rises.

I worked on a flood on a high-rise apartment building in downtown Austin that flooded in the Memorial Day flood in Austin in 2015. The total rainfall was similar to a five-year, 2-day storm, but it all came down in about three hours. This means it’s  about a 15 to 20-year storm, but it’s only 5 inches, and it happened when the soil was completely saturated from 10 inches of rain in May (more than twice our average May rainfall.) The resulting flood came within a foot of the 100-year storm elevation.

It’s not just that these storms are happening more often. The cookbook for rain has changed. It’s far more likely today that the same 5 inch storm will produce much more flooding than it did in our old climate because when it rains around here these days it rains often and a lot, saturating the ground more often, creating more runoff when it does rain.

Some think that continuing development causes more flooding too. This is a very logical thought, more development means more concrete, asphalt and rooftops that prevent water from soaking into the ground. But for twenty years or more, even in places with few development restrictions like Houston, new developments have been required to have stormwater flood prevention ponds. I have been a hydrologist in my other life for thirty years and very little new impervious cover does not have stormwater detention. What this mean is that regulatory authorities (Harris County, Houston, Austin, etc.) require any new building to limit the stormwater discharge from their developments to the rate that was present before the development occurred when the land was in its natural state. This includes almost all roadways except maybe about 10 percent of the largest roads like TxDOT builds. There are also regional detention ponds built by these regulatory authorities to deal with flooding from development that was not required to have detention ponds decades ago. The design criteria varies from the 25- to the 100-year storm. So when we get storms larger than the design event (25- or 100-year storm), the detention ponds fill up and overflow, creating flooding.

Our state climatologist here in Texas has done some calculations for Houston or more accurately, over a dozen official weather stations in Harris County. He looked at a significantly large storm, the 8″, 2-day rainfall. In the last 30 years, these rainfall events in Houston have doubled. This is a really serious effect of climate change and the amazing part is that it is just beginning to make itself obvious. Our climate has a tremendous amount of room for expansion of extreme events.

Not counting our recent Super El Nino, our climate has only warmed 0.74 degrees C (1.3 F.). Even with very aggressive emissions reductions of 80 percent by 2050 as President Obama pledged at the United Nations Paris Climate Conference last fall, we can expect triple our current warming by 2050 (2.4 degrees C or 4.3 degrees F). Considering that precipitation extremes are expected to increase nonlinearly with warming, we will not see just triple the increase in extreme precipitation events, the increase will be nonlinearly larger.

So, exactly how big can these extreme storms become?

One of the hydrologists’ tools is the PMP, or Possible Maximum Precipitation. The PMP is exactly as it sounds–physically, the most rainfall that could fall. It is a determination of how much rain could possibly fall if the physical conditions were perfect and temperature and humidity maxed out.  Back in 1961 the Weather Bureau did these calcs for the contiguous U.S. and this document has been an important basis for weather intensity evaluation ever since.

To help understand increasing extreme event precipitation on a warming world, and how much more extreme our weather world could plausibly become at the physical limits of the most extreme, we can evaluate current extreme events within the context of the PMP.

This is one of the great dangers of climate change. Mother Nature has a lot of headroom to develop these extreme events and our best-case scenario of emissions reductions still includes triple the warming we have already seen.

The supposed safe limit of climate change (it is not) has long been suggested to be 2 degrees C (3.6 degrees F) or nearly three times as much warming that we have already seen. The 2 degree C warming threshold to dangerous climate change was set literally 25 years ago in the founding documents of the United Nations Framework Convention on Climate Change (the parent organization for the Intergovernmental Panel on Climate Change) at the Rio Earth Summit in 1991. The IPCC, just last year at Paris, announced that the dangerous threshold should be 1.5 degrees C or less, or double current warming. Can we afford to see flooding  increase even more, when the increase of precipitation extremes per degree of warming will likely be much more radical than the increases we have already seen?

In Austin on Halloween last year, we had another unprecedented flood on Onion Creek in the Southeast part of town. I say another because on Halloween in 2013 we had a record-setting flood on the same creek that flooded thousands of homes. This flood too, flooded thousands of homes, some never before flooded, in slightly different areas. The City of Austin hydrology program calculated the “return period” for this 2015 storm, or the bulls-eyes of heavy rain produced by this storm. The “return period” is how often the storm occurs: for the 100-year storm, the return period is on average once in a hundred years, or technically, a one percent change of happening in any year.

The city says there the three major bulls-eyes to this event, were measured at 11 to 13 inches of rain each. These events were calculated to be the 1700-year, 1900-year and 2300-year storms. You can see an interview on the subject here.

Considering the PMP for Austin is 31 inches, that we could possibly see 31 inches of rain in 6 hours all things being maximized, can we afford to triple our current warming when we are already seeing 2,000-year storms? This is not to say we will see PMP storms but it illustrates the risk.

The following is the abstract from Lehmann and Coumou 2015. I have included this discussion because it is very telling seeing the words of the climate scientists themselves:

Floods and drought have doubled in the U.S. southeast in the last 30 years:
Li, et. al., Changes to the North Atlantic Subtropical High and Its Role in the Intensification of Summer Rainfall Variability in the Southeastern United States, Journal of Climate, October 2010, abstract.
http://journals.ametsoc.org/doi/pdf/10.1175/2010JCLI3829.1