Over the years I have been watching the reports reporting how sea level rise slowly increasing. Slowly however is a misnomer. Sea level rise has rapidly increased since about 1990. The papers tell the story. 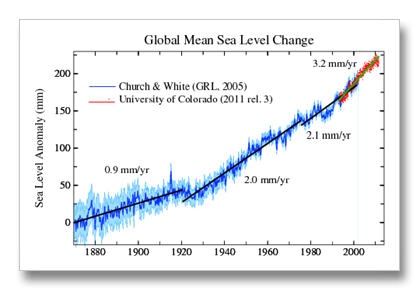 Over the past four or five years the reports from Greenland and Antarctica have shown melt and iceberg discharge increasing rapidly. Antarctica was not even supposed to be losing ice until the 22nd century according to the IPCC, but now it has caught up with ice loss from Greenland.

All the while, our beaches and coastal wetlands are sweating bullets. the US Global Change Research Program’s report in 2008 telling us that our barrier islands and wetlands will begin to disintegrate and disappear when sea level rise reaches 7 mm per year has been looming precariously in the near future.

New findings about the collapse of the West Antarctic ice sheet the last time Earth was within about 1 degree C of being as warm as it is today, about 120,000 years ago, saw sea level rise 30 mm per year for centuries on end. 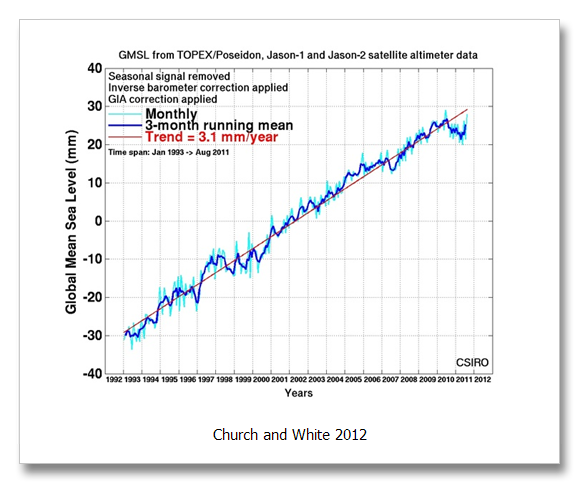 Assessments of the impacts of climate change tell us that our society can adapt to sea level rise of no more than about one foot per century. The reason is the vast infrastructure lying within feet of sea level that has been constructed over generations.

Today the most detailed evaluations of sea level rise yet are being published. Church and White’s latest contribution however has a twist. it appears to be a linear trend in sea level rise beginning about 1990. the rate is 3.1 mm per year, but this rate is not averaged. It fits a straight line trend. this is very odd considering the increase in melt from mountain glaciers, Greenland and Antarctica.

Why is sea level rise not following an exponential trend like temperature and ice discharge? The most likely answer is “I have no idea.” thinking about the water cycle though, the amount of water remains constant. as temperature rises though, more water can be held in the air. Too, as our society grows, more water is taken out of the ground. this water ends up in our rivers or the sky and becomes a part of the water cycle, it should increase sea level rise.

But we have to subtract the amount of water impounded from new reservoirs. Our society has yet to stop building dams. these dams are a significant amount of capture, equal to a share of “negative” sea level rise. Altogether however these pluses and minuses, intuitively, should still be causing an exponential rise, not a linear rise.

The contribution from mountain glaciers is supposed to be diminishing, is this happening and is it happening in a strong enough way to offset the increase in rise from Greenland and Antarctica?

Is our society at a peculiar crossroads where environmentally increasing variables are nearly exactly matched by society’s increasing population and manipulation of resources? Our aerosol emissions are increasing so rapidly that they are masking more than half of our current warming. It could certainly be possible that we have temporarily locked up the missing sea level rise in new reservoirs, or increased storage in the atmosphere because of the capacity of warmer air to hold more water.

So what is the answer? No-one knows as of yet, but I bet it will not be long until we find out.