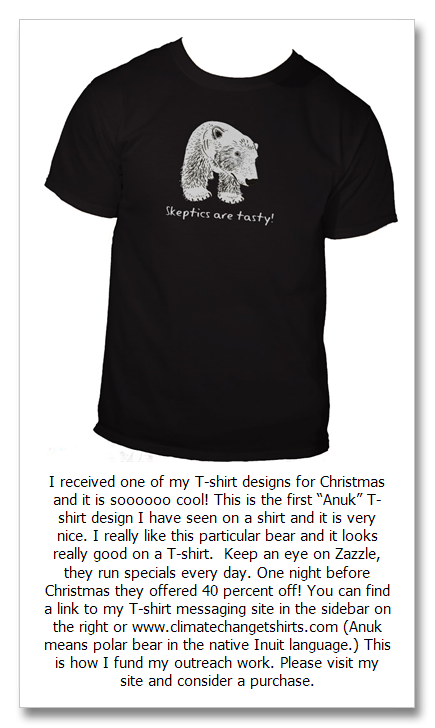 In an announcement of its latest Energy Poll results, the University of Texas Business School said that the increased agreement that climate change is happening was most notable in a group of Southern states, including Texas. The report states:

This increase occurred across all political parties (Republicans, Democrats, Libertarians, and independent voters) with the greatest change notable in the southern states (57 percent to 71 percent).

This dramatic jump happened between March 2012 and September 2012 and is a 25 percent increase! The December 14 AP-GFK Poll shows an even bigger change, but from 2009, only this change is among climate change skeptics:

The biggest change in the polling is among people who trust scientists only a little or not at all. About 1 in 3 of the people surveyed fell into that category. Within that highly skeptical group, 61 percent now say temperatures have been rising over the past 100 years. That’s a substantial increase from 2009, when the AP-GfK poll found that only 47 percent of those with little or no trust in scientists believed the world was getting warmer.

Considering the history of opinion polls on climate change these shifts are huge and in the UT Energy Poll for southern state opinions, this six-month change is simply phenomenal… ‘Bout time.

From my article “The Biggest Misunderstanding in Climate Science” (linked below as well) we will see 14.4 degrees F of warming across most of the interior of the U.S. by just 2050. It goes up to an Earth shattering 22 degrees by 2100, but this could be reduced somewhat if action ever begins. Much of the 14.4 degrees of warming however is pretty much locked in because of the short climate time frames involved. There are two reasons for such a drastic difference between this 14.4 or more degrees of warming and what most of us have come to understand will be just 2 to 3 degrees C (3.6 to 5.4 degrees F) of warming by 2100.

The first is the Kyoto mindset. For nearly 20 years we have all come to understand that with modest reductions of climate change pollutant emissions, warming will remain at or below the level that is considered “dangerous climate change” of 2 degrees C. The Kyoto protocol, which only the United States, Afghanistan and Sudan did not sign, required that the United States reduce annual emissions 7 percent below 1990 levels by 2012. This is approximately the level of emissions in November of 1987. Instead of reducing annual emissions across the planet, total emissions since 1987 have increased 81 percent. The numbers for “total” greenhouse gas emissions are even more sobering. Since 1984 we have doubled the total amount of CO2 emissions since record keeping began in 1751. In just 28 years we emitted as many greenhouse gas pollutants as we emitted in the previous 236 years. Data is from the World Resource Institute’s Climate Analysis Indicator Tool up to 2010.

So today, instead of being on track to a future world free of dangerous climate change, we are on the worst-case scenario path imagined by the Intergovernmental Panel on Climate Change. And as the “Biggest Misunderstanding” explains, warming across most large land masses (continents) will be twice or more what it is over water because of the great cooling effect of cool ocean waters. This is where we get the tremendous difference between the 2 to 3 degrees of average planet-wide warming by 2100 that is commonly understood and the 14.4 degrees F by 2050 that is most likely to happen. The average planet-wide warming is all warming over land and cool ocean waters.

As for Central Texas, we are on the edge of the great warming over land because we are located fairly close to the Gulf of Mexico. Most of the rest of Texas is farther away from the Gulf, so more warming is likely over most of the rest of Texas–And this is where we get our water. This is where our rivers come from so our future water supply will be significant changed because of much, much warmer temperatures.

There is a compounding factor that affects water supply on a warmer planet and we are seeing this happen in the Rockies right now and even in Texas we could be seeing it happening right now as well. This compounding factor is evaporation. The relationship between evaporation and warming is not linear. It is an exponential relationship like a population explosion. A little warming means a lot more evaporation. What we are seeing in the Rockies with the great pine beetle pandemic impacting 64 million acres of forest is being perpetuated by drought when meteorologically, the decade long drought ended in the Rockies shortly after the turn of the century. The temperature has warmed twice or more the global average in the Rockies, meaning that the warm season and evaporation have significantly increased. This is allowing the perceived drought–the water stress on the forests–to continue, which enhances the pine beetles’ impact killing even more trees.

In Texas, we are definitively entering the fourth phase of our current drought with two major areas of exceptional drought showing up on the Drought Monitor in the last few months. But 2012 saw average rain across Central Texas. In fact, over a little more than the last decade, average annual rainfall in Austin has increased 7 percent. Average annual rainfall here before the turn of the century was 32 inches and it had been about 32 inches for generations. Now it is 33.5 inches, yet the worst drought ever recorded continues.

Climate change is actually far, far worse than is commonly understood and the main reason is that we did not begin to reduce emissions as some of the smartest people in the world suggested prudent nearly 20 years ago. In the same thought, those voices of the fossil fuel industrial complex that continue to tell us that the solutions to climate change will ruin our economies–these are the same voices that tell us that climate change is not real, that it is a grand scientific conspiracy or that it will be good for mankind. These are some very confused voices.