Thanks to the Radical Climate Skeptics

The latest Pew Center poll shows an extraordinary change in public understanding.  It’s like two decades of climate science has been flushed down the toilet.  All of a sudden, 14% of Americans have decided that what they understood last spring is now hooey. Those in the U.S. who choose not to believe in science are virtually in a dead heat with those who understand the climate crisis. 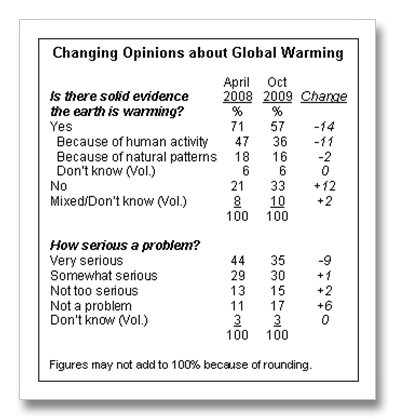 It’s valid because what I said about Letterman’s audiences is likely very true.  The vast majority of Americans would never get close to the Ed Sullivan theater.  It is likely that the audience is skewed towards the progressives.  Unfortunately.

America is being fooled by the contrarian propaganda – for too many reasons to count in anything short of four chapters. The results, as you have seen from the recent scientific findings highlighted in this journal of discovery, will only make mitigating the climate crisis even more profoundly difficult.

The forest of our planet are showing frightening symptoms of a changing climate. And what the scientists are not telling us that when our climate warms by ten degrees, most forests will not survive, and most will not grow back in any form that is anywhere similar to what was there before. The warming in the mountains will be greater and the forests of the Rocky Mountains will likely disappear altogether. At least they will not survive in the timeframes that are given.  It takes centuries for ecosystems to shift without trouble.

Fifty two million acres of trees are dead in North America because of climate change enhanced insect infestation. This is somewhere between 21 billion and 26 billion trees. Last year alone, 8 billion trees died (18 million acres). The previous record breaking insect infestation was 3 million acres and it took the beetles ten years to kill that many trees. The scientists say there is not reason for the infestation to stop as it takes extremely cold weather to kill the bugs – cold like we have not seen in more than a decade and like we may never see again.

The number of animals that have died because of this infestation is at least equal to the the 21 billion to 26 billion trees that have been killed. The forest of our planet will become carbon sources instead of carbon sinks. A solid one-third of the CO2 on this plate is naturally sequestered by trees.  The airborne fraction of CO2 that causes warming will increase by an amount equal to the emissions from over 2 billion people.

The USGS says our barrier islands and coastal wetlands will begin permanently disappearing when sea level rise reaches 7 mm per year. At the current rate it is rising, it will reach 7 mm per year somewhere between 2015 and 2020. Between 2004 and 2006 alone sea level rise increased from 3.3 mm to 3.7 mm per year.  This a 6% annual increase.

There are 405 barrier islands on the Atlantic and Gulf Coasts of the US totaling over 3,000 miles in length. There are 5.3 million acres of coastal wetlands. The USGS does not know how long it will take sea level rise to destroy the barrier islands and wetlands, but given the high risk from hurricanes, once the destruction begins, it will likely not take long for it to be complete.  The loss of life in these massive ecosystems will be uncountable.

The risk to you and me from just these few globally important climate events is extreme beyond ex more of America that the hard won scientific findings are hooey.

I fear I must return to debunking the same moldy contrarian myths. There is little enough time.