From Drexel  and Stanford Universities: 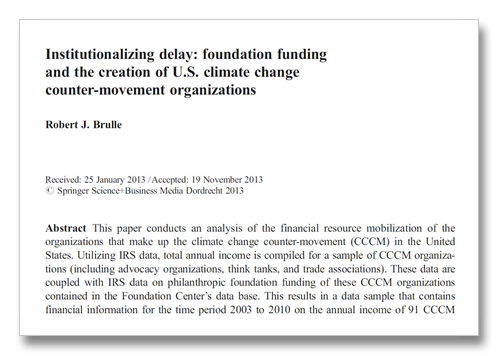 “The climate change counter-movement has had a real political and ecological impact on the failure of the world to act on the issue of global warming … Like a play on Broadway, the counter-movement has stars in the spotlight – often prominent contrarian scientists or conservative politicians – but behind the stars is an organizational structure of directors, script writers and producers, in the form of conservative foundations. If you want to understand what’s driving this movement, you have to look at what’s going on behind the scenes.”  The above is from Professor of Sociology and Environmental Science Robert Brulle at Drexler University and the press release for his research findings in the journal Climatic Change — Institutionalizing delay: foundation funding and the creation of U.S. climate change counter-movement organizations, December 21, 2013.

Fear of extinction has created a twenty year-long campaign by the wealthiest vested interests in the world. This campaign seeks to delay or even stop urgent measures needed to control climate pollution. A U.S. National Research Council Report from 2011 says there is a “A deliberate and organized effort to misdirect the public
discussion and distort the public’s understanding of climate change.” Brulle identifies the start of the movement in 1989, just after the formation of the Intergovernmental Panel on Climate Change. This new research has looked at what is now being called the Counter Climate Change-Movement (CCCM) and just exactly how much money these CCCM entities are pouring into the “movement.” This research tells us that:

“It is without question that conservative foundations play a major role in the creation and maintenance of the CCCM. All of the available information illustrates strong links between these
foundations and organizations in the CCCM, even despite efforts such as the creation of Donors Trust/Capital to conceal these funding flows.”

“As for the organizational makeup of the CCCM, a variety of descriptions can be found in the existing literature. Common to all of these descriptions is the inclusion of for-profit corporations and their allied trade associations, conservative think tanks, advocacy/front groups, and foundations. The different counter-movement organizations are aided in their work by sympathetic media outlets and the Republican and Tea Parties. To develop a comprehensive roster of CCCM organizations for this study, a two-step process was used. First, a consolidated list of all of the organizations identified in prior studies was created. These organizations were then individually examined to identify those that had a substantive focus on climate change. This process identified 118 CCCM organizations … The efforts of the CCCM span a wide range of activities, including political lobbying, contributions to political candidates, and a large number of communication and media efforts that aim at undermining climate science.”

This work looks at 118 CCCM organizations funded by 140 foundations that have been identified in the academic literature as participating in the climate change counter-movement. Brulle looked at IRS records from the National Center for Charitable Statistics and the Foundation Center. Records for 91 Conservative foundations and think tanks funded by 140 foundations were found. A total of 5,299 grants totaling $558 million were made between 2003 and 2010. This traceable funding however only amounts to an annual averaging $69 million per year.

A disturbing trend identified by Brulle is that the traditional largest donors, Exxon Mobile and the Koch Brothers, have seen their traceable donation dwindle to almost nothing after public campaigns by the Union of Concerned Scientists and Greenpeace to publicize their contributions to anti-climate science efforts.

These donors are now using donor trusts to distribute their wealth. These financial contribution mechanisms allow them to participate anonymously and have their contributions funneled to the foundation or institution of their choice by the donor foundation.

The means that these organizations use to confuse and defeat the discussion about climate with nearly a billion dollars a year are many. Working to elect Conservative lawmakers is their main focus but their efforts are much broader. They create propaganda in the form of media messages that tell us climate science is not certain and they contribute to scientific research attempting to discredit previous research showing the robustness of climate science. Much more insidious are the television, radio and print advertisements created for “the good” of the fossil fuel industrial complex. The families, babies and patriots shown in these commercials supporting the business as usual operation of our society, in situations dear to any breathing human, are all nested securely in a perfect world supported by fossil fuels. No doubt, our world is the fabulous place that it is because of fossil fuels and doing without them, in time frames that matter to climate change, is proving impossible. But treating the pollution from the burning of fossil fuels is not. Because of the long life of carbon dioxide this pollution has been building in our sky for centuries.

The invisible threat in all the efforts to obfuscate, or to otherwise promote fossil fuels is the colorless and nearly indestructible gas carbon dioxide. Once, we did not know of the grave threat to humanity caused by this seemingly innocuous form of pollution that is a fundamental requirement for life on this planet. But that time has passed. We now know without doubt that a small increase in atmospheric CO2 changes the delicate climate balance of our planetary ecosystems radically. Moving our society to a cleaner form of energy will certainly happen organically as economics dictate. But moving our society to mitigate for literally centuries of pollution while this energy generation switch occurs is another matter.

The paper concludes: “To accomplish this goal in the face of massive scientific evidence of anthropogenic climate change has meant the development of an active campaign to manipulate and mislead the public over the nature of climate science and the threat posed by climate change.”

The CCCM has even poisoned their own well. The latest research is pointing ever more towards simple removal of carbon dioxide from our atmosphere as an economically viable solution to climate pollution. Because of the great authority of this $7 billion umbrella however, scientific knowledge revealing the facts around what is becoming known as “air capture” has been defeated through obfuscation even in environmental advocacy circles.

The CCCM has completely destroyed the ability of climate science to have a functional outreach component. The National Academy of Engineering, which is a part of the National Academies of Science, in their annual 2012 symposium report tells us that this $7 billion umbrella is about the same as the total federal research into Carbon Capture and Sequestration (CCS) from coal generating power plants. The main reasons why air capture isn’t implemented already is that only $300,000 in federal research has been done on air capture.

Air Capture Research: “Almost $7 billion federal dollars have been spent on research and development on methods to capture carbon from flue gas. The total federal investment for CO2 capture from air may be as little as $300,000.”
Jones, Removing Carbon Dioxide from the Atmosphere: Possibilities and Challenges of Air Capture, page 13, Frontiers of Engineering, National Academy of Engineering Symposium 2012, National Academy of Sciences. page 16, fourth paragraph.
http://www.nap.edu/openbook.php?record_id=18185&page=13