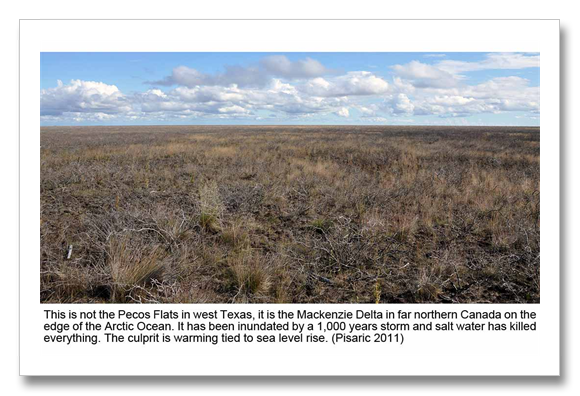 The Queens University press release announces that they and Carleton Universities have completed research that has, as the press release states "…uncovered startling new evidence of the destructive impact of global climate change on North America’s largest Arctic delta." The study looked at a storm surge during the summer of 1999 that created a widespread die-off of nearly all vegetation in a large area of the Mackenzie Delta in far northern Canada on the shores of the Arctic Ocean.

The scientists involved in the study looked at growth rings from the dwarf arctic alders (shrubs) and sediments from the prolific ponds that dot the Mackenzie Delta wetlands. The storm surge killed about half of the shrubs outright and an additional 37 percent were died over the next four years. A decade later, soils in the affected delta area were still so impregnated with salt that recovery was still not taking place.

But dwarf arctic shrubs can only be dated back about 80 years. The remainder of the study looked at the sediments in those abundant arctic wetland pools. These sediment layers in these permanent pools can be analyzed for a thousand years back into the past. How this is done is through looking at the microscopic skeletons of single and multi-celled diatoms that lived in eh pools. There are distinct differences between salt water species and freshwater species (of diatoms.) The 1999 storm surge marked a distinct delineation of sediments with only fresh water diatoms to pools populated only with only salt water species. This means that clearly this event was unprecedented in 1,000 years.

from Science Daily "By studying growth rings from coastal shrubs and lake sediments in the Mackenzie Delta region of the Northwest Territories — the scene of a widespread and ecologically destructive storm surge in 1999 — the researchers have discovered that the impact of these salt-water surges is unprecedented in the 1,000-year history of the lake."

University of Queen’s biology professor and team member John Smol "Our findings show this is ecologically unprecedented over the last millennium." Team co-leader Michael Pisaric said "This had been predicted by all the models and now we have empirical evidence."  The most striking bit of discussion though comes from the abstract to the paper published in the Proceedings of the National Academy of Sciences: 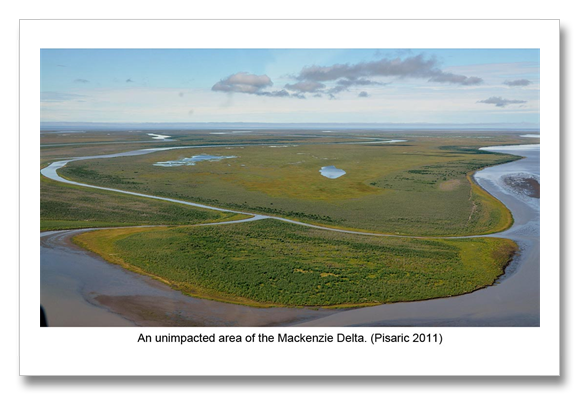 "One of the most ominous predictions related to recent climatic warming is that low-lying coastal environments will be inundated by higher sea levels. The threat is especially acute in polar regions because reductions in extent and duration of sea ice cover increase the risk of storm surge occurrence. [Sea ice eliminates wind driven waves that are a large part of storm surge impacts.] The Mackenzie Delta of northwest Canada is an ecologically significant ecosystem adapted to freshwater flooding during spring breakup. Marine storm surges during the open-water season, which move saltwater into the delta, can have major impacts on terrestrial and aquatic systems. We examined growth rings of alder shrubs (Alnus viridis subsp. fruticosa) and diatoms preserved in dated lake sediment cores to show that a recent marine storm surge in 1999 caused widespread ecological changes across a broad extent of the outer Mackenzie Delta. For example, diatom assemblages record a striking shift from freshwater to brackish species following the inundation event. What is of particular significance is that the magnitude of this recent ecological impact is unmatched over the [greater than] 1,000-year history of this lake ecosystem. We infer that no biological recovery has occurred in this lake, while large areas of terrestrial vegetation remain dramatically altered over a decade later, suggesting that these systems may be on a new ecological trajectory. As climate continues to warm and sea ice declines, similar changes will likely be repeated in other coastal areas of the circumpolar Arctic. Given the magnitude of ecological changes recorded in this study, such impacts may prove to be long lasting or possibly irreversible."

The PNAS paper concludes "As the Arctic warms, sea levels rise, ice cover declines, and the length of the open water season increases, the likelihood and potential impacts of storm surges will be exacerbated in low-lying Arctic coastal environments (3). These changes will impact not only the ecological integrity of Arctic coastal systems, but also the infrastructure and economies of many Arctic coastal communities."  and the press release concludes “The Arctic is on the front line of climate change. It’s a bellwether of things to come: what affects the Arctic eventually will affect us all.”