Scientists have known for a long time that our Earth has been cooling naturally since the last thermal maximum about 7,000 years ago. At least intuitively, from all of their paleoclimate knowledge, our climate should be following the normal pattern of astronomical cycles. These natural cycles say that Earth should have been cooling for quite some time now. 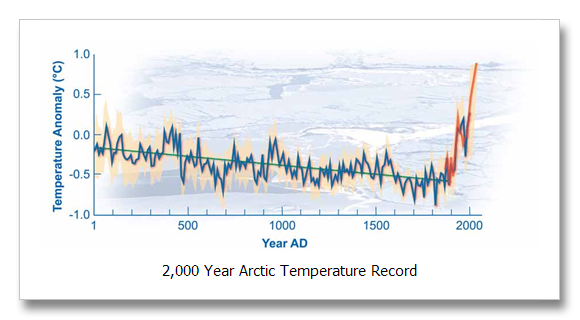 This is one reason why science literature is littered with descriptors such as "could be" "likely" "possible", "may", "might" and "could" instead of "is", "are", "did", "was", "actual", "absolute" and exact". The general public doesn’t understand this and when they see the ambiguous wording in reporting of new discoveries, they are skeptical about the validity of the science.  Before this study, only bits and pieces of facts existed that showed what scientists have know "circumstantially" for more than a century.

This rigorous new study of Arctic temperature research has assembled enough facts to go beyond circumstantial evidence in the understanding of Arctic temperatures over the last 2,000 years. It looks at algae concentrations, pollen counts and species distribution in lake sediments, sediment thickness and composition and glacial ice and tree rings in the Arctic. The results of the study confirm a widespread disruption of a 1900 year-long cooling trend in the Arctic that has happened since 1900. (The cooling trend obviously goes back to the thermal maximum 7,000 years ago, but this particular science ca not say that without invoking circumstantial evidence, so it goes unsaid.) Natural orbital cycles should have caused a gradual cooling of Earth since about 7,000 years ago at the last celestial thermal maximum. This was when the earth was closest to the sun and the tilt of the earth’s axis was such that the northern hemisphere was closest to the sun. These situations on occur every 21,000 years and when they do, Heating on Earth it’s greatest point in that 21,000 year-long cycle.

We did see this happen in reality and then for 7,000 years Earth cooled. This cooling of about 0.2 degrees C  per 1,000 years continued up until about 1900 when there was an abrupt warming of 1.4 degrees C (2.5 degrees F). This is the average warmth across the Arctic, some places have warmed much more like northwestern Canada and north central Siberia.

The authors identify the warming as being entirely man-caused  from increased greenhouse gas emissions. Otherwise our planet would be cooling now because of the 21,000 year solar astronomical cycles.