2009 Claims of coldest winter in a Century? 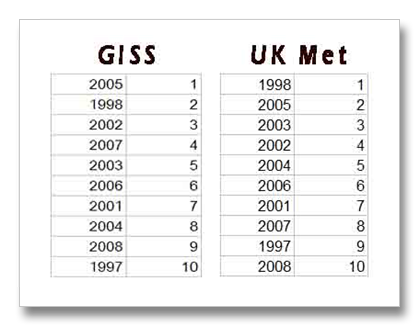 These reporter are criminal. They influence people who do not know better. Yep, the last time a global average winter was as cold as this one was in a different century all right, I guess to some people that means coldest in a century. These contrarians Blogs are frustrating, because I know a lot of people believe them, and it doesn’t matter how stupid they are (the blogs or the people who believe them)– people are influenced unfairly. La Nina and the biggest sunspot minimum in 60 years have come together to create the coldest year in 10 years, not 100.  Here’s the GISS ands UK Met Ranks: