A Strong Bout of Natural Cooling in 2008 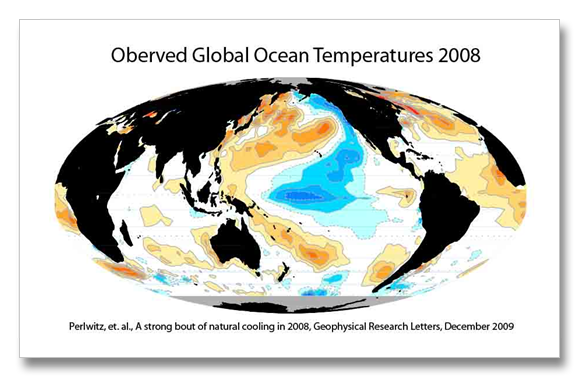 The authors make it clear that 2008 was a year that reflected strong cooling across North America but not unusual in the least, at least from a climatological standpoint.  Many people out there, including many weather people on television seem to think there is something special about the relatively cold temperatures that we are having. What is special is that planetary warming has lifted our climate out of its old normals. Across much of the country it has been a decade since we have seen this kind of cold, but that doesn’t mean that before a decade ago, this type of weather wasn’t normal, because it was.  The great concern of the authors of this paper was that climate skeptics are using the cooling to declare that climate change is not real. The average contiguous U.S. temperature for 2008 was 0.2 degrees above the 1900 to 2000 average.  Globally, 2008 tied with 2001 for the eighth warmest year ever recorded. They repeatedly said that 2008 was completely within the natural variability of climate and that in a year or two the U.S. would return to record heat.

The study looked at several models and actual conditions. What they found was that La Nina and the Pacific Decadal Oscillation were responsible for the cooling in North America (see here).  Of course we all knew this all along, but Perlwitz et. al., proved it with models and statistics. The most amazing news however was that temperatures in the Equatorial Pacific were actually the

coldest in the instrument record.. Here is a quote from the paper: "Our appraisal of the natural SST conditions in the Nino 4 region, with anomalies of about 1.1 K suggests a condition colder than any in the instrumental record since 1871. We illustrated that North America would have experienced considerably colder temperatures just due to the impact of such natural ocean variability alone, and that the simultaneous presence of anthropogenic warming reduced the severity of cooling."

The authors complete their publication with this caution: "This, and similar recent attribution studies of observed climate events [Stott et al., 2004; Hoerling et al., 2007; Easterling and Wehner, 2009] are important in ensuring that natural variability, when occurring, is not misunderstood to indicate that climate change is either not happening or that it is happening more intensely than the true human influence. In our diagnosis of 2008, the absence of North American warming was shown not to be evidence for an absence of anthropogenic forcing, but only that the impact of the latter was balanced by strong natural cooling. Considering the nature of both the 2008 NA temperature anomalies and the natural ocean variability that reflected a transitory interannual condition, we can expect that the 2008 coolness is unlikely to be part of a prolonged cooling trend in NA temperature in future years."