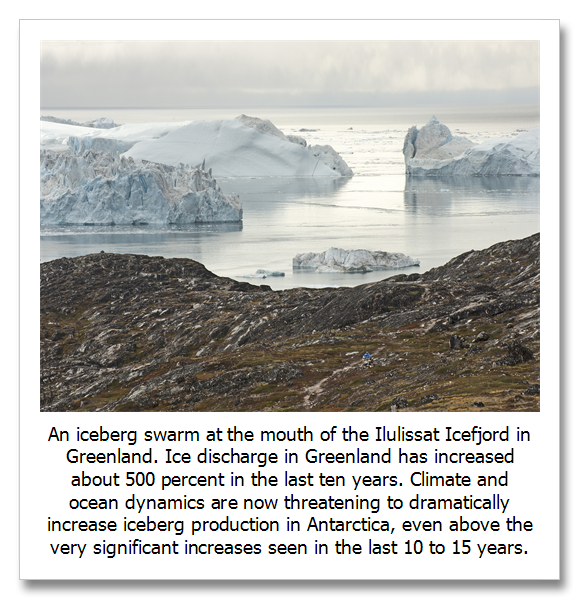 Our previous understanding of how the Antarctic Ice Sheet responded to warming at the end of the last ice age 10 to 20 thousand years ago was based on only a few ocean sediment cores. From sediment cores in the North Atlantic we have been able to piece together a decent map of how and when the great ice sheet over Canada and parts of the northern U.S. and the Greenland Ice Sheet collapsed when we warmed from the depths of the last ice age. Now we can do this with these new Antarctic sediment cores.

What has been found is that Antarctica may be closer to the same type of reaction to warming as occurred the last time sea level and temperature rose to the levels they are today, or will be in the very near future.

The evidence comes from what is known as iceberg-rafted debris (IBRD). These IBRD consist of soil, sand, rocks and gravel that were picked up by the ice sheet and carried out to see in icebergs. When the icebergs melted, the debris sank to the ocean floor.

When Ice sheets collapse, they release countless icebergs that float off and away. In the North Atlantic, IBRD can form layers feet thick and even as far away as the Atlantic near the British Islands inches of IBRD are found in sediment layers during these collapse events.

The cores are dated by comparing dust from known ice cores. The dust composition of our planet changes with climate. Colder times are drier and dustier, but more importantly, the dust has a different composition as it comes from different places.

The new cores show collapse began about 20,000 years ago corresponding to global warming after the last ice age caused by the earth’s changing tilt and orbit around the sun, then abruptly ended 15,700 years ago. This period is known as the Younger Dryas in the Northern hemisphere and it was caused by significant collapse of the North American Ice Sheet.

So much ice, and therefor fresh water, entered the North Atlantic during this period that it shut down the gulf Stream and created massive cooling that plunged Earth back into the ice age.

The importance of this research is that during this last pulse, evidence from the Ross Sea suggests the West Antarctic Ice Sheet retreated from the grounding line. About 6,000 to 7,000 years ago Earth reached its peak post-glacial temperature, known as the Thermal Maximum. Since then, global climate  cooled a few degrees and the West Antarctic Ice Sheet reconnected with the grounding line.

In the last 150 years however, Earth has warmed rapidly to a temperature greater than it was at the Thermal Maximum, and most of that warming has occurred in the last 20 years.

In the last few years we have evidence that the ice has retreated beyond the grounding line again. This grounding line is most important at the West Antarctic Ice Sheet. Across much of Antarctica, the ice sheet has depressed the earth’s crust by hundreds to thousands of feet. The depression is based on weight with the deepest ice towards the center of Antarctic depressing the crust the most. This has left a high ridge around the perimeter of the Antarctica that serves to hold back the ice and decrease it’s flow into the ocean.

The effect is most pronounced in the Ross and Wedel Ice Sheets in a Mexico sized area where the bottom of the ice is up to 5,000 to 6,000 feet below sea level. This pinning points reduce ice flow as much as three hundred percent (Favier and Pattyn 2015).

These grounding points have previously helped to stabilize the ice sheet, by physically holding back interior ice. Now that the ice has melted up off of the grounding point, conditions are similar to those during the last Antarctic iceberg pulse about 9,000 years ago.

Oceans conditions today are also similar to then. Sea level is about the same except it is rising rapidly now, and fresh water from melt and increased iceberg discharge have formed a freshwater cap around the continent that floats on the denser salt water allowing more sea ice to form. More sea ice and the freshwater cap is decreasing the formation of bottom water by interrupting southern ocean currents and mid level waters are increasing in temperature creating more underice melt and destabilizing the floatation portion of the ice sheet.