Antarctic Melt Increases While the Ozone Hole Keeps it Cool

What was once widely regarded as being stable for at least the next century has already started to melt and at the least will contribute 4.5 feet to the IPCC sea level rise prediction.  The 22 inches from the IPCC and additional melting identified as coming from Greenland put us up in the ten foot zone now (here and here).  And these sea level rise guys always, and I mean always say "at the minimum". The sea level rise scientists are some of the most conservative of the climate scientists that I have read. This is an immense report that summarizes the last decade’s research on Antarctica. One of the new findings they highlight is a new analysis of why temperatures have remained relatively the same in Antarctica while the rest of the planet sees continued warming. 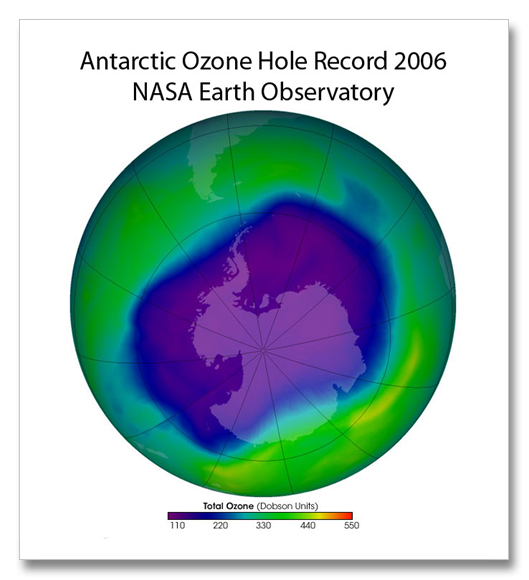 And by the way, the reason why Antarctic has started melting 100 years ahead of schedule, when temperatures have only slightly warmed and remain far below freezing across the vast majority of the continent – is a warming ocean. Much of the ice in Antarctica comes in direct contact with the Great Southern Ocean along the margins of the great ice sheet, and this is where much of the melt is taking place. The ocean is warming, but more than that, ocean currents in the far south are changing, bringing even warmer water into contact with some areas of Antarctica.

The reason why Antarctica has escaped much of the warming that has happened across the rest of the planet is the ozone hole. There are numerous reports that show that the Montreal Protocol is working, that we are gaining control over our stratospheric ozone depletion problem. But the Antarctic ozone hole remains.

The chart on the right shows thirty years of ozone holes, beginning when there was no ozone hole. What happened is an abrupt environmental change occurred, much like what is happening with greenhouse gases now. Our Earth’s environment can take only so much abuse, then, like any environment pushed to the edge, it leaps to a new equilibrium.

Mankind almost lost the ozone layer, the consequences of which would have been catastrophic for the planet. At the time, scientists were reporting a gradual 50% decline in stratospheric ozone over the next hundred or more years if nothing was done to stop ozone depletion.  But an ugly surprise popped up in the mid 80s. An unexpected runaway chemical reaction in the atmosphere ( a positive feedback…) created a massive ozone depletion zone over Antarctica. By 1987 the inhabitants of this planet had come to understand the grave danger and the Montreal Protocol was drafted, regulating ozone depleting substances.

Twenty two years later the ozone hole is as big as ever. There are many signs that ozone depleting chemicals are under control, yet the hole remains. The NASA image on the right shows the record largest hole from 2006.

Why is this happening?  It is a process that has been anticipated in the climate models at some point in the distant future. The way the ozone hole forms is that these crazy nitric acid clouds (natural) form in the ultra cold Antarctic winter at elevations way, way above any clouds found on the planet. The nitric acid combines with ozone depleting chemicals and when the sun returns in the spring, ultraviolet light triggers a chain reaction that zaps the extra oxygen off of the ozone molecule turning it into plain old oxygen.

The nitric acid clouds, called necreotic clouds, are natural, and have been around since time began, but these man-made ozone depleting chemicals have not been around – they are entirely foreign to our natural world.

What the climate models say about the future of stratospheric ozone is that global warming will cool the stratosphere – this is already happening.  the blanket of greenhouse gases does not allow as much heat from the earth to radiate back into space where some can be trapped in the stratosphere, so the stratosphere gets cooler, even as the lower atmosphere (the troposphere) gets warmer.  The necreotic clouds can only form at the very coldest part of the Antarctic winter. One of the things that makes polar winters so cold is the atmosphere is thinner over the poles. In the winter, the cold air at the surface of the poles contracts and allows the atmosphere to thin even more. This means that the stratosphere gets closer to the surface. This allows a greater mixing between the lower stratosphere and the upper troposphere, that makes it even colder in the upper atmosphere of the polar regions. Which means more nitric acid clouds, and more ozone depleting chemical reactions with any of the other ozone depleting chemicals, doesn’t matter. 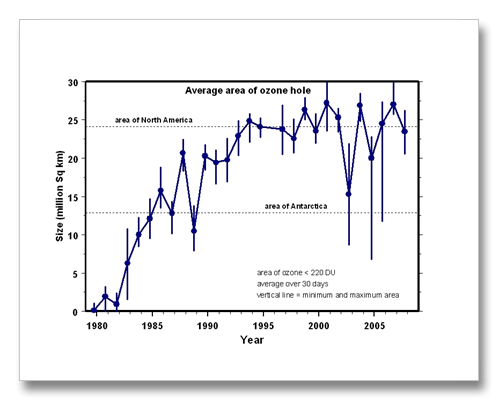 So, once again, our climate is ahead of the computer models, climate change is happening faster, or the computers are too conservative or both.