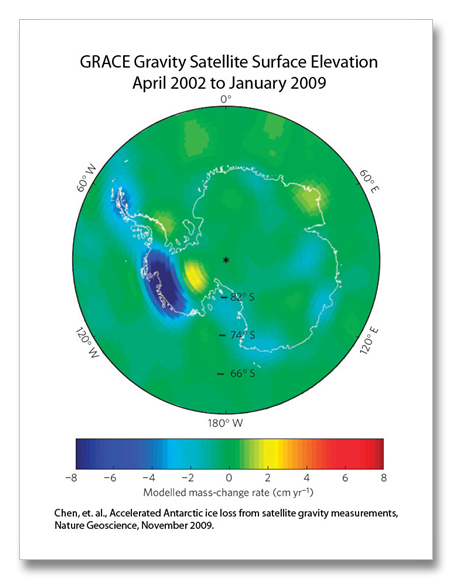 Recent studies using the new GRACE gravity measuring satellites (see here) have shown startling new results for ice melt / ice loss from Antarctica.  As the dataset from the new satellites, put up in 2003, grows larger, the melt / ice loss continues to grow. Previous studies have shown the melt/loss coming mainly from West Antarctica, but this recent analysis of the satellite data shows that in 2005/2006 east Antarctica’s ice loss accelerated from near zero to 57 gigatons of ice per year. West Antarctica showed an acceleration of ice loss at about this same time as well.

Overall ice loss from Antarctica is now 220 gigatons per year.  Remember too, The IPCC 2001 report said that Antarctica would experience no negative volume changes (no ice loss greater than snowfall) for at least 100 years. The 2007 IPCC report actually reduced sea level rise from 2001 by about a foot to 22" max. They limited the contribution to sea level rise from melting ice sheets to the rate observed from 1993 to 2003.