A few out there would have us believe that Arctic sea ice has rebounded since 2007 and that climate change is something other than what it is.  In the real world, what little is left of Arctic sea ice is so rotten and weak that it is no functional impediment to shipping – leaving the Arctic Ocean functionally in an "ice free" state.  More on that latter.  But now, the continued and unprecedented decline in Arctic sea ice needs to be understood. The "non-scientists" say that this year’s 2nd lowest extents estimate is not lower than the record 2007 area and this, along with the 2008 and 2009 estimates of Arctic sea ice coverage prove that sea ice in the Arctic is indeed rebounding. 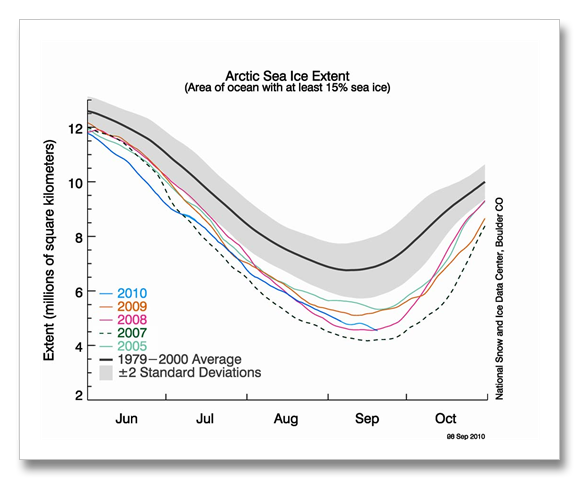 This revelation is a ruse. Chaos rules in Arctic sea ice as in the weather everywhere. In-fact, Arctic sea ice extents are controlled significantly by polar winds. The 2007 record was helped along by relatively out of the ordinary winds that pushed the ice together – bunched it up, increasing the amount of open water.

You see, large numbers of floating objects, in the absence of winds, tend to spread themselves out evenly over any water surface. Ice behaves no differently.  Arctic sea ice in mid summer is frail and broken into millions and millions of pieces. Winds push it around. So sea ice extent may not be the best measure of the quantity of sea ice in the Arctic.  It is a tool however, and it should not be misused. 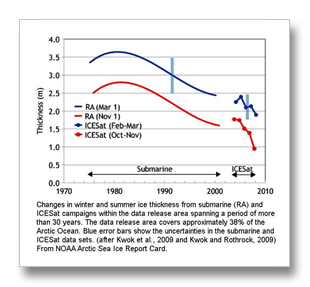 Another tool is ice volume, calculated from area extents and thickness.  From this tool, we know that sea ice in the Arctic has genuinely not "recovered" from the 2007 record. We have two tools to determine volume: The U.S. military submarine ice thickness records and the ICESat satellite thickness data beginning in 2005.

So even though ice extents tells a picture of sea ice coverage, ice volume tells even more. Ice volume is a product of ice and warmth. More warmth equals less total ice. As our planet warms, less ice is the consequence.

This phenomena is another of the climate feedback mechanisms.  Ice and snow reflect about 90% of sunlight harmlessly back into space. Open water absorbs about 90% of sunlight and changes into infrared energy – heat.  This heat is then trapped by greenhouse gases and stays on the planet. So, less ice increases the melt of the remaining ice in two ways: one is by warming the atmosphere through the greenhouse effect; the other is by warming sea water by the absorption of energy from the sun.

Feedback effects all work the same way.  Energy builds up in a system over time. It keeps building up without much happening. Then at some point at threshold is passed, a tipping point is reached and suddenly the system changes state. Think of leaning out across the gunwales of canoe. As you lean further, the canoe continues to lean with you until all at once, the canoe reaches that tipping point and suddenly flips over into the water. Ecosystems process are generally no different. This tipping point can be seen in the Arctic Sea Ice Volume Trend chart by Maslowski. 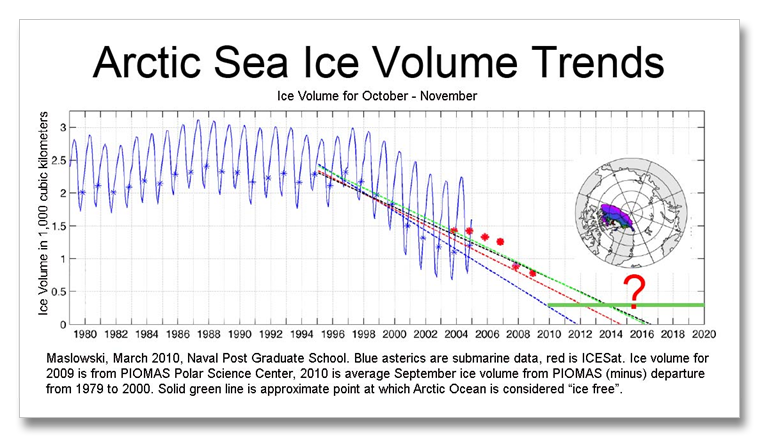 Since volume, determined from area extents and ice thickness, is the better measure of the state of Arctic sea ice, then we need to pay more attention to sea ice volume than sea ice extents. Extents can be influenced by the chaos of weather and the winds, as is evident in the 2007 extents record, but volume continues to decrease with no sign of the anomaly that was presented in 2007 by the winds of chaos. Ice volume has continued to drop, with no recovery evident.  The decrease in volume is so large that the U.S. Naval Post Graduate school says that we will functionally see an ice free Arctic Ocean between 2012 and 2016.

Maslowski’s graph, by the way, was first published in 2003. It has not changed since, only more data points have been added. The new data points seem to be following the original trend.

How large is the decline? It is about 10,000 cubic kilometers lower than the 1979 to 2009 average.  Considering that the average is about 21,000 cubic kilometers, this decrease is incredibly huge.  What does this mean?  It means that our planet is approaching an environmental state that has not been seen in 14 million years (see here).

In 2007 it was clear that Arctic sea ice melt was progressing 70 years ahead of the model’s predictions. See here and here. It was also clear that a tipping point had been reached and the rate of sea ice loss had accelerated.  This knowledge has not only remained the same, but become more robust as new evaluation techniques and more man hours are put into research. 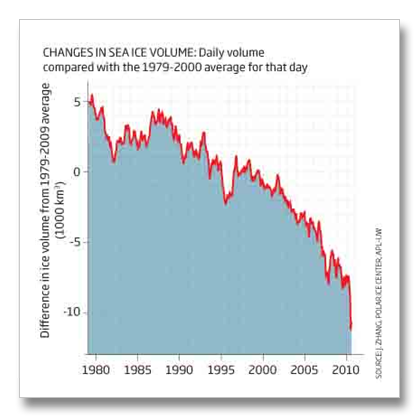 So, what is happening in the Arctic?  Ice that forms in the Arctic only stays there for four or five, maybe six years.  Then it is forced out into the far north Atlantic (the Barents Sea) and melts.  The Arctic Ocean currents, which never stop pushing ice around, simply flush the old ice out to the warmer non-polar sea. This happens every year, as it has been happening for over 14 million years.

Every year, the Arctic ice pack melts around the edges. New ice forms about six feet thick the first year, but forms more slowly subsequent years to reach a maximum thickness of about twelve feet. What we have been seeing happening in the Arctic – how we are losing so much ice volume, and how we continue to lose ice volume, even as ice coverage does not continue to fall, is that we are losing the multi year sea ice. The thicker ice no longer exists. Every winter, six and a half feet of ice refreezes from open ocean and then more than six and a half feet of ice melts in the summer. The thicker ice no longer exists in large quantities like it once did because there is just too much melt. The equilibrium has been disturbed.

From the International Polar Year (IPO) Science Conference in Oslo in June comes a report by  Dr. David Barber,  Professor of Environment and Geography, Canada’s Research Chair in Arctic System Science, and director of the Centre for Earth Observation Science (CEOS) at the University of Manitoba, Winnipeg.  Dr. Barber  has been searching for multi year Arctic sea ice in the Beaufort Sea an area of the Arctic Ocean that stretches for almost 1,000 miles along the coasts of Alaska and Canada. 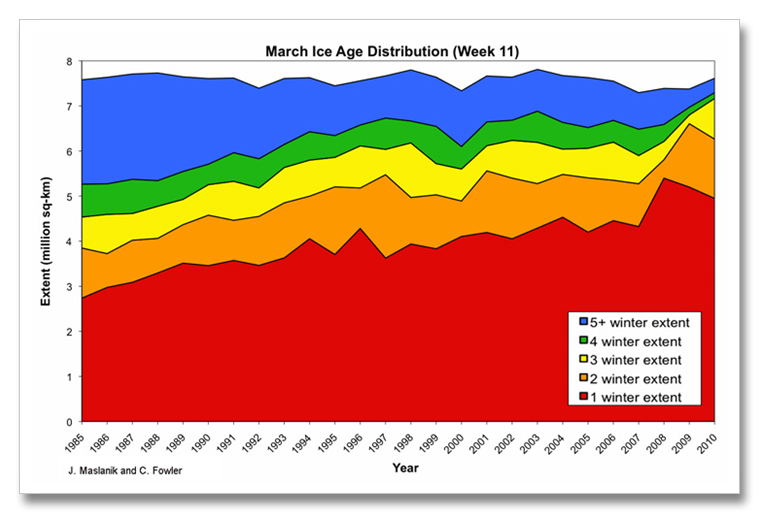 Multi year sea ice is that ice that has been around for more than two years.  Over 50% of the Arctic Sea has historically been covered with multi year ice. Average multi year Arctic sea ice is nearly 12 feet thick (NOAA). First year ice is around six and half feet thick. Sea ice thickens more slowly as it becomes older because of the insulation properties of the overlying ice and the warming effect of the underlying sea. At about 12 feet in thickness, winter’s cold can no longer produce thicker ice.

Research done for the International Polar Year evaluating satellite and U.S. military submarine sonar estimates of multi year ice thickness by Dr. Barber and his team of about 200 international researchers, found that within the submarine data release area (covering ~38% of the Arctic Ocean), the overall mean winter thickness of 3.6 m (11.8 feet) in 1980 can be compared to a 1.9 m (6.2 feet) mean during the 2008/9 winter of the ICESat (satellite) record – a decrease of 1.7 m (5.6 feet) in thickness. This combined submarine and satellite record shows a long-term trend of sea ice thinning over submarine and ICESat records that span three decades.

Barber’s cruise through the Beaufort Sea in the ice breaker Amundsen never did find that multi year ice. In-fact, the ice he did find was so rotten that it did not impede the forward progress of his ship (see Geophysical Research Letters – Perennial pack ice in the southern Beaufort Sea was not as it appeared in the summer of 2009). This came as a great surprise to the good professor and as he cruised through the rotten ice of the Beaufort sea at 24 km/hr (the top speed of his vessel in open water is 25 km/hr). The Amundsen was designed to break one meter thick sea ice at 5.5 km/hr. The ice they found was so rotten that the Amundsen could break 6 to 8 meters (19 to 26 feet) of rotten multi year ice at 9.3 km/hr (5.5 mph).

You see, the satellite microwaves that "see" the Arctic sea ice appear to have a problem. Part of what Dr. Barber was doing in the Beaufort Sea is a normal part of science everywhere. He was verifying the remote sensing data.  This data said that the Beaufort Sea was full of thick first year and multi year ice. This kind of ice is a significant impediment to icebreakers. They can move through it, but not very quickly. Have you ever tossed a rock out onto a frozen pond in early spring?  You know the ice is unsafe, but it looks like it could still hold you up.

Yet that fist sized rock you lobbed up in a pop-fly to short left field punches through eight inches of ice like it was a wet paper towel. What Barber found in the Beaufort Sea was a wet paper towel. So why have we not found out that our microwave satellites are not seeing what we think they are seeing?  The reason is likely that these kind of conditions have obviously not happened before, or they were not happening when these instruments were first confirmed – before they were sent into space. Obviously again, we have not approached an ice free Arctic in 14 million years. could these conditions be a precursor to an completely ice free Arctic? A story in Reuters says it well: "In November last year Barber spoke shortly after returning from an expedition that sought – and largely failed to find – a huge multiyear ice pack that should have been in the Beaufort Sea off the Canadian coastal town of Tuktoyaktuk. Instead, his ice breaker found hundreds of miles of what he called "rotten ice" – 50-cm (20-inch) thin layers of fresh ice covering small chunks of older ice. "From a practical perspective, if you want to ship across the pole, you’re concerned about multiyear sea ice. You’re not concerned about this rotten stuff we were doing 13 knots through. It’s easy to navigate through. I would argue that we almost have a seasonally ice-free Arctic now, because multi  year sea ice is the barrier to the use and development of the Arctic," said Barber."

Barber et. al., Perennial pack ice in the southern Beaufort Sea was not as it appeared in the summer of 2009, Geophysical Research letters, December 2009