Arctic Sea Ice Chaos, a Warmer than Normal Canadian Winter, Climate Contrarian Propaganda and the Media Gets It Wrong Again

Here is a hint that will help you to recognize climate contrarian propaganda.  If a reporter, or a "scientist" for that matter, talks about the Arctic Ice Cap – feel free to ignore them – there is no such thing. You can be assured that what follows "Arctic Ice Cap" will be as much fiction as is an Arctic Ice Cap. An ice cap is a small ice sheet. Ice sheets are grounded on land, either above or below the ocean. An ice sheet is what covers Antarctica and Greenland. There are ice caps in Alaska, the Himalayas and the Andes .Sea ice is what covers the Arctic Ocean and the north pole, and in the winter, sea ice around Antarctica nearly doubles the area at the bottom of the world that is covered in ice. Sea ice is no thicker than about ten feet, unless the tides and ocean currents have been smashing it together into giant pressure ridges.

An unknown (to me) media source out there has put out a story about the Arctic Ice Cap and of course all of the other media kids have copied it and now everyone is using the Arctic Ice Cap phenomena incorrectly.  The misinformation of course is magnified by the media’s good intentions of portraying two sides to every story, only one side of this story is fiction.  the different articles are variously spreading the word that ranges from climate change is bunk because the ice cap has recovered to normal, or adding more doubt to the climate change doubters chest of hope by quoting a recent paper that says that Arctic "winds" were responsible for 30% of the sea ice loss in the record 2007 year. 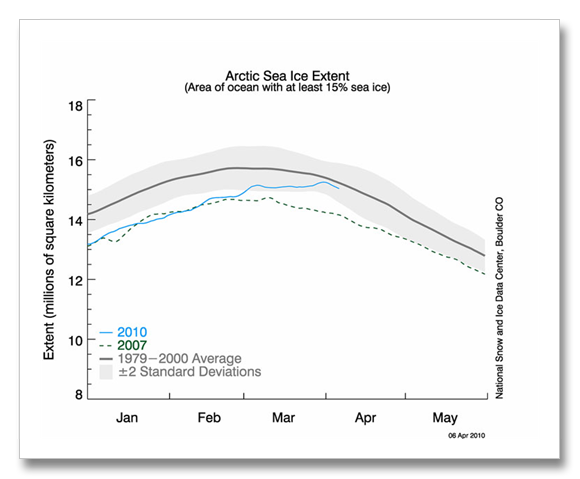 Arctic sea ice has gone from a record low in late January to near average this month – pretty crazy, nothing more than natural chaos.  Northern Canada had a very warm winter, so warm that the harp seal crop in the Gulf of St. Lawrence in eastern Canada, was saved.  In 1987 Canada banned the harvest of the baby harp seals with their white coats, but adult harvest has continued. The white pups caused world tumult when it was made common knowledge that the hunters walked out on the sea ice and clubbed the seal pups to death.  Well, this year there was little to no sea ice (an exceedingly rare condition) so no clubbing took place and the seals were saved? Harp seals are one of those ice dependant seals, they calve and raise their pups on the ice, so what happens when there is no ice as happened this year?   This clip from the Canadian Press, and a short quote from Mark Serreze at the US National Snow and Ice Data Center says what the propaganda machine would rather the public not know about Arctic sea ice this year:

"Northern sea ice is nearly back to average levels globally for the first time in at least a decade after years of spectacular declines. The surprise growth at a time of year when ice is normally melting has triggered a blizzard of I-told-you-sos among online climate change skeptics. But the man whose data is behind the furor says a few weeks of cold weather in one part of the Arctic – not an end to global warming – has skewed the numbers. Mark Serreze of the U.S-based National Snow and Ice Data Center says ice in most northern waters, including Canada’s eastern regions, is still well below average. He says skeptics should be careful to distinguish between weather – which is local and short-term – and climate, which covers broad stretches of time and space."

Back to the propaganda and the media’s good intentions. The study that finds that Arctic winds are responsible for 30% of the record 2007 Arctic sea ice loss?  Not so fast.  I am familiar with the paper, and actually there have been several since 2007 that show that changed wind fields are responsible for ice being blown out the Fram Straights east of Greenland, this is not new. What is new is the media highlight. What is also not new is the projections of the U.S. Naval sea ice researchers that projected that the Arctic will be ice free in the summer as early as 2013 to 2020. The first projection of this condition was made in 2003. This is of course four years before the record 2007 minimum ice extents took place. The reporting of the new study about the winds however is given credence as ‘casting doubt" on other scientists cautioning statements about Arctic sea ice is decreasing more rapidly than projected.

Arctic sea ice is indeed decreasing in aerial coverage more rapidly than predicted. It is doing so some 40 to 70 years more rapidly than predicted. Temperatures in the Arctic have changed all over by 3 to 4 degrees, 6 to 7 degrees in many places and in northern Siberia, the temperature has warmed up to 9 degrees, all in the last 20 or 30 years.  This warmth has either changed polar wind fields or in some cases has been caused, or increased by changed polar wind fields. They are all inter-related and all are a result of climate change. So any reporting that the winds are to blame and not climate change is like saying that Jack the Rippers knife was the one responsible for all the murders, not good ol’ Jack.