Arctic Sea ice had the second lowest recorded extents this season, but alarmingly, volume was the lowest ever recorded. The lowest volume record was set because much of the remaining ice in the Arctic is only first year ice. Normally the majority of ice at the top of the globe is multi-year ice, which is six to fifteen feet thick.  This 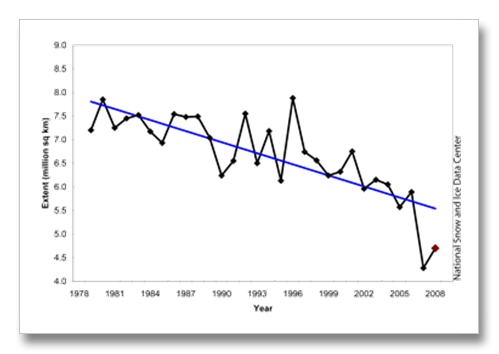 year most of the ice is only about three feet thick because the old multi-year ice has either melted away or was flushed out into the Atlantic Ocean. This is causing many sea ice scientists to re-evaluate their already foreshortened predictions of when the Arctic Ocean will become ice free in summer.

Loss of Arctic sea ice sooner than anticipated, some 60 years sooner than the IPCC suggests, will significantly affect the heat balance of the planet and the ultimate reality of the predictions of the climate models.  Without that extra ice at the north pole reflecting 90% of incoming solar heat (remember, water absorbs 90% of solar heat) something in climate will change.

There will obviously be a lot of extra heat running around, the implications of which are unknown.  last winter season, after that huge Arctic sea ice loss in 2007, we saw one of the snowiest winters in the northern hemisphere in a long time. Temperatures were not all that cool, but they were not particularly warm either – globally only the 31st warmest and in North America, the 49th coolest (out of 127). Does this mean that the extra open water in the Arctic has a counter intuitive affect on climate?

We don’t know, and it will likely be some years before we do know.  What we do know however is that or climate has changed and the additional heat input into the climate because of the sea ice crash in the north will significantly compound the climate changes that we are seeing.

Possibly the most amazing thing about this melt season was that it was so much cooler and cloudier than the 2007 season. coming as close as it came to beating the record shows that it is very likely that the Arctic has indeed crossed the threshold and entered a new ice state.