Austin, Texas: The Blizzard of ’21 – Summary and Photo Tour by Bruce Melton 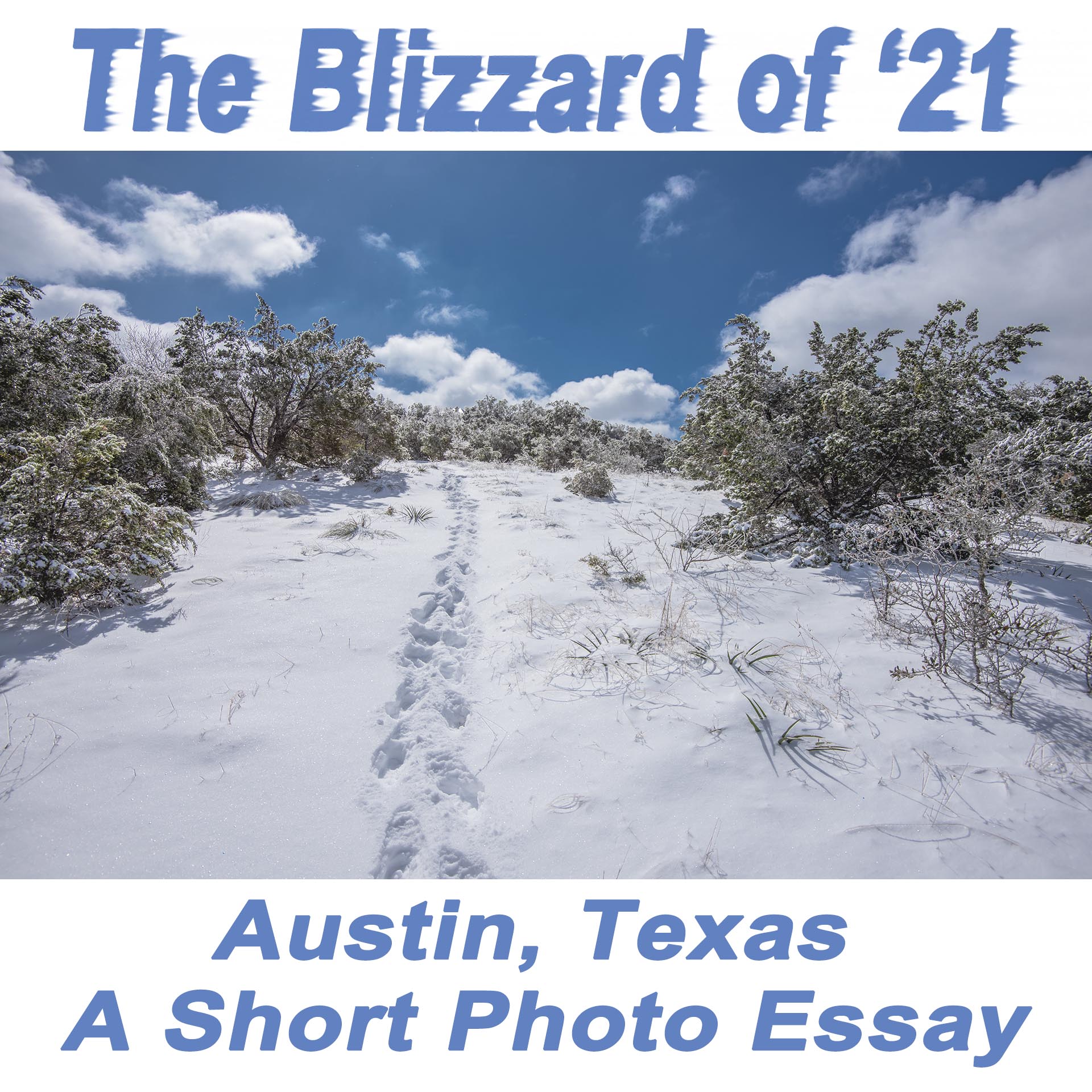 Austin, Texas: The Blizzard of ’21 – Summary and Photo Tour by Bruce Melton

By 10 pm on February 14, this map was updated with winter storm warnings (pink) issued for every county in Texas, Oklahoma and Arkansas.

They say it will rival the Hurricane Harvey disaster. These fantastically extreme climate change-caused events will not only continue, they will increase in extremeness nonlinearly — like an avalanche — unless we restore our climate to a temperature much cooler than today.

It wasn’t a blizzard by the meteorological definition, it was a tremendous disaster nonetheless. Technically, the polar vortex collapsed because of sudden stratospheric warming due to a global teleconnections from a tropical disturbance in the equatorial Pacific allowing Arctic air to spill much farther south than normal. In our old climate, this was a rare enough event to break all-time records by large margins.

It’s happened before, it’s likely happening more often because of climate change. The results this time have been nothing short of astonishing. Austin endured a winter storm so powerful and long-lived it broke the previous below freezing record by 52 hours at Austin Bergstrom, from 112 hours in 1951 to 164 hours. From a climatological perspective however, the most astonishing part may have been that Austin had only experienced a relatively few hours below freezing the entire winter prior to the storm. 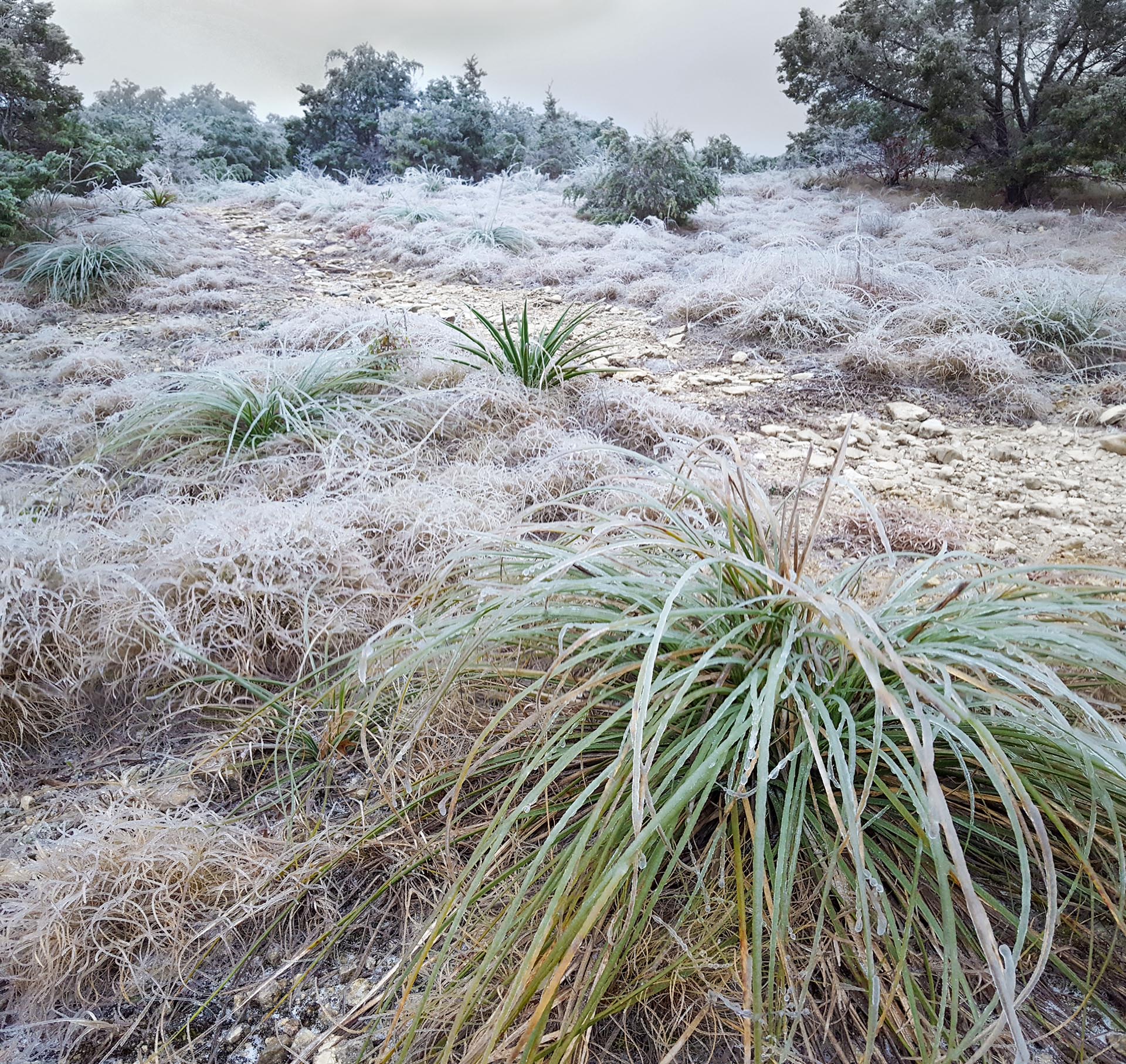 It started with an ice storm on Saturday, February 13. Some parts of our region were devastated. Some parts of the Hill Country in the Fredericksburg to Burnet area still do not have power because of downed power lines and broken power poles. By Sunday evening it had started to snow as the temperature dropped to the low 20s. Six to eight inches fell by Monday morning paralyzing most of the state. 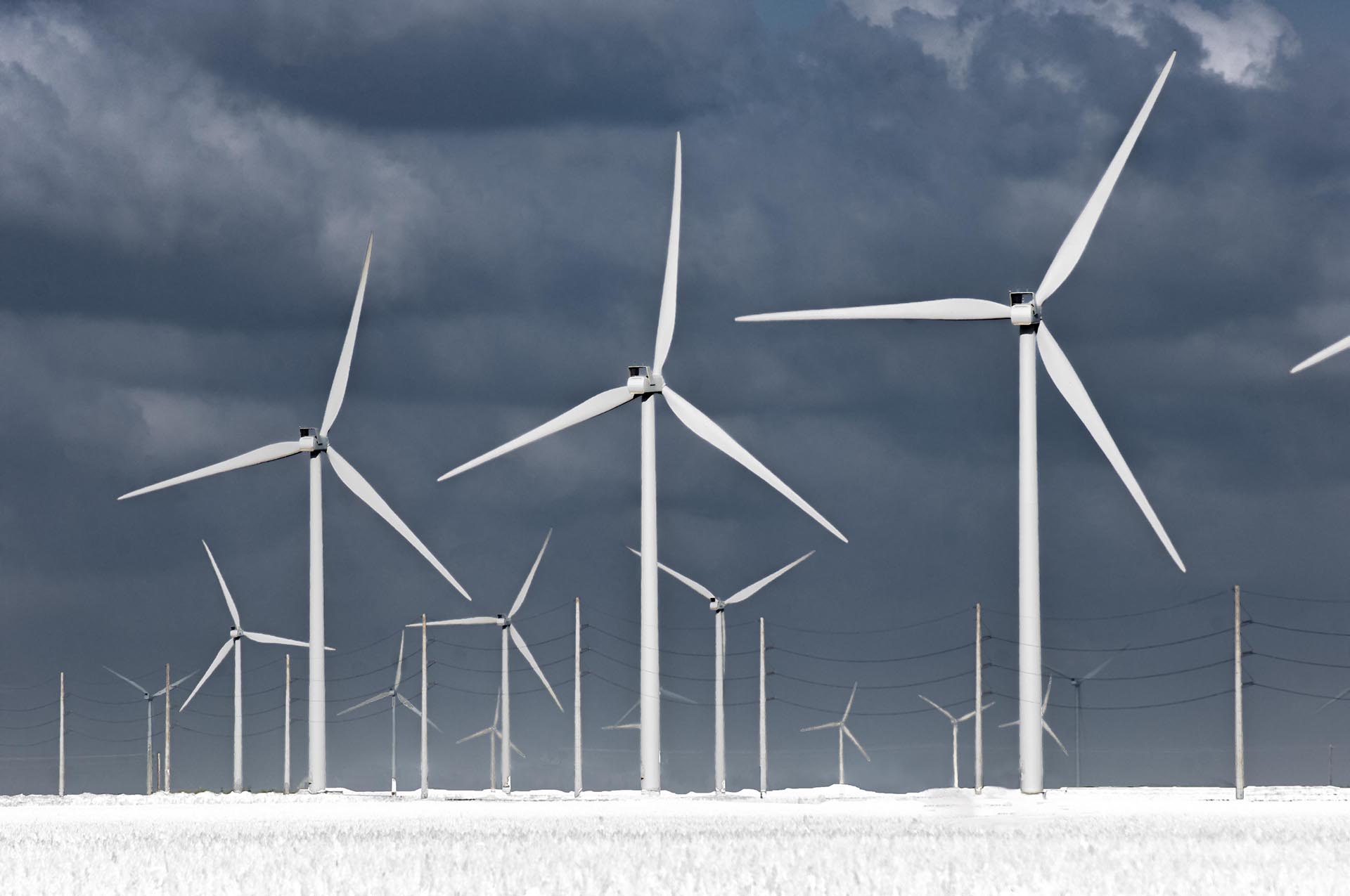 West Texas wind turbines, along with natural gas, coal and nuclear energy generation, were frozen and inoperable because Texas electricity generators were not required to weatherize like in the northern tier of the US and in Canada.

Reports of wind generation failure were wildly overblown through inaccurate communications from the Electric Reliability Council of Texas (ERCOT) and the Texas Governor Greg Abbott. ERCOT reported 16 gigawatts of wind generation frozen, but only 7 gigawatts were available before the storm because of normal planned maintenance outages. Fossil fuel outages because of the storm, including a down unit at the South Texas Nuclear Project, amounted to 30 gigawatts of failed generation.

The rolling blackouts from generation failure started at 1:30 am Monday morning as temperatures fell into the low teens. As the generation failures mounted it quickly became apparent there was not enough power to turn the electricity back on to those who had already gone dark. Over 40 percent of the Central Texas region and 40 percent of all of Texans were without power. Most of them for four days. 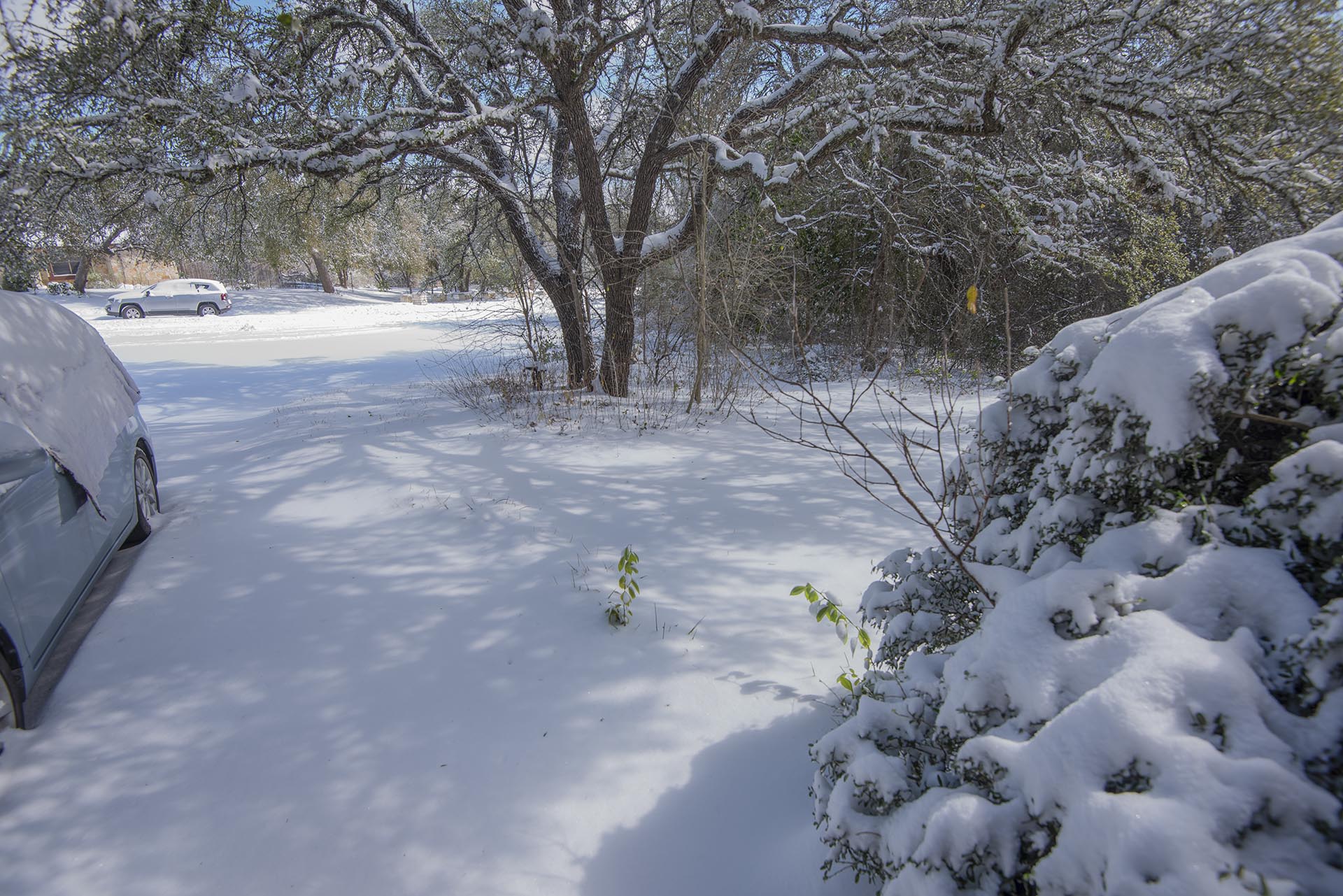 The Urlich Water Treatment Plant, Austin’s largest, went down when its power failed and staff could not get the emergency generators switched over to operate the facility for three hours. Along with dozens of broken mains, a boil water notice was issued for over a million people. 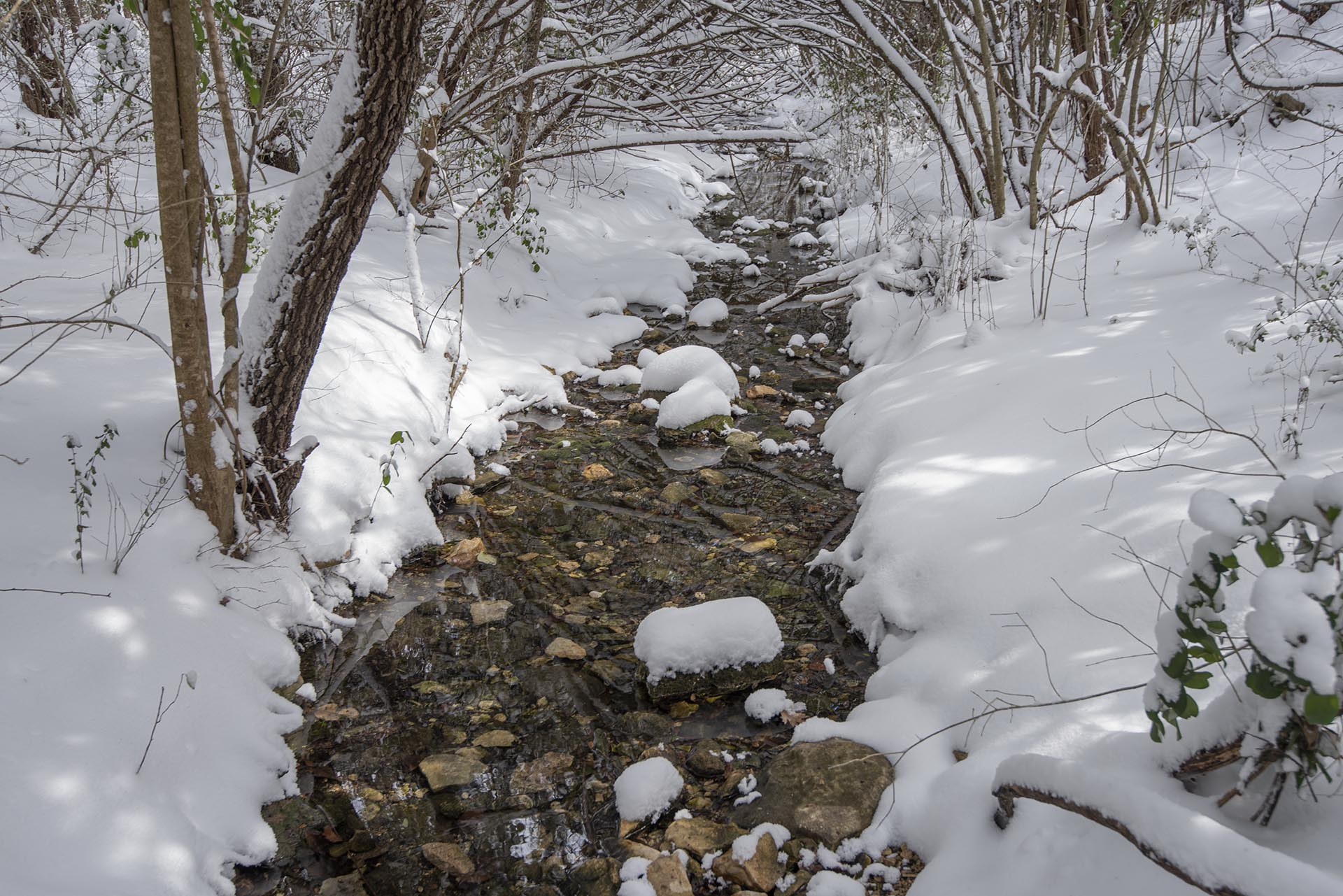 The stories are all too familiar. One member’s home fell to 40 degrees. Members all over saw their water service fail. Pipes froze and broke, flooding destroyed carpets and wood floors and collapsed ceilings. Hospitals had to resort to using cat litter for humans. All hospital beds in the region were full causing a member to wait 36 hours for a critical care bed. 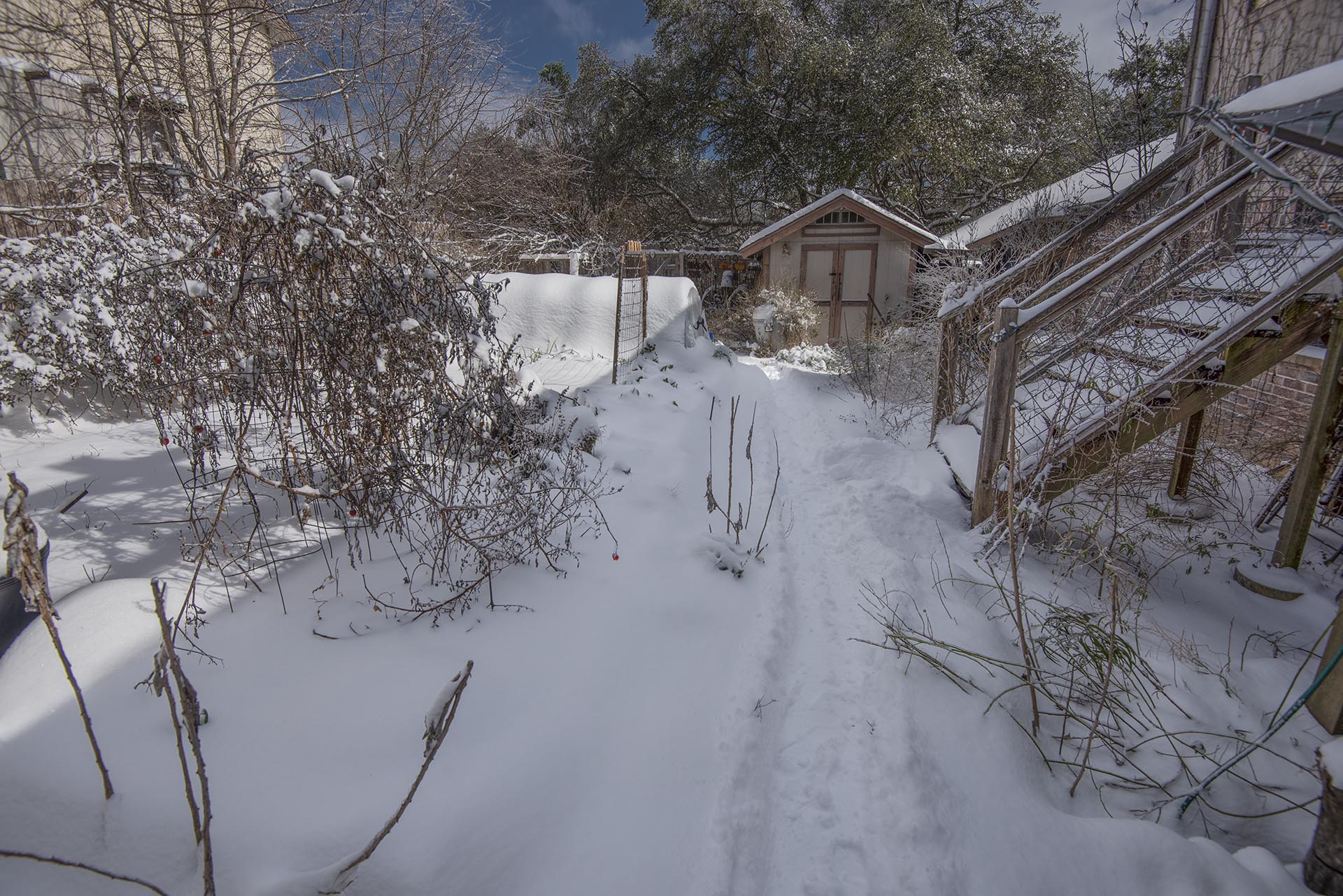 The author’s veggie garden in Oak Hill. It’s on the left. There is a lone cherry tomato hanging from the dead vines near the center of the image.

Reporting that scientists say it is uncertain whether or not this disaster was caused by climate change is based on long-term statistics. Because so little time has elapsed since our climate has changed, and because we know that the additional energy in a warmed climate creates nonlinearly more extreme weather events both warm and cold, because climate scientists have been warning us for nearly 30 years that things like this would happen if we delayed action on climate pollution reform, and because we have seen so many of these supposed rare events lately, it is imperative that we view these disasters as caused by climate change. Anything else gives us license for continued delay in action where future extreme events will likely be far more powerful.

The reality is, because our climate has only recently changed, it is much more probable that these repeated disasters are common events in our changed world, because there has simply not been enough time elapsed since our climate has changed for rare weather events to occur. What’s more, even if we were to magically halt all warming tomorrow morning, because the extreme events we have already seen are likely common in our new climate, we can expect weather disasters to become far more extreme than what we have recently been experiencing as we see more and more rare events actually occur as time passes. Importantly, this does not include increasing extremeness because of further warming.

The analogy is what we are most probably seeing now is in the 2- to 10-year occurrence range of weather events that recurs on average over the long term every two to ten years. The change in extremeness as a weather event becomes more rare is not linear, but one can get a good idea of the extremeness yet to come by using a simple comparison: the 100-year storm is 50 times more powerful than a two-year storm and 10 ten times more powerful than a ten year storm. 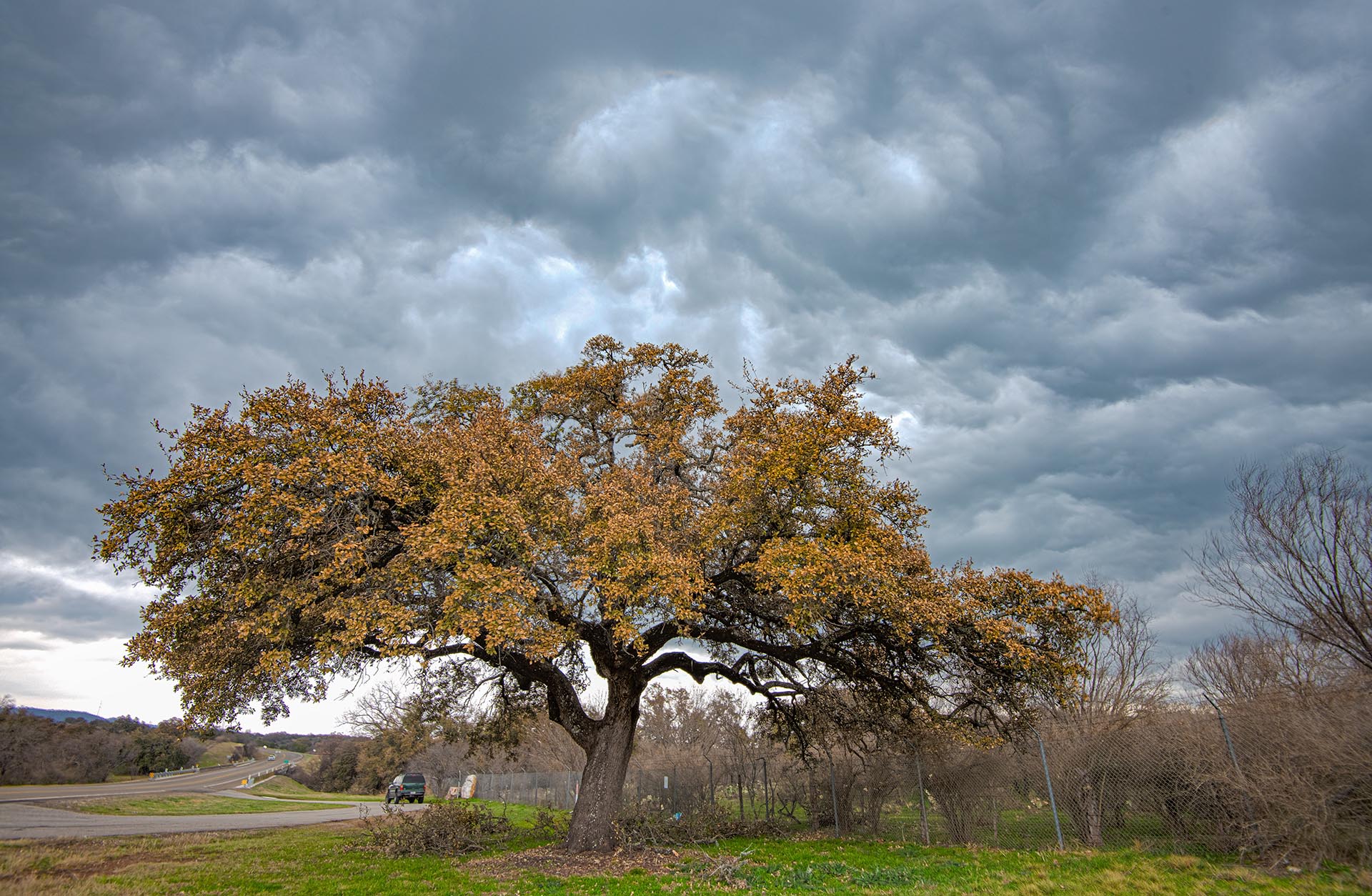 This is a live oak on SH71 near Packsaddle Mountain south of Llano. Across the region, live oaks are uncharacteristically brown, straw-colored, or this beautiful golden color above. Live oaks are labelled such because they retain their green leaves all year long. They do lose their leaves annually, but it happens in the spring. Live oaks normally brown off a little before new growth in the spring pushes the old leaves off, but often the live oaks green leaves simply fall and are replaced by new spring growth. Senior biologists and old-timers alike have never seen anything that compares to the brown-off with this storm. All agree, the widespread nature of the live oak brown-off with this disaster will hopefully not result in mass mortality. What it will result in is stress and stress in long-lived species is generally cumulative. A report on the health of Central Texas forests in 1998 showed that live oaks were likely still stressed at the time from the Drought of Record in the 1950s. The new Drought of Record set in 2011 to 2013, was so severe it killed 300 million trees across Texas.

It was 2 degrees on my good thermometer in Oak Hill on Tuesday morning and it was 7 degrees at Camp Mabry near downtown Austin. Eleven days before it was 85 degrees at Camp Mabry. Eleven days after it was 86 degrees at Camp Mabry. Temperature swings like this are exceedingly rare and the results can be devastating to the natural world. Plants become accustomed to cold temperatures as winter progresses by building up antifreeze chemicals and progressing deeper and deeper into dormancy as the depths of winter approaches in January and February. Sudden freezes often damage and kill plants because they have not acclimatized. We don’t know how extensive mortality will be, only time will tell.

Very few live oak leaves were not killed by the ice disaster. This shot was taken on SH71 between Oak Hill and Bee Caves. 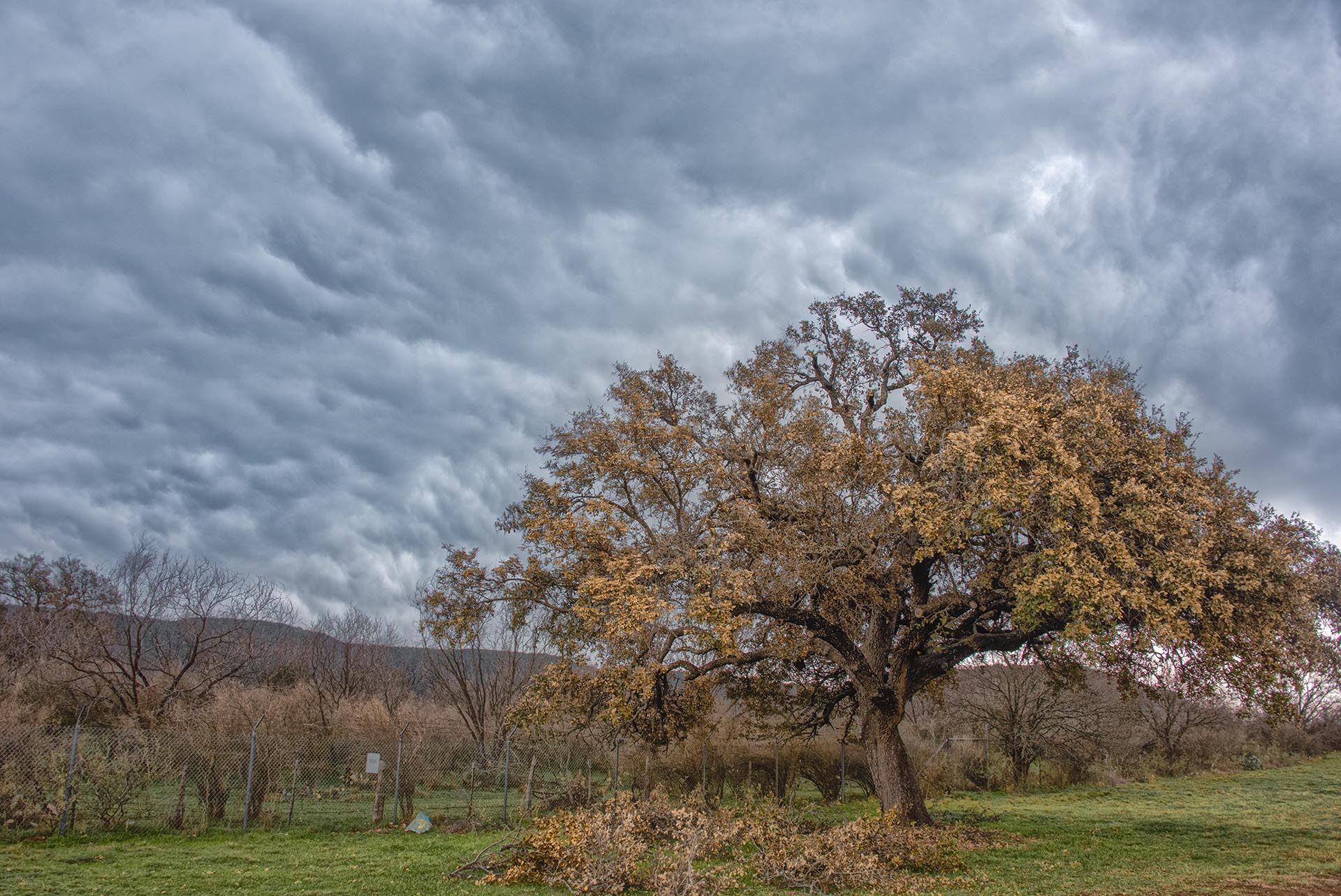 Another golden oak on SH71 near Packsaddle Mountain. Note the broken limbs from ice damage on the ground. The cloud formation is the result of a passing cold front. 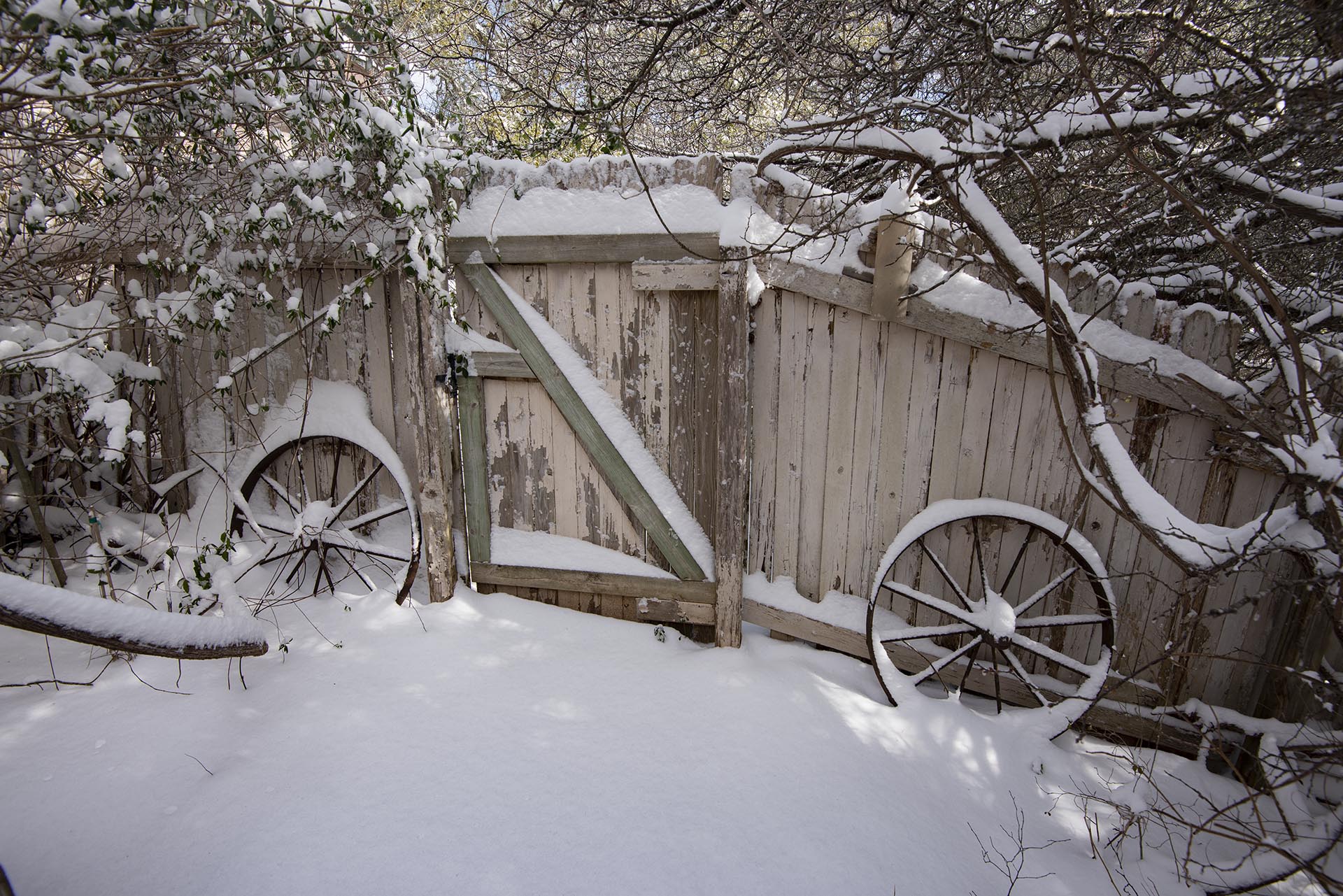 The author’s back yard, Oak Hill. 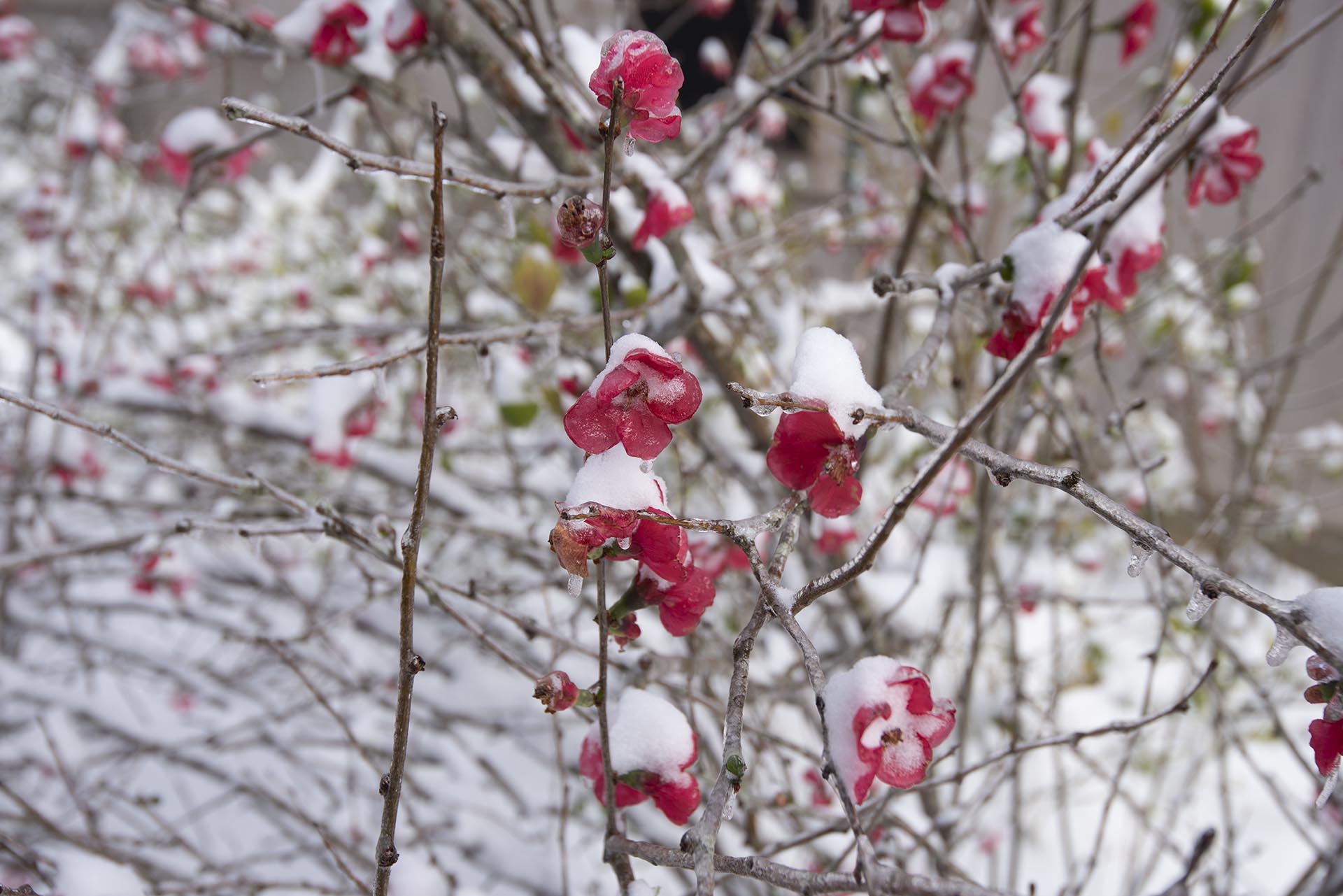 This is a flowering quince in the author’s back yard. It was in full bloom when the storm hit. Usually, even a hard freeze will not significantly damage quince. This time, all the flowers were frozen off. A few days after the storm, those parts of the quince shrub that were beneath the snow line began blooming again.